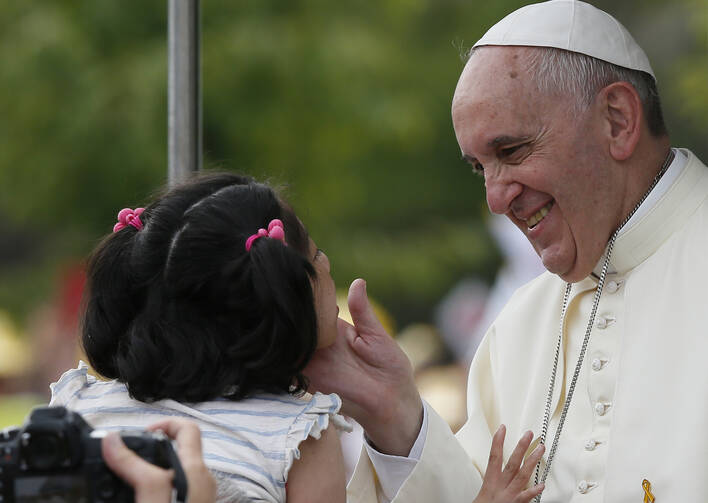 Pope Francis greets a girl as he arrives to at a rehabilitation center for people with disabilities in Kkottongnae, South Korea, Aug. 16. (CNS photo/Paul Haring)

Jorge Bergoglio needed just a few minutes to radically reorient the Catholic Church. In the days leading up to a conclave, cardinals deliver addresses designed to help their brothers discern where the Spirit is calling the church. Some go longer, some shorter. In his 2013 pre-conclave intervention, Cardinal Bergoglio did not waste his time.

“In Revelation,” the soon-to-be-pope explained, “Jesus says that he is at the door and knocks.” The idea, he continued, is that Jesus is knocking from outside the door. But Cardinal Bergoglio inverted the image and, according to notes he later gave to Cardinal Jaime Ortega, asked his brother cardinals and indeed the whole church to consider “the times in which Jesus knocks from within so that we will let him come out.” When the church keeps Christ to herself and does not let him out, he continued, it becomes “self-referential—and then gets sick.” To avoid this, according to Cardinal Bergoglio, the church must go out of itself to the peripheries, to minister to the needy.

This is evangelization. This is the mission entrusted to the church by Jesus Christ—and it was precisely in this moment that he foreshadowed his program for the Catholic Church as a “field hospital” for the wounded, a profound, indeed stunning image he would deliver in a surprise interview with Antonio Spadaro, S.J., soon after he became pope.

By calling the church a “field hospital,” Pope Francis calls us to radically rethink ecclesial life. He is challenging all of us to give priority to the wounded. This means placing the needs of others before our own. The “field hospital church” is the antithesis of the “self-referential church.” It is a term that triggers the imagination, forcing us to rethink our identity, mission and our life together as disciples of Jesus Christ.

By calling the church a “field hospital,” Pope Francis calls us to radically rethink ecclesial life.

Medics are useless if the wounded cannot reach them. Those who have the bandages go to those with the wounds. They do not sit back in their offices waiting for the needy to come to them. The field hospital marshals all its institutional resources in order to serve those who most need help now.

Francis the Witness: The pope presents a fresh vision of the Gospel
Blase J. Cupich

When the church becomes a field hospital, it can radically change the way we view our community life. Instead of being defined as a group of people that live in the same neighborhood, have a common ethnic heritage or social status, regularly go to Mass or are the registered parishioners, we understand ourselves as those who take up the work of healing by sharing in the sufferings of others. We are a community that taps into and shares our talents to find creative ways to help those most in need. We already know this about ourselves, as Jesus gave us this truth at the very start of his ministry when he announced that he was sent “to bring glad tidings to the poor, sent to proclaim liberty to captives and recovery of sight to the blind, to let the oppressed go free, and to proclaim a year acceptable to the Lord” (Lk 4:18).

That is Christ’s challenge for the church today: to be a field hospital for the needy. To bring those glad tidings, not to sit back and wait for those who need them to ask. To go out, to travel to the peripheries where the oppressed reside. To be with the wounded on the field of battle. This is what is acceptable to the Lord. It is radical. Mercy always is. And as Pope Francis continues to remind us of this truth, he takes us back to our Christian roots, helping us realize that this challenge has been with us all along.

Cardinal Blase J. Cupich is the archbishop of Chicago. This article is excerpted from A Pope Francis Lexicon, which will be published by Liturgical Press on Feb. 15.