Francis the Witness: The pope presents a fresh vision of the Gospel 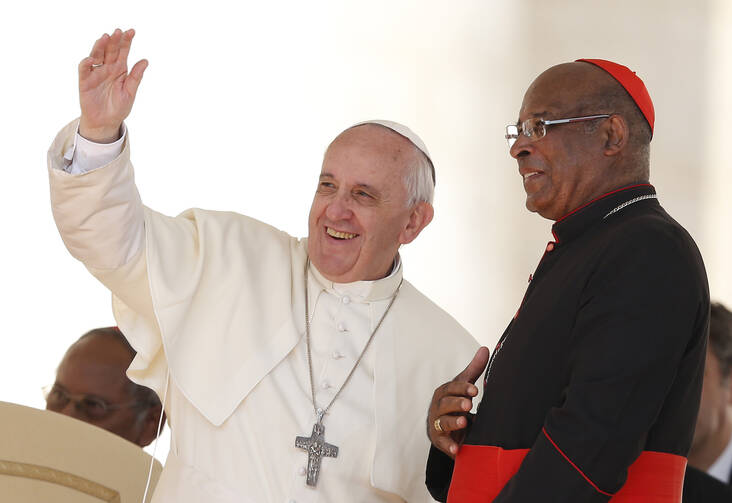 Reporters and commentators, both secular and religious, are reading the tea leaves, trying to find hidden meanings and clues by parsing and analyzing the pope’s interview published in Jesuit periodicals. What did he say and what didn't he? Do his words signal major changes in policy and practice for Catholics?

David Brooks feels this approach is a distraction from the real power of the interview. In his comments on the interview with Pope Francis during the PBS NewsHour on Sept. 20 he said, "What we should focus on is the personality of Francis, a remarkable personality...a gorgeous personality of humility, of spirituality, of religiosity. If you just read that interview, you see a man you tremendously admire, who I think is going to have a tremendous effect on the world.” In other words, Francis shows himself as a witness more than a teacher. He is teaching because he is a witness and being a witness he reveals himself. This should be our focus, Brooks suggests. No interpretation, no parsing is needed. Instead of reading the tea leaves, we should drink the tea.

Pope Francis tells us who he is by pointing to Caravaggio’s St. Matthew: “Here, this is me, a sinner on whom the Lord has turned his gaze.” He is telling us that he has experienced the same rush of speechless wonder and graced love Caravaggio depicts in his painting. In a darkened corner flooded by sudden ray of light, the tax collector sits in stunned disbelief that he is being singled out for discipleship. This is Jorge Bergolio’s story. The impact of seeing the face of God anew, a face which radiates first and foremost with graced compassion, has changed his life. But, even more, it has left him with an unquenchable thirst “to know the Lord more and follow Him more closely.”

As a result, all other attachments are relative and he is centered in pursuing more and more the One who mercifully loves him, seeking God, discerning God’s activity and will in all things. This is why he is patient, not impulsive in making decisions; why he is attentive “to the things that happen, the feeling of the people, especially the poor,” and why thinking with the church means being part of “the people of God on the journey through history, with joys and sorrows.”

The point is simple. His words cannot be understood apart from his witness. In this interview, content and form converge. Analyzing it for hints of particular changes in ecclesial policy and practice may be more entertaining, but, like entertainment, it is a diversion. We should focus on a person who reveals himself as a fresh witness of the Gospel, who is stirring our hearts to take up the journey with him as a fellow disciple with new vigor and purpose. His words and witness are an invitation to humbly and actively seek God working in the world and in the people called to be God’s own.

Each of us needs to take the time to reflect on how to respond to this “extemporaneous encyclical,” as the commentator Michael Gerson calls it. But, even now, as a diocesan bishop for 15 years, I can already identify some areas of my ministry of teaching, sanctifying and governing that will benefit. These initially come to mind:

1) Catechesis, preaching and passing on the faith must not only be about educating the members of our communities in the content of our tradition. This is important, but it must equally be about developing their spiritual sensitivity to the ways God manifests His presence and action in the world. Schooling people in the ways of ongoing discernment produces a greater receptivity to the tradition of the church and at the same time creates the freedom that will make them more responsive to the will of God throughout their lives. This balance is in keeping with the Lord’s great commission: “Go teach and make disciples.”

2) Pope Francis’ emphasis on the ongoing discernment of the action and will of the ever-merciful One also has implications for our worship and the promotion of communion among Christians. As the source and summit of Christian life, the liturgy needs to be the celebration that reveals His saving and redeeming work taking place through and in the midst of the people called to be His own. Reflecting that aspiration more fully in our multicultural communities makes the task of inculturation all the more urgent.

3) Similarly, instead of a minimalist approach to promoting ecumenism by healing differences and reconciling the past, the work of Christian unity becomes foremost an opportunity to look for how God is working in our separated brothers and sisters and “recognize what the Spirit has sown in the other as a gift for us.”

4) Collaborative governance needs to be more than calling on the advice and competence of others to make up for our episcopal shortcomings. Rather, governance involves seeking how God is revealing his work through others in the community.  Rather than limiting our consultation to those with financial and legal abilities, we also need to listen to those who work side by side with the poor each day, and who are on the frontlines in health care, education and other fields of ministry. We diminish our effectiveness when we do not call on these brothers and sisters to gain insight before making decisions in these areas. But, even more importantly, we pass up the chance to see how God is working through them and to more fully know God’s will.

Francis offers the witness of one who has personally internalized and who himself lives what he preaches and proclaims. This is the essential feature of true evangelization, which Paul VI had in mind in “Evangelii Nuntiandi” (1975): "Modern man listens more willingly to witnesses than to teachers, and if he does listen to teachers, it is because they are witnesses." Ultimately it is only the witness who convinces people, not the teacher.

This is why Brooks calls him a gorgeous personality, and like others, admires Francis, the humble witness, as one “who is going to have a tremendous effect on the world.” The effect is already being felt. It is time to put away the tea leaves, and drink the tea.

Most Rev. Blase Cupich is bishop of Spokane.

Show Comments (
4
)
Comments are automatically closed two weeks after an article's initial publication. See our comments policy for more.
Wendy Posh
9 years 4 months ago
From a witness, I have a brother who is Mormon, they give a very good witness to Family and Pro-life, but without a teacher who is to know what is true?
Raymond Dombkiewicz
9 years 4 months ago
I’m a little confused when you say “without a teacher.” Just need clarification, not drawing a conclusion. Do you mean teacher in the Catholic sense that Christ built His Church on his apostles with the command to preach to all nations, or in the Protestant sense of self-instruction based on the Bible alone, or that no one is actually teaching the Faith, or that if they are, they have done a pretty horrible job of doing it? If you are a Christian, is not Christ the First Teacher? If so, then how are we to pass on his message when we only live on Earth for a short time? My argument for sound teaching: In Christ’s time there were no such things as IVF and cloning. How could he ever speak on such things with understanding? Yet there are many folks who believe that if it is not specifically stated in the Bible, “anything goes.” How do we apply Christ’s words to today’s moral dilemmas? Who is to say what truth is? Do we leave it up to Pilate—the state? We trust English teachers to teach us English; we trust scientists to teach us science; we trust doctors to treat us and cure us of our ills. Who do we trust with Christ’s message? We have free will, we have reason, we have divine inspiration, and we have the Holy Spirit who guides the Church and inspires us. Humans desire sound teaching and the truth-Christians or Atheists or otherwise. I will submit myself to the truth of the Church by teachers of the Church whom I believe are guided by the Holy Spirit. The teachings of the Church are inspired in my opinion; however I will speak up if I think any bishop, priest, or nun speaks in error. I have Aquinas and Augustine to back me up!
Raymond Dombkiewicz
9 years 4 months ago
OK Marie, I see that you need to win the combox fights and continue to ignore every meaning and explanation I put forth. I’ll not belabor the arguments further, although it is maddening to me that you continue to misinterpret what I say, and to assume like they say. It’s one thing to have a difference of opinion when the facts are clear, but to put forth a wrongful interpretation of what another person says, to insist on it, and then condemn him for it is nothing more than willful ignorance. Or maybe its ideology or denseness (“Thick like a Brick”), I don’t know. It’s time to clean the dust off my feet and sandals and walk away. The end!
Marie Rehbein
9 years 4 months ago
If you cannot see how you view and describe people will be what stands in the way of your following the lead of Pope Francis, then there is no more that I can say. However, it is perfectly clear to me that describing a "difficult" (for you) to reach person as characterized by a history of frequent abortions, when there are no such people, you are throwing obstacles into your own path and using them as excuses for not being someone through whom God can reach those who are not aware of God's goodness. It would be far more honest of you to say that you do not like some people because of the sins they commit and thus put yourself into God's hands in case God wants to "lead you into temptation" in order to reach someone.