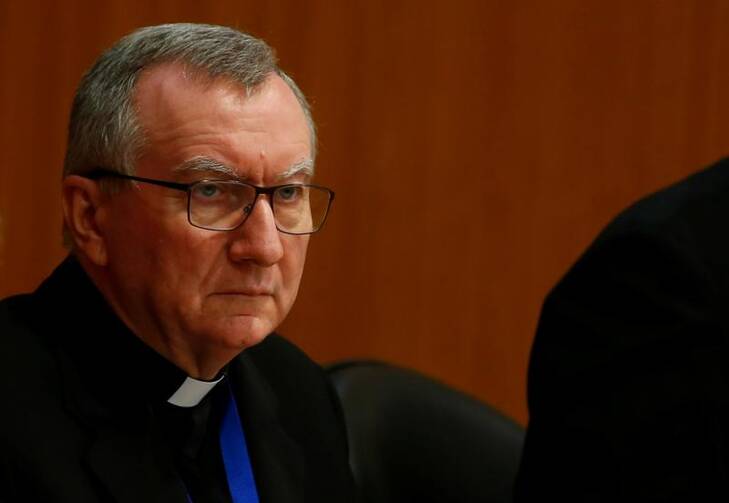 “We must work to take control of the development of the digital world, so that it might be at the service of the dignity of minors,” Cardinal Pietro Parolin, the Vatican Secretary of State, said in his keynote address at the opening of “Child Dignity in the Digital World,” the first world congress focused on addressing the dangers children and adolescents face on the internet.

Addressing the 140 participants from all continents at the Oct. 3 - 6 congress, at the Gregorian University in Rome, Cardinal Parolin said everyone present knows that “the sexual abuse of minors constitutes a very vast and widespread phenomenon.” Over the past few decades, he acknowledged, “this tragic reality has come powerfully to the fore in the Catholic Church and very grave facts have emerged.”

The church has become “progressively aware of the harm suffered by the victims” and of the need to listen to them so as to find ways “to heal the wounds, re-establish justice, prevent crimes” and to develop and consolidate “a new culture of child protection,” he said.

The congress was being held as the Vatican was investigating accusations that one of its foreign diplomats had violated laws relating to child pornography images.

Italian Monsignor Carlo Capella was recalled to the Vatican from his post at the Vatican nunciature in Washington, D.C., after the U.S. State Department notified the Holy See of his possible crimes. Police in Canada also issued a nationwide warrant for the monsignor's arrest on charges of accessing, possessing and distributing child pornography while he was visiting Canada.

“It is a very painful affair, a huge ordeal for everyone who is involved,” the cardinal told reporters in response to requests for his comments on the case involving one of his diplomats. “We are handling the case with the utmost diligence, the utmost seriousness.”

Further information must remain confidential “in order to protect the investigations and, therefore, to safeguard truth and justice,” the cardinal said. In regards to an expected time frame of how the case will proceed, “it’s premature to talk about that.”

Communicating quickly and proactively is critical, a member of the advisory board of the Center for Child Protection at the Pontifical Gregorian University told Catholic News Service.

While some things cannot be divulged while an investigation is underway, “you can tell the public there is an investigation going on and it's being dealt with in an appropriate manner,” said Monsignor Stephen Rossetti, a licensed psychologist and a former Air Force intelligence officer.

“There is a communication issue here” because of very different expectations between the Vatican and the United States and Canada, he said on Oct. 4. “In the U.S., it’s expected before the sun goes down there should be a public statement,” so when there are gaps or a lack of prompt communication, “for us it's frustrating.”

“The Catholic Church should be a leader in child protection rather than a follower,” said the monsignor, who is a clinical associate professor of pastoral studies at The Catholic University of America in Washington.

“It is part of our mandate as a Gospel-based organization. Jesus said very strong things about those who would harm children,” he said, “so why is it the Catholic Church has not been a leader?”

The Rome congress and its gathering of so many top-notch experts is an example of the beginning of this kind of leadership and of the church becoming a platform for the protection of children, “as it should be,” he said.

During his address, Cardinal Parolin said that today “with ever greater evidence, we are becoming increasingly aware that the plague of offenses against the dignity of minors, like many other dramatic problems in the world, is continually passing through and aligning itself with the new dimensions of the digital world, wandering about and inserting itself in its winding paths and in its deep and hidden layers.”

The digital world, he said, “is a dimension of our one-and-only real world and minors who grow up in it are exposed to new risks, or rather to old risks that express themselves in new ways, and the culture of the protection of minors that we want to spread must be up to today’s problems.”

He recalled that Pope Francis continually draws attention to the fact that “the forms of abuse and violence are multiplied and intertwined: the traffic of minors and of human persons generally, the phenomenon of child soldiers, the absence of even the most elementary education, the fact that the smallest children are the first victims of hunger and extreme poverty.”

Cardinal Parolin welcomed this timely congress because while “we recognize the challenges” that the digital age is presenting, “we also realize that we still know very little about how to effectively fight the battle for the protection of minors in our digitalized world.” Indeed, “the phenomena we observe reach levels of shocking gravity,” he said, “their dimensions and the speed with which they spread overwhelms our imagination.”

He applauded the organizers for “realizing dialogue” between representatives of the various fields of scientific research and of the leading businesses in technology and communications characteristic of the digital world, as well as legislators, politicians, law enforcement agencies, religious leaders and those of civil society.

Cardinal Parolin told participants that “from research and understanding of problems there must follow commitment and farseeing and courageous action on the part of all here present, as well as an appeal for the cooperation of every person in a position of responsibility, in various countries, and in the different component of societies.”

He drew their attention to the fact that the population is growing “rapidly” in many countries where economic and social progress is lacking or uneven, and “hundreds of thousands of children and young people grow up...in a digital world that is [experiencing] largely uncontrolled—not to say uncivilized—development. And their parents and teachers might not, perhaps, be culturally equipped to accompany them and help them to grow up in this world” while “their political leaders often do not know where to begin in order to protect them.”

Hans Zollner, S.J., on Oct. 2 highlighted this reality in relation to India where in the next couple of years 500 million more people will go on the internet—50 percent of them under the age of 18.

“We have a responsibility to these children too and the companies that promote and impel the development of the digital world also have responsibilities,” he said. He urged the congress with its international, global and interdisciplinary perspective to “take responsibility for those minors at the world’s peripheries...that are in geographic areas of greater economic poverty, but that are also found within wealthy societies where there is considerable human and spiritual poverty, loneliness, and a loss of the meaning of life.”

He said that “it is not by chance that it is the minors in all of these peripheries who are the preferred target of networks of exploitation and of organized online violence on a global scale.”

Cardinal Parolin said that while the family and the school have the primary responsibility in educating and promoting the dignity of minors and protecting them, in the digital age the responsibility “must be fully shared” by all the social elements represented at the congress.

He said, “The forces that drive the technical and economic development of the world seem unstoppable and, as we know, are perhaps often determined and driven by economic and even very powerful political interests, which we must not allow ourselves to be dominated by.”

The power of sexual desire that “dwells in the depth of the human mind and heart is great and wonderful,” the cardinal said, “when it advances the path of humanity.

“But it can also be corrupted and perverted,” he added, “to become a source of suffering and unspeakable abuse: and so it must be elevated and directed” through the development of “the sense of moral responsibility.”

Baroness Joanna Shields, founder of WePROTECT and the other keynote speaker at “Child Dignity in the Digital World,” agreed in her address. She traced what has happened to children over the past decade and what is happening now worldwide as a result of the internet—“the greatest social experiment in history.” She pointed to the disturbing social changes that have accompanied the internet’s technological developments, which are putting children at ever greater risk, but she said, “The future is not fixed and that’s why we come together in this congress.”

Baroness Shields, who told the congress “this fight has become a life mission for me,” concluded her speech by asking that “years from now, when history writes the chapter entitled ‘the digital world,’ will it celebrate the immense benefits that technology has delivered and the great human progress that followed? Or, will it be a requiem of regret for childhood lost?

“This is not a time to despair,” she said. “We have within our grasp the opportunity to shape the future and we must act. There are times in life when how we act as a global community defines us. This is one of those times.”