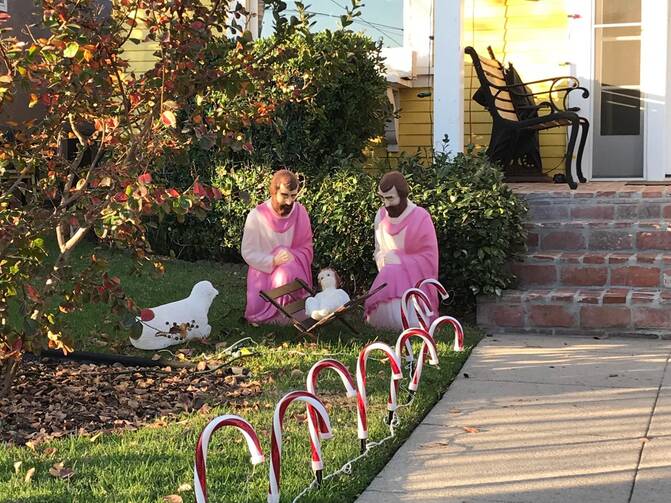 The comedian Cameron Esposito tweeted this photo of a Nativity scene with two Josephs. (@cameronesposito)

Pope Francis unveiled the Vatican’s Nativity display in Rome on Thursday, saying it is meant to serve as a place “where we contemplate Jesus, who, taking on himself the miseries of mankind, invites us to do likewise, through acts of mercy.” The pope also prayed that Nativity displays remind the faithful “to be more attentive to the needs of the poor and of those who, like Jesus, do not find anyone to welcome them.”

But where the Vatican’s manger display is traditional—Joseph and Mary, a cradle for the infant Jesus, some wise men and animals—other Nativity scenes are generating controversy for using overtly political images to make a point.

In Dedham, Mass., parishioners at St. Susanna Church included all the traditional figures but installed above them a plea for peace and a list of places where mass shootings have occurred in the United States, along with the death toll from each attack. They chose the locations—including a school, a church, a police station, a concert—to highlight the fact that mass shootings have become routine in all facets of U.S. life.

The pastor of the church, the Rev. Stephen Josoma, told America that the idea for the nativity came from a meeting of the parish’s local chapter of Pax Christi, an international peace movement. He described mass shootings as the “new normal” and said that parishioners were frustrated that, following each attack, politicians claim it is “never the right time to talk about it.”

So, they decided to paraphrase on a sign above the Nativity a verse from Luke’s Gospel—“If this day you only knew what makes for peace”—to challenge individuals to consider how they can go about ushering in peace.

Father Josoma said the display has started a conversation, at the parish and even across the country because of news reports. He said the Nativity story includes an element of strangers trusting one another, which he believes is essential for society to move forward on stopping gun violence.

St. Susanna Church included all the traditional Nativity figures but also a list of places where mass shootings have occurred in the United States.

“If we trust each other more, we can formulate a much better response than we have in the past,” he said.

In Italy, where tens of thousands of migrants continue to arrive each month, the Nativity display in the town of Castenaso includes Mary and baby Jesus, but rather than taking shelter in a shed, they sit on a raft, which the town’s mayor said is meant to symbolize the plight of migrants trying to reach Europe’s shores.

While Pope Francis has made highlighting the global refugee crisis a hallmark of his papacy, a retired auxiliary bishop of Bologna told a local newspaper that he thinks the display is inappropriate.

Mary and baby Jesus sit on a raft, meant to symbolize the plight of migrants trying to reach Europe’s shores.

“The central nucleus of a Nativity scene calls for a child in swaddling clothes to be placed in a manger, and this must be respected,” Bishop Ernesto Vecchi said, according to The Local. “I’m not saying a crib cannot be enriched by other elements, and certainly, a boat is a symbol that reminds us of the need for hospitality, but don’t forget that Jesus is the savior of all problems, not just one.”

But the mayor may have some support from church higher-ups: Last year, the Vatican’s Nativity display included figures from a Maltese fishing village as well as a small dinghy, which the Vatican said at the time represented “fish and life but also, unfortunately the realities of migrants who in these same waters cross the sea on makeshift boats to Italy.”

A Nativity scene with two Josephs

With L.G.B.T. issues continuing to dominate the headlines, a Nativity scene in front of a California home that swapped out Mary for a second Joseph raised the ire of one bishop.

Comedian Cameron Esposito posted a photo of the display to Twitter, which generated more than 23,000 likes. But in a Facebook post, Bishop Thomas Tobin of Providence called it “sacrilege” and an “attack on the Christian Faith.”

“How sad that someone believes it’s okay (or funny or cool) to impose their own agenda on the holy Birth of Jesus,” he wrote.

Ms. Esposito responded to Bishop Tobin on Twitter, writing, “The gay agenda is for all ppl to be safe, seen & loved. Perhaps that’s an agenda the Church should borrow.”

Felicity Harley-McGowan, a lecturer of early and medieval Christian art at Yale Divinity School, said some scholars see the first Nativity display, created by St. Francis with live actors and animals in the early 13th century, as an attempt to “bring home more powerfully the extreme poverty into which this child was born and what God was trying to do.”

“How sad that someone believes it’s okay (or funny or cool) to impose their own agenda on the holy Birth of Jesus.”

During the Renaissance, religious imagery included images of contemporary people, sometimes for purposes of “political propaganda,” she told America. Around this time, she continued, live depictions of Jesus’ life become more popular, including living nativity scenes. This allowed “ordinary people to have more control over how the story was told,” perhaps giving them a vehicle “to articulate contemporary concerns,” she said.

And while overt political messages embedded in Nativity scenes may be relatively recent, they are not altogether novel.

In 2014, Portland, Ore.-based illustrator Everett Patterson published “José y Maria,” which he wrote was aimed at “depicting Jesus’s parents in a modern setting.”

The scene shows a young couple, the woman pregnant, standing outside a convenience store in the rain. The traditional “no room at the inn” story is represented by a seedy-looking motel, which indicates it has “No Vacancy” in red neon lights.

Mr. Patterson wrote that the scene was meant to remind Christians that “our Savior’s parents (and indeed, Jesus himself) were at one time similarly troubled” whenever they see other “‘down and out’ people huddling outside of gas stations.”

For several years, visitors to Bethlehem, the historical location of Jesus’ birth, have been able to purchase Nativity scenes that contain a section of the border wall that separates Israel and Palestine, as well as an Israeli guard tower. According to The Guardian, the Nativity wall blocks the three wise men from being able to reach Jesus and his family.

Bethlehem vendors have Nativity scenes in which a wall blocks the three wise men from being able to reach Jesus and his family.

And in the Catalonia region of Spain, a small figure called a caganer, or defecator, squats in the corners of many Nativity scenes. The origins of the tradition are murky but they may go back to agricultural times, according to the BBC.

In more recent years, politicians, athletes and celebrities have been depicted as caganers, which some people have said is an attempt to humble the mighty. Pope Francis has been depicted as a caganer as have many other global leaders, including President Donald Trump, North Korean leader Kim Jong-un and Russian president Vladimir Putin. (Figurines of all of these are available for about $20 each on caganer.com.)

According to Joan Lliteras, whom the BBC described as a “caganer connoisseur,” there are certain rules of etiquette when it comes to where the figurines are displayed.

“The caganer is never in the front of the Nativity scene. That would be a lack of respect. He's always hidden in a corner, under a bridge or behind a tree, and every morning the children play a game, hunting for the caganer," he said.

Ms. Harley-McGowan said that like the crucifixion scene, the Nativity image remains a moving visual even in increasingly secular societies.

“This is a recognizable, powerful image,” she said, “one that can therefore be utilized to say something very profound about contemporary issues.”

And as for whether it’s inappropriate for nativities to get political, Father Josoma rejects that claim.

“There’s nothing more political than the Gospel,” he said. “Jesus wasn’t crucified for praying the rosary inside a church on Sunday.”

Michael O’Loughlin is the national correspondent for America and author of The Tweetable Pope: A Spiritual Revolution in 140 Characters. He is based in Chicago.

If you want yours to make a political point, yes.

America, amongst Catholic publications, asks this question because it is a political publication not a religious one. If you want to divide, yes. The answer for bringing people together is obviously

St Francis the divider? Not likely.

Josoma's last statement appears to mock those who pray differently than he prays ; that is, if he is, as a friend says, "a good and holy priest". One of the problems we currently face are in the pseudo religious such as Mr. Josoma who are much more interested in politics and the righteousness of their own views than anything which is Christ based. These individuals love to use their collar to push their own personal agenda for which Christ is an oh-so-convenient conduit. Personally, I pay as much attention to these individuals as I would someone shouting through a megaphone while standing on a corner with a box for donations of change in front of them.