We have reached “the limit” with nuclear arms, says Pope Francis, and must “go back” 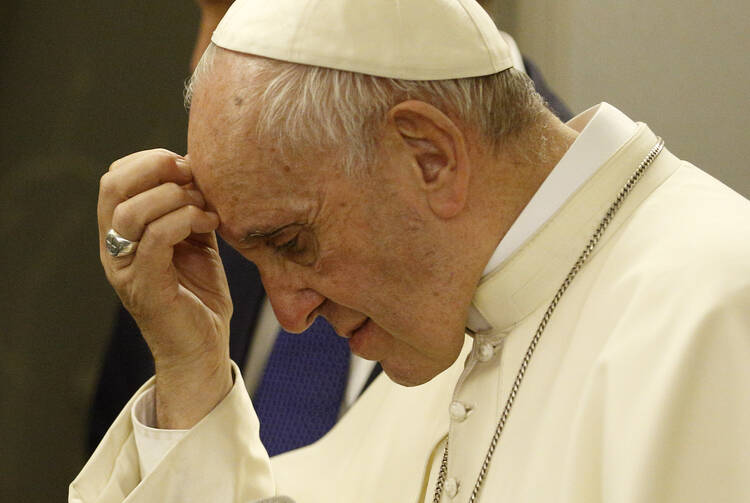 Pope Francis pauses as he answers questions from journalists aboard his flight from Dhaka, Bangladesh, to Rome Dec. 2. (CNS photo/Paul Haring)

The world is experiencing “irrationality” with respect to nuclear arms, Pope Francis said during during a press conference on the flight from Dacca to Rome on Saturday. “We have reached the limit,” he said, adding, “Today, in order to save creation, to save humanity, is it not necessary to go back?”

The pope was echoing comments he made on Nov. 10, when, addressing an international conference in the Vatican on nuclear arms he condemned the possession of nuclear arms. That address was seen as a contrast to the comments of Pope John Paul II in 1982, when had accepted the deterrence value of nuclear weapons.

Pope Francis was asked yesterday what has caused such a change in the church’s teaching.

“Irrationality is what has changed,” he responded. He referred reporters to his comments on weaponry in his encyclical “Laudato Si’” and said, “in the nuclear sphere, in the 34 years since [Pope John Paul II’s comments], we have moved ahead. Today we are at the limit.” He added that while “this [statement] could be argued, it is my opinion. My firm opinion.”

The pope continued, “We are at the limit of what is legitimate when it comes to having and using nuclear arms. Why? Because today with such sophisticated nuclear arsenals, we risk the destruction of humanity, or at least a big part of it.”

“Today with such sophisticated nuclear arsenals, we risk the destruction of humanity, or at least a big part of it.”

Speaking of nuclear weapons, he said they are “sophisticated, and also cruel. They are capable of destroying persons without touching the structures. We are at the limit.”

“Because we are at the limit”, he said, “I ask myself this question, not as pontifical magisterium, but as a question a pope asks himself: ‘Is it licit to maintain nuclear arsenals as they are today?”” He then gave his answer: “In order to save creation, to save humanity, is it not necessary to go back?”

“Think of Hiroshima and Nagasaki, 70 years ago. The destruction!” Francis said. He emphasized that “this happens also with atomic energy, where we do not have full control: “Think of the accidents in the Ukraine,” he said, in a reference to the Chernobyl disaster.

“I say we are at the limit of what is licit,” the pope concluded.

“I say we are at the limit of what is licit,” the pope concluded.

Pope John Paul II had reluctantly accepted nuclear weapons as a deterrent, but that acceptance was conditioned on the sincere intention to work for their elimination. But since then, the nuclear powers have continued to develop them in ever more threatening ways, and at ever greater financial cost. For these and other reasons, including the risk of accidents, Francis has blown a whistle on the nuclear arms race by condemning their very possession.

As Francis spoke about nuclear arms, our plane happened to be flying over India, one of the states that now has nuclear weapons, and which he hopes to visit next year. The other states that have nuclear arms are: Russia, China, France, Israel, Pakistan, the United States, North Korea, and the United Kingdom.

Weapons are toys in the hands of the weak and the tiny.

creation and destruction have gone out of control,which is painful for humanity john kedari