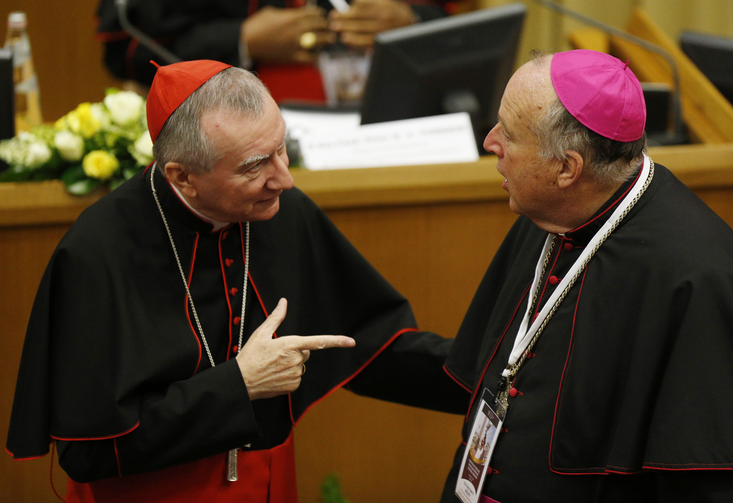 Visiting the United States from Rome, Pope Francis’ secretary of state urged U.S. bishops to remember their fight for refugees during the First World War and to seek an end to the polarization and divisiveness that permeates all aspects of society.

Preaching at a Mass marking the 100th anniversary of the U.S. Conference of Catholic Bishops, Cardinal Pietro Parolin noted that the organization was founded originally as the National Catholic War Council during the First World War, in part to help resettle displaced people.

“In the very changed circumstances of today that mission remains timely, as the church in your country seeks to bring not only material assistance, but also the spiritual balm of healing, comfort and hope to new waves of migrants and refugees who come knocking on America’s door,” he said.

The cardinal’s visit comes at a time when internal divisions among U.S. Catholics have become public after a theological adviser to the U.S. bishops conference released a scathing letter he sent to the pope. When that adviser, Thomas Weinandy, O.F.M., Cap., resigned on Nov. 1, Cardinal Daniel DiNardo, president of the organization, took the unusual step of professing publicly that the U.S.C.C.B. “always stand in strong unity with and loyalty to the Holy Father, Pope Francis.”

“The Catholic community is called under your guidance to work for an ever more just and inclusive society by dispelling the shadows of polarization, divisiveness and societal breakdown by the pure light of the Gospel,” he said.

The cardinal had words of praise for the bishops’ “defense ofmoral values and the rights of the poor.”

When it came to how bishops conduct themselves in the public square, the cardinal had words of praise for the bishops’ “defense ofmoral values and the rights of the poor, the elderly, the vulnerable and those who have no voice.”

He also highlighted their work in the pro-life arena, and he lauded their recent efforts to protect access to healthcare for families, a nod to the bishops’ opposition to recent G.O.P. efforts to dismantle the Affordable Care Act.

“I think of particular of the outstanding witness that the church in this country has made to defending the right to life of the unborn but also in more recent times to its effort to ensure due protection for the family and access to affordable healthcare,” he said.

Cardinal Parolin was appointed as the Vatican’s Secretary of States by Pope Francis in 2013, just a few months after Francis assumed the papacy. During the cardinal’s first few months as secretary of state,his Vatican stock rose, with appointments to the pope’s council of cardinal advisers and to the powerful congregation for bishops, which helps Francis select new leaders for dioceses around the world. He has embarked on a number of high-profile missions, includingmeetings in August with Russian President Vladimir Putin and Russian Orthodox Patriarch Kirill, as well as some Russian Catholics.

Preaching without wearing a miter, the ceremonial headdress worn by Catholic bishops to signify rank, Cardinal Parolin urged bishops to resist “all of those things in our lives that stand in the way of our growth in Christ: our ego, our spiritual worldliness, our daily temptation and our desire for human respect,” saying they “must be crushed by the daily experience of prayer, humility, self denial and pastoral charity.”

Cardinal Parolin urged bishops to resist “all of those things in our lives that stand in the way of our growth in Christ.

Looking to the future, he urged bishops “to discern ever more creative ways to anoint all God’s people with the oil of wisdom and strength” so that they can “embrace their prophetic mission as witnesses of evangelical joy and hope in a broken world.”

During their meetings this week, the full assembly of U.S. bishops will hear Cardinal DiNardo’s first address as president of the conference, receive updates on working groups related to immigration and racism and elect new leaders for various subcommittees.

While much of the business is routine, one chairman race has drawn national attention. Bishops will elect a new head for their pro-life committee, with Cardinal Blase Cupich said to represent a wing of the church that believes pro-life activities must extend beyond abortion and euthanasia, and Archbishop Joseph Naumann viewed as a continuation of the bishops’ recent pro-life activities.

Cardinal Parolin was on hand to celebrate the 100th anniversary of the U.S. Conference of Catholic Bishops.

Cardinal Parolin was on hand to celebrate the 100th anniversary of the U.S. Conference of Catholic Bishops, which was founded to mobilize Catholic assistance as the United States entered the First World War.

According toCatholic News Service, the first iteration of the bishops conference was dubbed the National Catholic War Council, which recruited military chaplains, provided recreation for soldiers and assisted refugees.

When World War I ended, Cardinal James Gibbons of Baltimore petitioned the Vatican to recognize a permanent organization. Pope Benedict XV agreed and the bishops created the National Catholic Welfare Conference, which advocated for social justice issues such as a minimum wage, government-sponsored health insurance and equal pay for equal work.

U.S. bishops may discuss GOP tax plan, guns & what it means to be ‘pro-life’ at annual meeting
Michael J. O’Loughlin

An open letter to Father Weinandy, from his predecessor, on ‘Amoris Laetitia’ and Pope Francis
John J. Strynkowski

Pointing to the history of the U.S. bishops in the early 20th-century, when U.S. Catholics were encouraged by church leaders to support the war effort, two demonstrators affiliated with the Catholic Worker Movement gathered outside the Basilica of the National Shrine of the Assumption of the Blessed Virgin Mary in downtown Baltimore to question the bishops commitment to the anti-war movement today. Placing placards with quotes from peace activist Daniel Berrigan, S.J. and Benjamin Salmon, a Catholic conscientious objector to World War I who clashed with civil and church authorities for his anti-war stance, they said bishops today must condemn war in all forms.

The current structure of the bishops conference, which includes doctrinal oversight as well as social justice organizations such as Catholic Relief Services and the Catholic Campaign for Human Development, was set in 2001.

Michael O'Loughlin is the national correspondent for America.

★ ★ i am currently simply creating $15k to $18k each month and also the actual quantity of my last month cheque was $16598 from this job. i'm doing this job in my half time, affirmative solely in my half time. i need you all to hitch this job currently and begin creating real money on-line at once by follow directions on this journal.....

Why are you permitting the publishing of letters advancing scams?

It is an ego engaged in spiritual adultery that denies that God, The Most Holy And Undivided Blessed Trinity, Is The Author of Love, of Life, and of Marriage. There is no polarization in The Sense of The Faithful; it is Through Him, With Him, and In Him, in The Unity of The Holy Ghost, that Holy Mother Church exists.