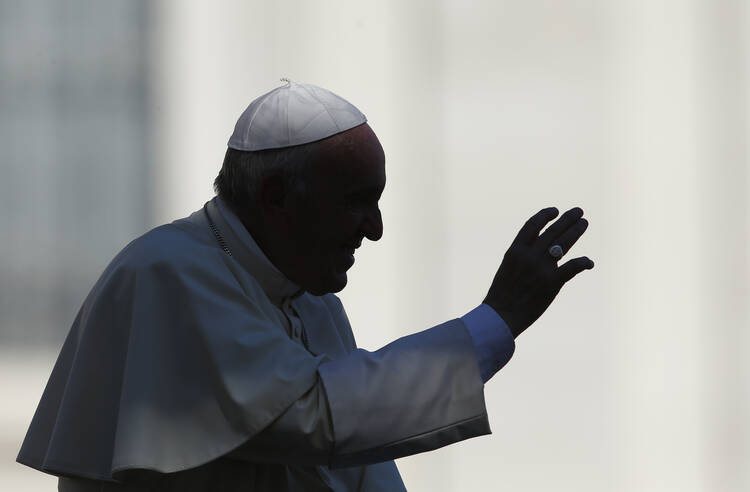 A consultant to the U.S. bishops’ Committee on Doctrine has stepped down following the publication of a serious criticism of Pope Francis in a number of Catholic media outlets on Nov. 1. In a letter addressed to Francis, Thomas Weinandy, O.F.M., Cap., complained that “a chronic confusion seems to mark your pontificate.”

He added that at times “your manner” appears “to demean the importance of Church doctrine” and that “faithful Catholics can only be disconcerted by your choice of some bishops.” Father Weinandy described those choices as “men who seem not merely open to those who hold views counter to Christian belief but who support and even defend them.”

“What scandalizes believers,” he wrote, “is not only your having appointed such men to be shepherds of the Church, but that you also seem silent in the face of their teaching and pastoral practice.” Father Weinandy’s sharp comments focused on the continuing controversy over the practical import of “Amoris Laetitia,” the apostolic exhortation issued by Pope Francis in 2016.

The U.S. Conference of Catholic Bishops responded quickly after the letter became public. A brief statement announcing Father Weinandy’s resignation noted that “the work of the Committee is done in support of, and in affective collegiality with, the Holy Father and the Church in the United States.” It was followed soon after by another “on the nature of dialogue within the Church today.”

The statement, signed by Cardinal Daniel N. DiNardo of Galveston-Houston, president of the U.S. Conference of Catholic Bishops, took Father Weinandy’s letter as “an opportunity to reflect on the nature of dialogue within the Church.” Cardinal DiNardo urged that in discussion of church teaching that Christian charity “be exercised by all involved” even as legitimate differences are acknowledged.

“Throughout the history of the Church, ministers, theologians and the laity all have debated and have held personal opinions on a variety of theological and pastoral issues,” Cardinal DiNardo wrote. “In more recent times, these debates have made their way into the popular press”—something he described as “expected” and “often good.”

But some of these reports, he added, “are often expressed in terms of opposition, as political—conservative vs. liberal, left vs. right, pre-Vatican II vs Vatican II. These distinctions are not always very helpful.”

He urged that in “honest and humble discussions around theological and pastoral issues…. We must always keep in mind St. Ignatius of Loyola's ‘presupposition’ to his Spiritual Exercises: ‘…that it should be presumed that every good Christian ought to be more eager to put a good interpretation on a neighbor's statement than to condemn it.’”

He added, “This presupposition should be afforded all the more to the teaching of Our Holy Father.” The cardinal described the U.S. bishops’ conference as “a collegial body of bishops working towards that goal.”

“As Pastors and Teachers of the Faith, therefore, let me assert that we always stand in strong unity with and loyalty to the Holy Father, Pope Francis,” he wrote, “who ‘is the perpetual and visible source and foundation of the unity both of the bishops and of the whole company of the faithful’ (LG, no. 23).”

Father Weinandy is the former executive director of the bishops' Secretariat for Doctrine. During his tenure, the committee issued rebukes of five prominent U.S. theologians, including Elizabeth Johnson, C.S.J., a theologian at Fordham University; and Peter Phan, a theologian at Georgetown University.

Well so much for dialogue.

Could we have some background information for Father Weinandy’s
concerns ?

Surely American magazine and the U.S. Committee on Doctrine do not
believe that whatever the Pope says, be it an off-handed comment or
a Papal Memo - must be held and believed by all Catholics for all times
and no inquiring questioning is allowed.

Would it be the case, if Fr. Weinandy were the darling of the Progressive
Wing of the Catholic Church, that America Magazine would be
up in arms over this dismissal - were the Pope - John Paul II ?

Funny how the Trads were ultramontane under John Paul and Benedict and now verging on sedevacantist under Francis. The fact is that a PUBLIC rebuke of a Supreme Pontiff is NOT "dialogue." Instead, it's more like Luther's 95 theses. Is schism what you trads actually want? If that's what you do want, then I suggest you're going to be very much alone, because most people in the world like this pope. As a matter of fact, though I agree that there are large portions of the American and European John Paul-appointed clergy who don't, I also feel that the "remnant" elements of Christianity that Rod Dreher is always talking about in his "Benedict Option" are far more likely to behave in an "ecumenical spirit" as a result of his papacy, than they were under John Paul and Benedict. We may get a smaller universal Church, but one in which theological disputes are minimized, and in which the mainline Protestant Churches feel much greater solidarity with Rome.

So Francis is very popular. I wonder if this is the populist issue which he is always warning us about. ;)) Love the way Francis plays both sides of an issue so he can win. Be involved in politics but... only if Francis agrees with it. Sure seems like he is the overhead advertisement at a fast food restaurant, looks really good until you start to digest it. And fast food is quite popular. Sigh!

Father Tom sent his concerns in a letter at the end of July. He received a reply from the Vatican indicating this letter was on The desk of Pope Francis mid October. Why then release the letter to the public? Did Father Tom feel rebuffed? Did he expect a hand written note from the Holy Father himself?

Was Fr. Weinandy dismissed? Or did he resign?

He came to write the letter after a period discernment and a clear sign in answer to a prayer:

It came last May, he said, when he was in Rome for a meeting of the International Theological Commission. He said he spent two different sessions in prayer at St. Peter’s Eucharistic Chapel, struggling to decide if he should speak up. In the middle of a sleepless night, he said, he basically gave God an ultimatum.

“If you want me to write something, you have to give me a clear sign,” Weinandy recalls saying. “Tomorrow morning, I’m going to Saint Mary Major’s to pray, and then I am going to Saint John Lateran. After that, I’m coming back to Saint Peter’s to have lunch with a seminary friend of mine.”

“During that interval, I must meet someone that I know but have not seen in a very long time, and would never expect to see in Rome at this time. That person cannot be from the United States, Canada or Great Britain. Moreover, that person has to say to me, ‘Keep up the good writing’.”

Sure enough, Weinandy said, exactly that happened the next day, in a chance meeting with an archbishop he’d known a long time ago but not seen for over twenty years, who congratulated him for a book on the Incarnation and then said the right words, “Keep up the good writing.”

“There was no longer any doubt in my mind that Jesus wanted me to write something,” Weinandy said. “I also think it significant that it was an Archbishop that Jesus used. I considered it an apostolic mandate.”

Weinandy is aware that might sound a little pretentious, but says it’s important to illustrate his motives.

"gave god an ultimatum"? It does indeed sound pretentious. I've done this myself, and it always backfires on me. Whenever I set up "conditions" and "if this happens, then it means that", I'm deep into my own way.

“a chronic confusion seems to mark your pontificate.”
"your manner" appears "to demean the importance of Church doctrine."
"faithful Catholics can only be disconcerted by your choice of some bishops."
Upon reading these excerpts from Thomas Weinandy's letter to Pope Francis, I immediately thought about how such comments could have been applied to Jesus and His ministry by the Pharisees and Sadducees.
His teaching and actions were "confusing" the people and "demeaning" the teachings of the Torah. His choice of apostles were highly suspect, when compared to the members of the Jewish priestly class and teachers of the law. Yes, history does repeat itself.

This article as a new report of the facts does its job. I’d like to see more analysis and deeper investigation. Was the charge insubordination, or was it incivility? Was it poor judgment in allowing the letter to go public? Was he known to have leaked the letter? If not he, then who? Did Pope Francis direct the Bishops to remove Fr. Weinandy?

There’s a disjoint between Bishop DiNardo’s call for civil open dialogue and the decision to remove Fr. Weinandy. Civility does not mean evading the conviction of your position. Did Fr. Weinandy go too far? Did he disrespect the Pontificate while stating his case against the Pontiff? The excerpts suggest his attitude was insubordinate and insulting. But honest dialogue sometimes moves that direction, and some tolerance may be appropriate in name of “open dialogue.” The danger is that opposing views are silenced, and dissent may go underground because of this firing. The Pope’s enemies will see this firing as retributive.

I as many love Pope Francis, and I pray for his strength to move this mountain by faith. Any change agent will be a magnet for attack, especially within a world-wide monolithic tradition based organization. As I review the social comments of his detractors, the more reasonable state they feel he has not heard their objections, or chooses to ignore them. He must somehow find a way as Jesus did to both confront and love in responding to those attacks.