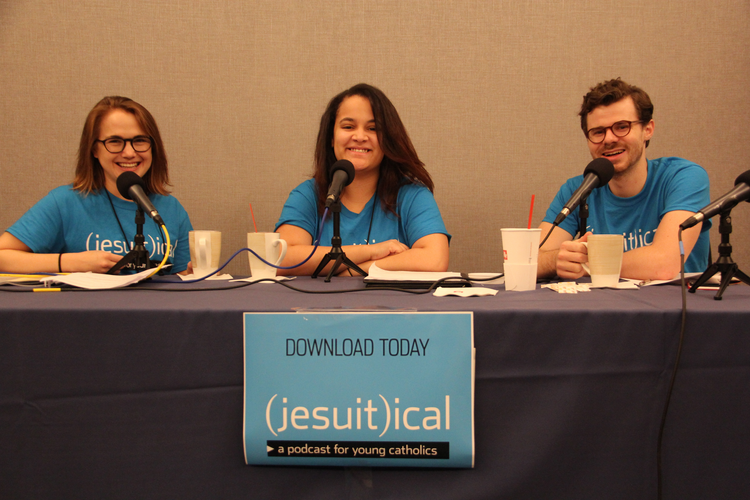 Last weekend Jesuitical took the show on the road for our first live recording at the Ignatian Family Teach-In for Justice in my hometown, Arlington, Va. The Teach-In is the country’s largest Catholic social justice gathering, which brings together students from Jesuit high schools and colleges and other members of the Ignatian family for three days of learning, prayer and advocacy.

For this week’s interview, the tables were turned and your hosts were in the hot seat. Our audience had some extremely thoughtful questions for us: How has our faith changed since graduating from college? How do you convince teens who say they like God but not religion that the church has something to offer them? And, of course, if we could canonize one person, living or dead, Catholic or not, who would it be?

And in Signs of the Times, Pope Francis makes an extra-long distance call to the International Space Station. Next, the “chainsaw nun” now has an IPA named in her honor—maybe they’ll serve it at the University of Nebraska’s new Catholic sorority house? And it’s been one year since Donald J. Trump was elected president of the United States, and from Sean Spicer’s fact-challenged press conferences to Anthony Scaramucci’s, ahem, colorful language, Trump’s Catholics have been keeping things interesting over the past 365 days.

Speaking of Trump: What does it mean to be an ally to people of color under an administration that has struggled to condemn rising white nationalist sentiment? And finally, we discuss the church’s effort to keep young people in the Catholic fold.

Special thanks to everyone who came out to the live show. If you want to bring Jesuitical to your school or group, let us know! And as always, we want to hear from you. Follow us Twitter @jesuiticalshow or send us an email at jesuitical@americamedia.org. And please leave us a rating and review on iTunes. This week we peaked at #19 on iTunes’s Religion and Spirituality podcast charts. Only you can help us top Joel Osteen!

Hello listeners! Thanks for making us one of iTunes' top 20 Religion & Spirituality podcasts! pic.twitter.com/UGuk89VwQX

Pope Francis to call astronauts on the International Space Station
‘Nun With a Chainsaw’ isn’t a horror flick. It’s a beer inspired by a Miami nun
Catholic sorority awaits house’s construction on Greek Row
Sean Spicer finally gets to meet Pope Francis
Hundreds of BC students walk out of class to rally against racism
Can the Catholic Church keep millennials from passing it by?

Getting paid easily online every month by just doing easy work from home. I have just received a paycheck of $18572 from this job. I am a full time college student and just working on it for 2 to 3 hrs a day. This job is super awesome and its earnings are massive. Every person on this plannet can makes more income by follow this link.......
www.jobstoday60.com