Pope John Paul I, “the smiling pope,” is on the path to sainthood. 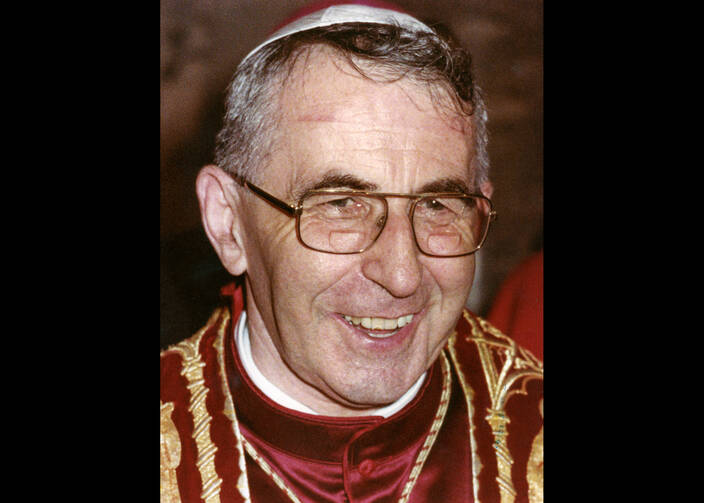 Pope John Paul I, known as the "smiling pope," is pictured in a 1978 photo. Cardinal Albino Luciani was elected pope Aug. 26, 1978, and was found dead 33 days later. He served one of the shortest papacies. (CNS file photo)

“The smiling pope,” John Paul I, who served as leader of the Catholic Church for only 33 days in 1978, is on the path to sainthood. Next Tuesday, Nov. 7, the cardinals and bishops of the Congregation for the Causes of Saints will meet in the Vatican, and sources say they are expected to recognize that he lived the Christian virtues to “a heroic degree.” Pope Francis is expected to approve this and declare him “Venerable Servant of God.”

Two miracles attributed to the intercession of the man Italians called “the smiling pope” are under examination. If one of them is recognized as a miracle, then he could soon be beatified.

The news was broken today in La Stampa and Vatican Insider by Andrea Tornielli, an Italian Vatican correspondent, in his presentation of a new book on the death of John Paul I, Papa Luciani: Chronicle of a Death. The book is written by Stefania Falasca, the vice-postulator of the cause of John Paul I, who died on the night of Sept. 28, 1978. His was one of the shortest pontificates in the history of the church.

‘The Smile of God’: A Letter to Albino Luciani, Pope John Paul I
Joseph McAuley

Many questions were raised at the time of his sudden death and in the following years as to the cause of his death. David Yallop wrote the bestselling book In God’s Name, based on his investigation into the cause of the pope’s death, in which he alleged the pope was murdered. The British author John Cornwell strongly rebutted that thesis more than a year later, in his bestseller A Thief in the Night.

Now, Stefania Falasca removes the mystery surrounding his death and debunks the conspiracy theories and insinuations of murder or foul play in the Vatican that have survived even to this day on the Roman streets. As vice-postulator of the cause of John Paul I, she had access to the secret documentation in the Vatican about his death and spoke to key witnesses who have remained silent up to this point, including Sister Margherita Marin, the young nun who found him dead in his bedroom on the morning of Sept. 29, 1978. Ms. Falasca provides previously undisclosed information, including medical reports, and the testimonies from the witnesses in her book that is the result of serious research and will appear in bookshops in Italy on Nov. 7.

Ms. Falasca, who writes for Avvenire—the daily paper of the Italian Catholic Bishops’ Conference—documents the fact that John Paul I suffered a severe pain in his chest, a symptom of a heart problem, for about five minutes at 7:30 p.m. on the evening prior to his death, while he was sitting and reciting vespers with his Irish secretary, Msgr. John Magee, before having dinner. The pope flatly rejected the suggestion that a doctor be called, and the pain ceased without the administration of any therapy or medicine. His doctor, Renato Buzzonetti, was only informed about the heart pains after the pontiff had died.

The book confirms that contrary to what the Vatican first announced, it was the young nun—not the pope’s secretaries—who discovered that the pope was dead. It reports that this happened when an elderly nun, Sister Vicenza, discovered that he had not taken the cup of coffee that she had left outside his bedroom door at 5:15 a.m. on the morning of Sept. 29.

Sister Vicenza, who has a heart condition, too, then decided to knock on his bedroom door and when he did not respond, she entered the room but immediately came out in a state of shock and called Sister Margherita, who entered the room. Sister Margherita relates in her sworn testimony, “I touched his hands, they were cold, and I saw, and was struck by the fact that his nails were a little dark.”

Cardinal Pietro Parolin, the secretary of state, has written the preface to this new book, which documents the fact that in 1975, when he was patriarch of Venice, Cardinal Luciani suffered a heart problem that was treated with anti-coagulants and appeared to have been resolved.

The book also reveals that before the conclave that elected John Paul II, the cardinals sent a series of written questions to the doctors who had been involved in embalming his corpse to check if there were any signs of traumatic injuries of any kind on his body, and if it was ascertained that he had died suddenly and in a natural way. They clearly had some serious questions on their minds regarding his death, but the medical reports set their minds at rest.

‘The Smile of God’: A Letter to Albino Luciani, Pope John Paul I
Joseph McAuley

Many people in Italy already consider “the smiling pope” a saint. Soon after his death, the dean of the College of Cardinals, Joseph Ratzinger, who voted in the conclave that elected him pope, said, “I am convinced that he is a saint.”

It appears clear now that he is on the path to sainthood, and if the Congregations for the Causes of the Saints recognize one of the two unexplained cures being attributed to his intercession, then the door will be open for Pope Francis to confirm this and beatify him.

Pope John Paul I was dearly loved by my abuela, who transmitted the faith to me with her own always welcoming smile!

33 days as the most evil, vindictive bishop of rome in pontifical history