On Reformation anniversary, Lutherans bridge divides with other faiths 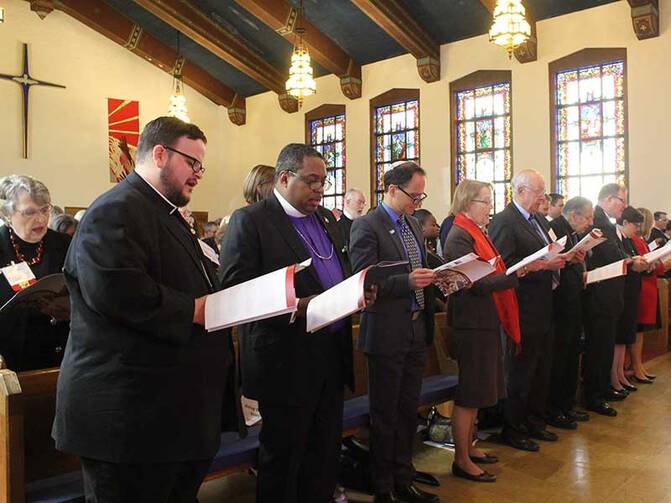 WASHINGTON (RNS) — Five centuries to the day when German monk Martin Luther is said to have nailed 95 theses to a church door in Germany, leaders of the largest Lutheran denomination in the U.S. gathered to celebrate how they’ve bridged divides with Catholics and other faiths.

“It is good to be here on this day, the day when they said that Martin Luther posted the 95 theses,” said Presiding Bishop Elizabeth Eaton of the Evangelical Lutheran Church in America at a daylong program Tuesday (Oct. 31) at the Lutheran Church of the Reformation on Capitol Hill.

Though the program was jovial and festive — starting with an impromptu singing of “Jesus Loves Me”— it turned serious as it recalled divides with Catholics and later with Jews, Muslims and others.

What would Martin Luther say about today’s migrant and refugee crises?
Leopoldo A. Sánchez M.

Eaton and Catholic Bishop Denis J. Madden, co-chair of the U.S. Lutheran-Catholic Dialogue, sat before some 300 people and spoke of the hopes for deeper relationships between their churches centuries after religious wars killed their ancestors.

Calling each other by their first names after years of working together, the two bishops acknowledged remaining differences over women’s ordination and Rome’s authority. But they described worship services and documents that have brought the faiths together even as their work remains unfinished — Catholics and Lutherans do not share the Eucharist, or Communion.

The “Looking Back and Called Forward” event was one of numerous ways Christians across the globe have marked the milestone – from pilgrimages retracing Luther’s steps in Germany to conferences, scholarly talks and hymn festivals featuring Luther’s “A Mighty Fortress Is Our God.”

“We recognize that while the past cannot be changed, its influence upon us today can be transformed to become a stimulus for growing communion, and a sign of hope for the world to overcome division and fragmentation,” the statement reads.

Madden, who is auxiliary bishop emeritus of the Archdiocese of Baltimore, noted that Eaton presented him with a porcelain chalice that he keeps on his desk as a sign of their possible future sharing of the Eucharist.

“I think in worshipping together and singing together, praying together – this shows that we are together,” Madden said. “We don’t have that full communion yet but we definitely are on the way.”

“We don’t have that full communion yet but we definitely are on the way.”

Over the course of the program, participants stood and joined in a litany of confession that repudiated “Luther’s anti-Judaic diatribes.”

After a pause, he noted the severity of Luther’s words — suggesting the burning of synagogues and the dismembering of rabbis — but turned to the ways Jews and Lutherans have come to share values about inclusion, pluralism and a determination to meet pressing needs, such as helping refugees and children of immigrants who fear deportation.

“Together Lutherans and Jews will fight to protect and defend them,” he said to applause.

Posner was followed by others who called Lutherans to do more to fight against anti-Muslim prejudice and racial division.

“We all need to act,” said Dr. Ayaz Virji of Dawson, Minn., a Muslim who has gone on a recent educational tour with the Rev. Amanda France, a Lutheran pastor in Bird Island, Minn., to foster understanding about Muslims. “We can’t just pray this away, although prayer is critical; we have to do what we have to do in our communities to make a difference.”

Bishop W. Darin Moore of the African Methodist Episcopal Zion Church urged Lutherans to get to know people who don’t look like them to address gaps in education, economic development and criminal justice.

“Imagine how impactful it would be if more of our members would make the drive across town to build meaningful relationships with one another with the same zeal as we make our mission trips around the world to build new churches,” said Moore.

Most Catholics and Protestants now agree they have more in common than not.

Though differences remain, the Pew Research Center recently found that most Catholics and Protestants now agree they have more in common than not. In fact, more Protestants reported they believe salvation comes through a mix of faith and good works (52 percent) — the position traditionally held by Catholics — than through “faith alone” (46 percent). That belief — “sola fide” in Latin — is one of the backbones of Protestant Reformers’ beliefs.

The program also featured a Q&A discussion with Eaton and PBS host Rick Steves, who created a special timed to the Reformation anniversary. The daylong event concluded with a Communion service, during which Madden received a blessing.

At a break in the program, the Rev. Alfred Baca, executive director of the U.S. Catholic bishops’ office on ecumenical and interreligious affairs, said he thought it was wise for the Lutherans to take a broad approach to bridging divides.

“From the experience of the Catholic-Lutheran relationship, of where I’ll say the impossible can become possible … there’s hope in every other community, every other situation that sometimes seems very dark,” said Baca, who attended with several other USCCB staffers. “I took a lot of hope from this.”