What would Martin Luther say about today’s migrant and refugee crises? 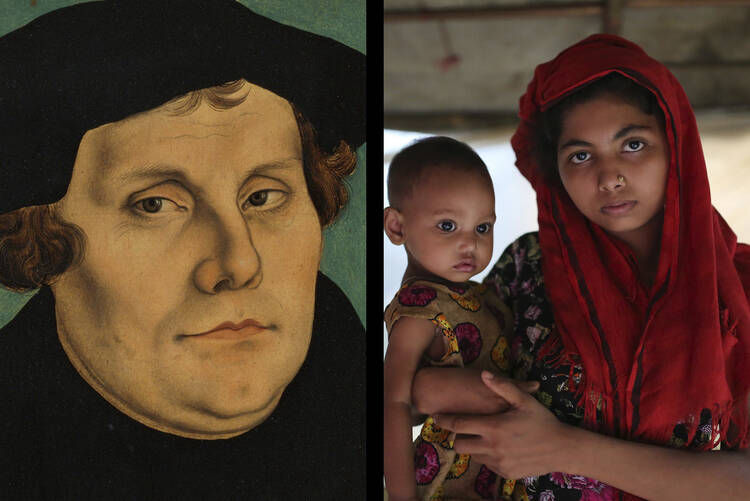 A Rohingya woman holds her child and stands for a photograph at a makeshift camp near Kutupalong refugee camp in Cox's Bazar, Bangladesh, Tuesday, Oct. 3, 2017. (AP Photo/Zakir Hossain Chowdhury)

According to the United Nations, more than 65 million people (23 million of them refugees) are counted as forcibly displaced due to persecution, war and violence. That is about as many people as the population of New York state, Texas and Florida. More than half are children under the age of 18. Only 1 percent get resettled each year. The numbers are staggering. For years, the United States has been a world leader in refugee resettlement. Yet to the dismay of refugee resettlement agencies and many citizens, President Trump recently lowered the cap on refugee admissions to 45,000—the lowest in decades—and we keep hearing of indefinite travel bans to the United States for travelers from various countries.

Closer to home, the foreign-born population of the United States includes 11 million undocumented immigrants. In 2014, about two-thirds of these unauthorized immigrant adults had lived in the United States for at least a decade. They have become de facto our neighbors. Lately, we have heard much in the news about the so-called Dreamers, the nearly 790,000 young unauthorized immigrants who have been protected from deportation through the Deferred Action for Childhood Arrivals program. Yet the status of these Dreamers, who arrived to the United States before the age of 16 and know no other country as their own, is currently up in the air.

We need to revisit the views of this 16th-century reformer on hospitality now more than ever.

Pastoral and theological reflections on immigrants and refugees from the perspective of theological traditions, including Catholic and Lutheran, are available. However, as Christians commemorate the 500th anniversary of the Protestant Reformation, it is surprising that little has been said on what Martin Luther’s teaching on hospitality toward strangers and exiles might offer to our current situation. We need to revisit the views of this 16th-century reformer on hospitality now more than ever: We live in an increasingly multiethnic nation, at a time when Christianity’s center of gravity has shifted to the global South, and in a world experiencing the greatest transnational movement of refugees and immigrants in history, including those coming to our shores and their children. In this day and age, I believe we are called to embody a radical hospitality toward these marginal neighbors. Let us rediscover that part of Luther’s teaching that can help us in this task.

In his Lectures on Genesis, chapter 18, where Abraham welcomes the three visitors at Mamre, Luther praises the patriarch as “a beautiful moral example of hospitality.” By arguing that “there is hospitality wherever the church is,” Luther portrays hospitality as a mark of the church’s holiness, so that “those who want to be true members of the church remember” and are “encouraged” to practice it. The church is called to be like Abraham; her members are to care for each other spiritually “by teaching” and bodily “by showing kindness and giving assistance.” The church must be a place of “refreshment” for the weary.

Luther portrays hospitality as a mark of the church’s holiness.

Luther argues that Abraham learned hospitality toward strangers from two sources. First, the experience of God’s people as a community of exiles persecuted because of God’s Word; and second, his own experience as an exile. Ever since Satan got Adam expelled from Paradise, making him the world’s first exile, the enemy has made the people of God the objects of “the hatred of the world” and driven them “out of their homes” into “exile by whatever means he could.” Because exiles are common among Christians, including those persecuted at the time of the Reformation, the church stands as a “refuge of the exiles and the poor.” Due to the oppression of tyrannical bishops and princes in his day, Luther notes that many exiles suffer “misery, thirst, hunger,” and so there must be “some little domain of a godly prince in which there can be room for such people.” Hospitality must be the concern of church and state leaders. Following the example of Abraham, whose “house was open to all” and who “joyfully received strangers,” Luther exhorts Christians with these words: “Let our homes be open to exiles, and let us assist and refresh them.” For the church is the “house” of Abraham in the world.

As an exile himself, Abraham “endured the rigors of the weather in the open country and under the sky; he was often troubled by hunger, often by thirst.” His hardships “enable him to be gentle, kind, and generous toward exiles.” During his sojourn, Abraham also became the object of “the services of pious people” who welcomed him, and “from such experience he learned this rule, that he who receives a brother who is in exile because of the Word receives God Himself in the person of such a brother.” Luther expects all sectors of society to contribute toward exile relief but is disappointed by their overall lack of generosity.

Martin Luther: “Let our homes be open to exiles, and let us assist and refresh them.”

Although Luther focuses on exiles who flee for their lives due to religious persecution, he also reminds Christians to be “generous not only toward the brethren...but also toward those who are strangers in the state, provided that they are not manifestly evil.” For example, if a “Turk” (in today’s language, a Muslim) came to us as a “stranger” and “in distress” we should not disregard him “even though he is not suffering because of the Word.” Even if a Christian’s first responsibility is to those of “the household of faith,” they also should assist others “who experience misfortune.”

Luther sees Abraham as the prime example of hospitality for the New Testament church. The patriarch takes a position of humility toward the three visitors at Mamre in that he does not attract attention to the gifts he shares with them. There is a self-effacing character to Abraham’s hospitality. The focus is on the privilege of being visited by God in needy neighbors and of assuming legitimate burdens placed upon us by them. As one might expect, justification by faith and love go hand in hand in Luther’s description of Abraham. He calls the church to “look upon Abraham not only as a father of faith...but also as a father of good works.” “It is faith...that makes him so eager and ready” to be hospitable.

How do we imitate hospitable Abraham’s faith today?

Having heard a bit of Luther’s voice, how do we imitate hospitable Abraham’s faith today? Luther suggests that Christians, by their actions, must exceed expectations when it comes to treating not only Christian exiles but also those outside the church. At the very least, Christians must not hate or speak ill of these neighbors. Today, they should not ape the incendiary language of the sensationalist media, which portrays refugees and immigrants in the worst possible light.

Moreover, Luther teaches us that Christians must not lump all immigrants together with those who have an evil intent. This suggests we must put a human face on debates about refugee policy and immigration law. Not all refugees and travelers from the Middle East are radical Muslims bent on killing Americans. Not all undocumented immigrants are criminals, rapists or “bad hombres.” Christians must set a higher example and ask deeper questions about the kinds of sufferings these neighbors experience. As church, we must hear their stories with compassion. As citizens and residents, we must also seriously consider whether there is, as Luther would say, “some little domain of a godly prince in which there can be room for such people.” Going through this process of discernment will help us make decisions about advocacy and support for those whom Luther calls exiles on account of God’s Word and other “exiles of the state.”

Some might argue that Luther is not helpful enough because he offers little detail on specific practices or policies for embodying hospitality in the realms of church and state. Others might point out how Luther himself did not always seem to practice hospitality toward certain groups of vulnerable people—his harsh words toward Jews being the most obvious example. To the latter point, we simply admit—and Luther would agree, at least in principle—that on account of the sinful flesh Christians are often inconsistent and do not always practice what they preach or teach. When that happens, we repent and try again with God’s help.

To the former point, we simply note that Luther’s goal in his teaching on Abraham’s hospitality is much more basic. By praising Abraham’s acts of welcome, Luther calls the church back to that spiritual disposition or virtue in the heart that must precede and prepare the way for imagining more specific church practices or state policies that adequately account for the strangers among us. If the heart is not dealt with first, little holiness can be expected from God’s people.

Conversely, where the church lives by faith, she will make her mark in the world. On this 500th anniversary of the Reformation, let us celebrate Martin Luther’s call for the church to reclaim her identity as the house of Abraham in a world filled with people on the move and pray that the Spirit of God will make us an ever more radical community of hospitality for such a time as this. 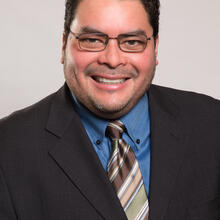 Rev. Dr. Leopoldo A. Sánchez M. is the Werner R. H. and Elizabeth R. Krause Professor of Hispanic Ministries at Concordia Seminary, St. Louis, where he teaches systematic theology and serves as director of the Center for Hispanic Studies. He co-edited Immigrant Neighbors among Us: Immigration across Theological Traditions with M. Daniel Carroll R., and served as the main drafter for The Lutheran Church—Missouri Synod Commission on Theology and Church Relations report Immigrants among Us: A Lutheran Framework for Addressing Immigration Issues.

Keeping dreamers out of the U.S. hurts the middle class. Recall the phrase “starve the beast”, the “beast” being the federal government. Starving means cutting federal revenue either by cutting taxes or cutting the tax base or both. Romney perhaps lost the 2012 election noting that 47% (of the tax base) paid no federal income tax. The nonpaying tax base was only 32% in 2004, 24% in 1994 and 18% in 1984. Starving the middle class obviously can starve the beast. Keeping nearly a million tax paying dreamers (and their parents) out of the U.S. can also starve the beast.