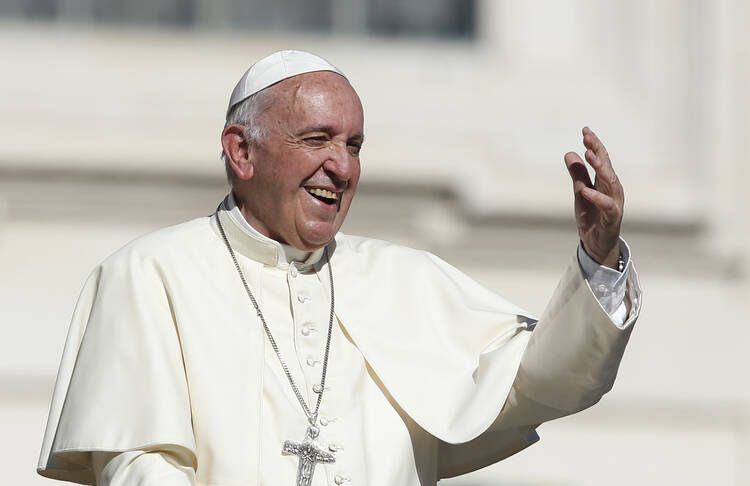 Pope Francis gestures as he leaves his general audience in St. Peter's Square at the Vatican Oct. 11. (CNS photo/Paul Haring)

President Trump became Twitter’s most followed global leader last month, knocking off Pope Francis, who previously held the title. But Vatican Radio announced today that Pope Francis has passed the 40 million followers mark, which appears for now to tie him with the U.S. president.

While the pope does not hit send on his own tweets, Msgr. Vigano said, he personally approves each message before it is published and sometimes chooses which themes and subjects he would like highlighted. He has tweeted about subjects ranging from Jesus and the Gospels to the World Cup and human trafficking.

During Pope Francis’ four and a half years in office, the number of followers has grown from about three million, who followed Pope Benedict XVI, to the more than 40 million today. Early on, Pope Francis would publish two or three tweets each week, usually snippets from homilies or speeches. More recently, he tweets almost daily, often a call to work for peace or a short reflection on a saint, including a tweet he sent earlier today:

Like Saint John XXIII, whom we remember today, let us witness to God’s goodness and mercy before the Church and the world.

The pope is also on Instagram, where he shares photos and videos with his nearly five million followers. When the account launched last year, Pope Francis set a record by collecting one million followers in just 12 hours, a record previously held by soccer superstar David Beckham.

Pope Francis is the most-followed world leader on Twitter—but Trump is closing in.
Michael J. O’Loughlin

The Associated Press is a joint media venture. Maybe Twitter should be too.
Nathan Schneider

Last month, Twitter rolled out a pilot program that allows some users to use 280 characters in each tweet, double the 140 character limit that was a feature of the original product when it launched in 2006.

And while the pope and the president continue to use Twitter to advance their agendas, it appears that at least for now, they are each still limited to the 140-character format.