A Jesuit on El Camino with The New York Times 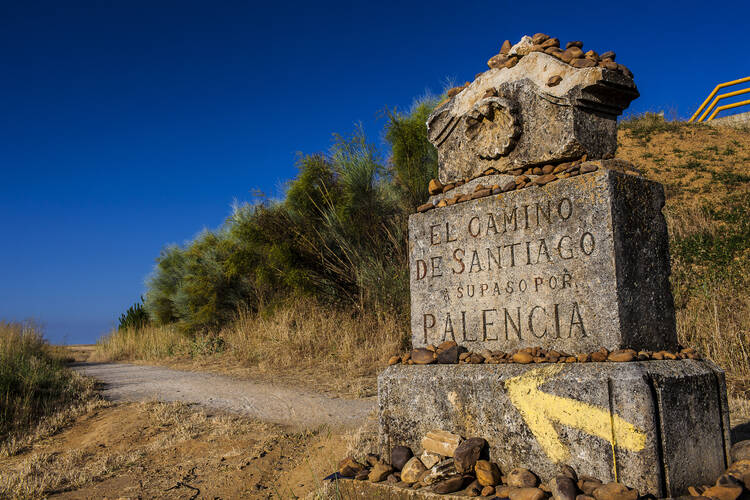 Tuesday, Oct. 3, was our first walk, a 10-mile, six-hour march with a band of 23 men and women, including two families from Singapore, plus a mix of pilgrims from Ohio, Tennessee and Georgia, all welcomed by The New York Times writer Dan Barry and three professional Spanish guides.

I arrived Sunday slightly discombobulated and sleepless, frustrated by the London airport’s “thorough” security check, which empties most of your baggage on different counters while a guard pats you down twice and someone else declines to return your dental floss and belt.

The great towering Guggenheim Museum, which opened along the river in the heart of Bilbao in 1997, snapped me out of it and challenged me with its towering room-to-room displays. It started for me with Robert Motherwell’s upsetting “Black,” a huge screen painted all black, except for a few inches of white hidden in the lower left-hand corner, calling on Motherwell’s powerful sense of the tragedy of the Spanish Civil War.

We are learning more about one another and ourselves with every passing day.

My next discovery was the work of Bill Viola, whose powerful video art glistened on total walls with four moving scenes: one, a long, silent parade of people solemnly hiking a path in the woods, heading into we know not where; on another wall a small group of men and women hustle past or gossip next to an office street door. There a homeless man, his hat pulled down, clutches a cardboard that asks HELP as most swoop by him offering a touch but no money. I glanced away for a second, and he disappeared.

A little later, as I stepped out of the building into the long patio where the river, integrated into the building’s design, runs by, a great billowing cloud of smoke burst out of a wall and filled all the open space. I could not see two feet in front me. Children loved it. A terrorist attack? Maintenance accident? No, it was Fujiko Nakaya, Japanese inventor of “fog sculpture,” a “radical departure in the history of art and technology,” says the program note.

Our trip might be seen as an individualist’s battle between his or her personal limitations and the 10- to 16-mile treks up and down the rocky hills of the Spanish countryside. The rolling mountains are often beautiful—from the oak and beech tree forests bordering the trails to the open grazing fields where sheep, goats, rams, cattle and even horses unknowingly bulk themselves up for the slaughterhouses. In each charming little town the houses are white, the roofs are red and the streets are empty. The younger generation has fled to the cities, and the endless stream of pilgrims tramps through the narrow streets.

The younger generation has fled to the cities, and the endless stream of pilgrims tramps through the narrow streets.

The mountains and hills recall the childhood ditty, “The bear went over the Mountain,” in which the bear always finds another mountain; his journey will never end. The trails can be brutal—rocks, huge, big, sharp and small—all enemies, all hard and threatening where a fall would lead to bloody hands and broken teeth; and the mud, misshapen by countless boots, forms both holes and walls to trip us up. Memorials mark the way, including some for those who trudged too close to the edge of the path and tumbled endlessly down into more stones and underbrush. Four have fallen in recent years, we are told; the body of one of them was not found for 15 days.

We started off in northern Spain, strolling the boardwalk of San Sebastian, hungry for a chance to plunge into the calm but rolling surf, then continued to St. Jean Pied de Port, a beautiful hilly old city in France whose architecture makes one feel he has suddenly slipped back into the 14th century. By the third day we were in Pamplona, Spain, checking out the starting line for the running of the bulls, with a band of foolhardy male townsmen pumped with beer and wine, racing ahead of them. For the traveling Jesuit, here is where young soldier Ignatius Loyola broke his legs with a cannonball.

Lessons of the Camino: What I learned from secular seekers on the way to Compostela
Arthur Paul Boers

I yearned for Burgos because I had first seen it at age 19 during my junior year abroad from Fordham in 1953. I remembered the sheer size of the church with a young man’s awe; to call it overwhelming does not do it justice. Rather than think of it as one cathedral, imagine a collection of 15 chapels—one housing the tomb of El Cid and all competing with one another with splendor and statues of 13th-century spiritual and secular leaders.

Why are we here? We are learning more about one another and ourselves with every passing day, listening to one another talk about everything from our own families to how countries and parts of countries are drawing away from one another rather than unify. The average age of the group is early 50s; two of us are over the mid-70 mark—including a Catholic priest old enough to be the father or grandfather of everyone else. They care for him if he walks more slowly over rocks and struggles to climb and descend stairs gracefully. A young woman damaged her foot in a fall and is helped with a wheelchair.

The last three nights have been passed in former monasteries converted into beautiful hotels. I write this from the fifth-century Royal Monastery of Saint Zoilo, which served as a Jesuit high school from 1854 to 1959. Tomorrow morning the priest will say a 7:30 a.m. Mass and send us off on the trail again. Meanwhile, the spirit of St. James, one of Jesus’ three best friends, awaits.

Raymond A. Schroth, S.J., is an editor emeritus at America.