Leader of Vatican finance reform accused of spying on personnel 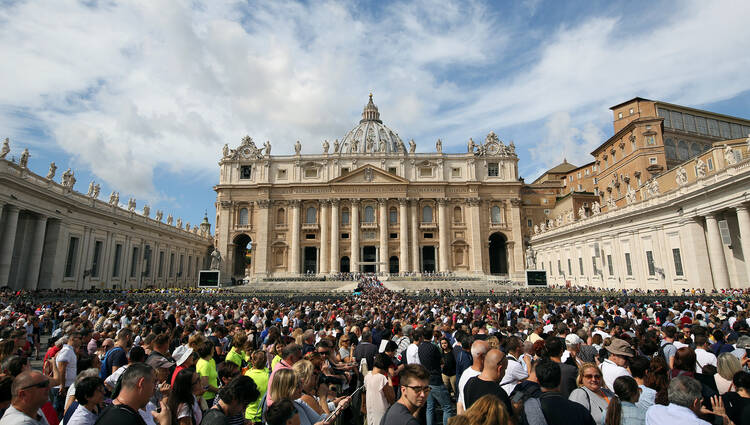 A large crowd is seen as Pope Francis leads the Angelus in St. Peter's Square Sept. 17 at the Vatican. (CNS photo/Stefano Rellandini, Reuters)

The Vatican has accused its first-ever auditor general of “going beyond his powers" in hiring an external firm to carry out investigations on the private lives of officials of the Holy See. The announcement comes after the auditor-general, Libero Milone, who resigned last June, broke his silence on Saturday and told reporters that he had been forced to resign or face arrest on fabricated charges. He claims that what happened was part of an effort by the old guard to slow down Pope Francis’ reform of Vatican finances.

While the declarations by Mr. Milone and the Vatican published today shed some light on the mystery surrounding his sudden resignation last June, they also raise many questions. Two years earlier, amid much publicity, the Vatican hired him on a five-year contract. He served as the first auditor general and was part of Pope Francis’ efforts to ensure total transparency and integrity in all Vatican finances.

Mr. Milone was given sweeping powers to control and investigate the financial operations of the different Vatican offices.

Mr. Milone was given sweeping powers to control and investigate the financial operations of the different Vatican offices. He was also able to open investigations if he had reasonable grounds for doing so. But then, on June 19, the Vatican announced his resignation, without providing any explanation, except that the resignation was by mutual agreement.

Some days ago, Mr. Milone, 69, called several outlets to his lawyer’s office in Rome. He spoke for three hours, according to Corriere della Sera, which published an interview with him today. He said that he decided to speak now because news had been leaked “by a power group” in the Vatican that challenged his reputation and professionalism and because of the way that he had been mistreated.

Speaking to Corriere della Sera he said, “I want to be clear: I did not resign voluntarily. I was threatened with arrest. The head of the [Vatican] Gendarmerie threatened to force me to sign the letter [of resignation] that they had ready.” He added, “I wanted to do good for the church, to reform it as I was asked, but they did not allow me [to do so].”

He told the Italian daily that while he was chosen for the post of auditor-general by the Secretary of State, Cardinal Pietro Parolin, and by cardinals Reinhard Marx and George Pell, the Pope had made the final decision. He said that he was not looking for the job but that they had sought him out. He noted, “I accepted because I believed in the reforms of Pope Francis.”

His offices were searched, his mobile phone was confiscated, and he was given the choice of signing the letter of resignation or spending the night in the Gendarmerie.

On June 19, Mr. Milone said that he was received by Archbishop Angelo Becciu, the third-ranking official in the Vatican, to speak about contracts for his employees. Instead, the archbishop told him that the pope’s relationship of trust with him had been weakened and he wanted his resignation. Mr. Milone asked why and when the reasons were given he said he considered them “false and constructed to deceive both him and the pope.” He asked to speak to the pope—something he had not been able to do for some time—but was told this was not possible. Instead, he was told that he had to go to the Gendarmerie.

When he went there, he said that he was treated aggressively and was asked to confess and admit to the charges against him. He said that he had nothing to confess. His offices were searched; his mobile phone was confiscated; and he was given the choice of signing the letter of resignation or spending the night in the Gendarmerie. He signed the letter.

Reuters reports that Mr. Milone, who had worked for the United Nations and Fiat and was Director of Deloitte & Touche, claimed he had found irregularities (in the Vatican finances) but did not feel free to give details “because of non-disclosure agreements.” The Reuters report said that when he was asked to resign on June 19, he was informed that he was being dismissed based on a seven-month investigation by Vatican police. They presented him with facts that Mr. Milone described as “fake, fabricated” and without any “credible foundation.”

According to Reuters, he said he had been accused of misuse of funds by hiring an outside firm to check the security of computers in the Vatican offices where he worked. He revealed that the Vatican prosecutor who signed the order for the search of his office charged him with carrying out investigations “in clear violation” of the statutes of his department. Furthermore, Mr. Milone noted that the search warrant also accused him of looking into the affairs of high-ranking members of the Vatican without authorization. He explained that this referred to his “looking into suspicions about the possible conflict of interest of an Italian cardinal, whom he declined to name.”

Reuters subsequently interviewed Archbishop Becciu who denounced Mr. Milone’s claims as “false and unjustified.” He said the former auditor general “went against all the rules and was spying on the private lives of his superiors and staff, including me.” The archbishop added, “if he had not agreed to resign, we would have prosecuted him.” Archbishop Becciu said the pope was told of the investigation and the evidence before Mr. Milone was asked to resign.

Reuters also spoke to the chief of the Vatican’s Gendarmerie, Domenico Gianni, who told reporters that there had been “overwhelming evidence” against Milone, but neither he nor the archbishop gave details.

After news of Mr. Milone’s revelations was published today, the Vatican press office issued a statement in which the Holy See noted “with surprise and regret” the declarations of the former auditor-general. It said he had broken the agreement “to keep confidential the reasons for his dismissal.” It recalled that according to the statutes for his office, the auditor-general’s task was “to analyze the balance sheets and accounts of the Holy See and the administrations linked to it.” But, it charged, he had “exceeded his competencies, and illegally hired an external firm to carry out investigative actions on the private lives of exponents of the Holy See.”

The Vatican said this was “not only a crime, but it also irredeemably deteriorated the trust placed in Mr. Milone, who, when confronted with his responsibility, freely accepted to tender his resignation.” The Vatican statement concluded by assuring people that “the investigations were carried out scrupulously and with respect for the person.”

What will happen next is not clear. Mr. Milone told Corriere della Sera that he has not ruled out a law suit.

Rome-based associate editor Gerard O’Connell is responsible for planning and producing America’s coverage of the papacy, Vatican affairs and Rome events. He writes a weekly column in the print edition of America called “Vatican Dispatch” and files reports