How do you rate the quality of liturgy in your parish? 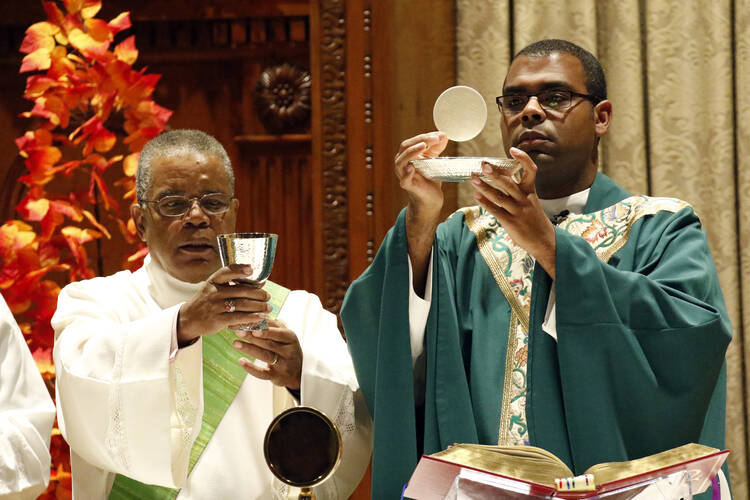 How do you rate the quality of liturgy in your parish?

When asked to rate the quality of their parish liturgy, the majority of respondents told America that it was either high (29 percent) or very high (27 percent). Juanita, of Florida, rated the quality of liturgy at her parish as very high, writing, “We have a priest who makes everyone feel welcome, says Mass with great reverence and gives meaningful homilies.”

Readers who judged their parish liturgy to be of high quality were more likely than others to call for better lay engagement at their parish. Sheila, of Minnesota, explained, “We are a welcoming parish, with well-done liturgies, but we want all present to be actively involved and feel they belong.”

Other respondents told us that liturgy was of neither low nor high quality in their parish (22 percent). Only 21 percent of readers rated their parish liturgy as low (16 percent) or very low (5 percent). Kelly, also of Minnesota, told America: “I always have high hopes. The congregation seems responsive, but a sense of togetherness is missing. Our parish has been suffering for a number of years. I appreciate our pastor; his homilies just usually lose me.”

Readers who were dissatisfied with the quality of liturgy at their parish repeatedly cited preaching as most in need of improvement. Daniel, of Arkansas, described the preaching at his parish. “We have a very small parish and do the best we can. If enthusiasm were the criterion, we’d have great homilies,” he said. “But lack of preparation, disorganization, questionable (when not simply incorrect) theology, and verbosity don’t equal good preaching.” 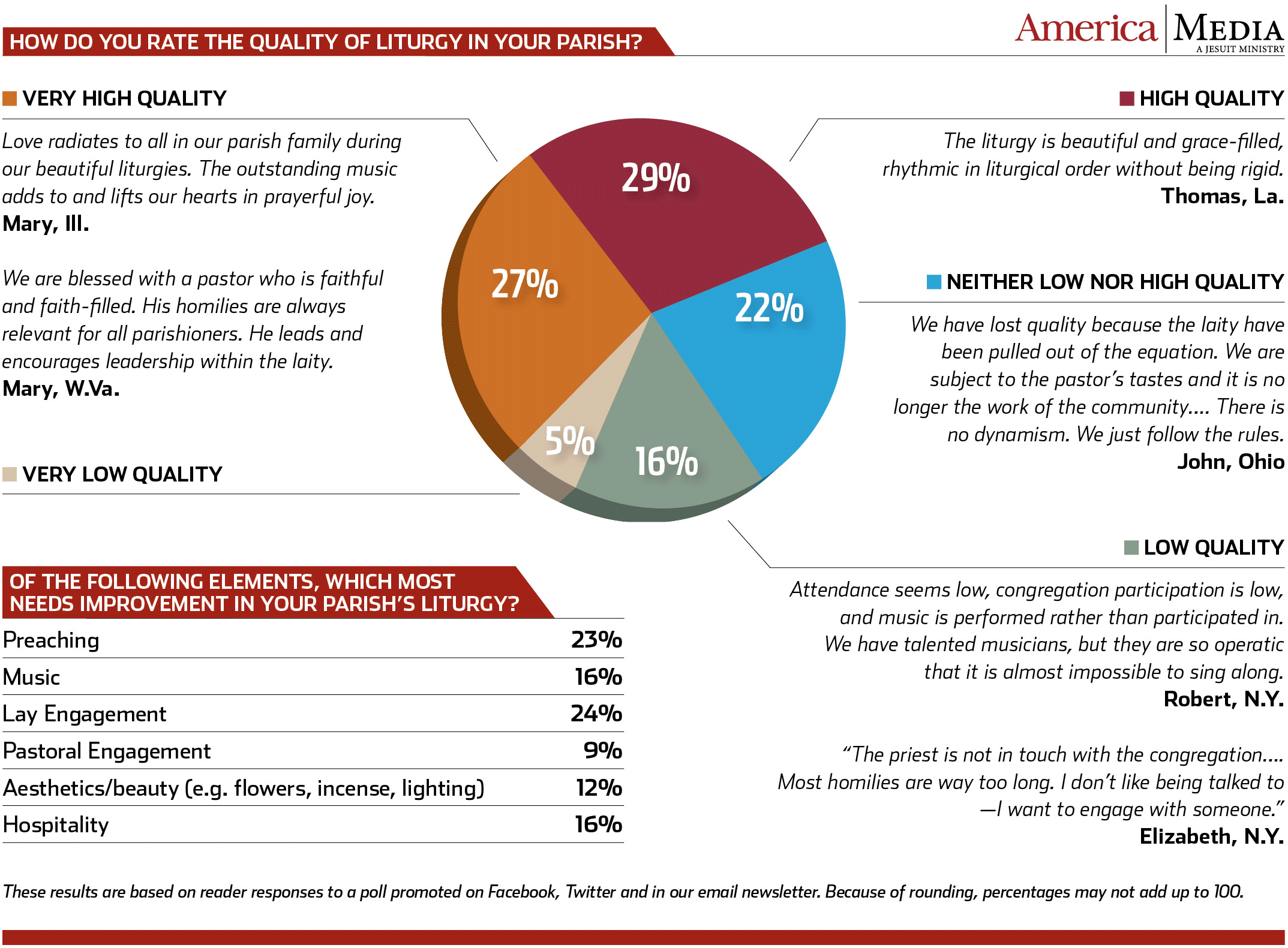 The pope’s new liturgy document: who was involved and what that tells us
Massimo Faggioli

Oh why didn't I see this earlier. . .At the risk of being awarded the dreaded "Liturgy Police" moniker, my parish priest makes up his own Mass (no Gloria ever, no Creed ever, ad libbed Eucharistic prayers). Involvement? Well, of course since there is no Gloria or Creed we obviously don't say those. We also get to hear the musicians sing a song instead of a Responsorial Psalm, so we don't say those either. But we do get to say "A MEN" every time Father asks "Can I hear an Amen?" The kids get to come up 'around the table' for First Communion. The readers sometimes get to act out the gospel if it's one of the 'good ones' like the Prodigal Son. You'll get pretty much a 50/50% response --half the people think that having a 'spontaneous' liturgy like this IS 'active participation'; half think that it's taking away what little voice there is, and only a consciousness of "well we have to come to meet our obligation' brings them, ever more reluctantly, to the pews on Sunday. The kids like Santa and the Easter Bunny and the various mascots and when Father wears the school sweatshirt to celebrate a team victory the night before, but I notice fewer of them at Mass every year as well.

The homily? Slightly left of Bernie Sanders, as in Father, "When I was growing up we heard the story of the Pharisee and the Publican, and for the life of me I couldn't understand why God was favoring the wrong party" and much of the order of how St. Paul was a sexist and Jesus was wrong in His treatment of women but of course they were limited by 'the times'. We're always on a journey, but remarkably little is ever said of where the journey is going TO, only that along the way we are all going together and need to be nice to each other because WE ARE CHURCH.

So Mass attendance may not be Hell on earth, but Purgatory, maybe.

It just seems to me, lowly lay person that I am, that there is plenty of opportunity in the liturgy for the priest (or deacon) to let his personality come through. There are plenty of places where one has a legitimate 'choice' to make so that it is not always the very same Eucharistic prayer each Sunday, the same Psalms, the same greeting, the same Penitential Rite (oh I forgot, we never have one of those either). I wouldn't blink an eye though if the priest always did option "A" for each 'option' (or B or C or whatever). But when it comes to him not giving us an option at all because he has decided to make it all up on his own, well, then, we are being denied the opportunity for full and active participation, which I think is a crying shame, not just for the older ones like me, but for the younger ones who are being deprived of the liturgy that we are 'supposed' to have, and until they experience it elsewhere, aren't even aware of how they are being liturgically starved.

I don't know the quality of the liturgy at my (former) cathedral parish. Why? Because I left the Church of Rome the end of CY2006. Why? B16. I had been a weekly worshiper until then, and I was just two months shy of age 59. I found Pope Ratzinger's behavior toxic to the church and especially to our LGBT brothers and sisters. I was determined no longer to *enable* this papacy.

The cathedral had a competent pastor, and his predecessor was known for stressing good preaching, good liturgy, and good music --- as well as hospitality to everybody, regardless of ethnic or social background, sexual orientation, or any other factor. As I recall, during his 14 years in residence, the parish grew from perhaps 100 households to about two thousand households in 41 zip codes from two states! It was a vibrant parish, apparently enough to attract money from the Lily Endowment.

As things stand, I won't be returning to the Church of Rome even *if* the U.S. bishops were to implement the 1998 ICEL translation. Too much orthotoxy remaining in this (purported) communion of local churches. Thirty-five years under JPII and B16 have left their stain.. It likely would take several future popes similar to Francis to restore health and vitality, including a restored tradition of conciliarity and subsidiarity. In the meantime, this Catholic will take his chances directly with God.