The Vatican denies 'ad orientem' changes to Mass are coming 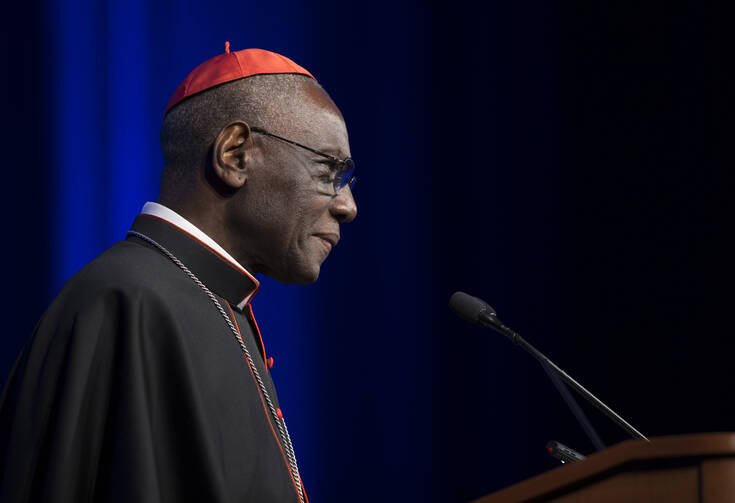 The Vatican has denied media reports, based on recent statements made by Cardinal Robert Sarah in London, claiming that there will be changes in the celebration of the Mass from next Advent with the priest facing the east, and that “a reform of the reform” of the liturgy is under way.

The Vatican statement, issued on the evening of July 11 by Federico Lombardi, S.J., director of the Holy See Press Office, said “there are no new liturgical directives starting from next Advent, as someone has improperly deduced from some words of Cardinal Sarah, and it is better to avoid using the expression ‘the reform of the reform,’ referring to the liturgy, given that this has sometimes been the source of misunderstanding.”

The Vatican statement declared that “all this was expressly agreed during a recent audience given by the pope to the said Cardinal Prefect of the Congregation for Divine Worship.” That meeting took place last Saturday, July 9, as reported in the Press Office bulletin.

The cardinal’s statements in London, made at the Sacra Liturgia conference on July 5, caused consternation and much confusion in many parts of the church across the world, and in the Vatican, too. They raised the fundamental question as to whether the cardinal was acting on his own accord or whether he had received authorization from higher levels in the Vatican for saying such things. Today’s Vatican communique makes clear that Francis never authorized any such statements and that these do not correspond to what is envisaged in the liturgical books approved by the pope.

VATICAN STATEMENT: The following is a working translation of the Vatican press statement made by America’s Vatican correspondent, in the absence of an official translation.

SOME CLARIFICATIONS ON THE CELEBRATION OF THE MASS

A clarification is opportune following news reports circulating in the media after a conference held in London some days ago by Cardinal Sarah, the Prefect of the Congregation for Divine Worship.

Cardinal Sarah has always been rightly concerned for the dignity of the celebration of the Mass, in a way that expresses adequately the attitude of respect and adoration for the Eucharistic mystery.

Some expressions were nevertheless badly interpreted as if they announced new indications differing from those given to-date in the liturgical norms and in the words of the pope on the celebration (looking) towards the people and on the ordinary rite of Mass.

It is therefore good to recall that in the General Order of the Roman Missale (Institutio Generalis Missalis Romani), that contains the norms relating to the Eucharistic celebration and (which) are still fully in force, No. 299 states that “the altar is built separated from the wall, so as to be able to move around it easily and to celebrate looking towards the people, which thing is convenient to realize wherever possible. The altar is to be place in a way so as to really constitute the center towards which the attention of the people spontaneously converges.”

Pope Francis, for his part, on the occasion of his visit to the Dicastery (Congregation for Divine Worship) has expressly recalled that the “ordinary” form of the celebration of the Mass is that envisaged by the Missal promulgated by Paul VI, while that “extraordinary” (form), which was permitted by by Pope Benedict XVI for the purposes and the modalities explained by him in the Motu Proprio “Summorum Ponticium,” must not take the place of the “ordinary” (form).

There are therefore no new liturgical directives beginning from next Advent, as someone has improperly deduced from some words of Cardinal Sarah, and it is better to avoid using the expression “the reform of the reform,” in referring to the liturgy, given that this has sometimes been the source of misunderstanding.

Significantly, the Vatican communique added that “all this was expressly agreed during a recent audience given by the pope to the said Cardinal Prefect of the Congregation for Divine Worship.”