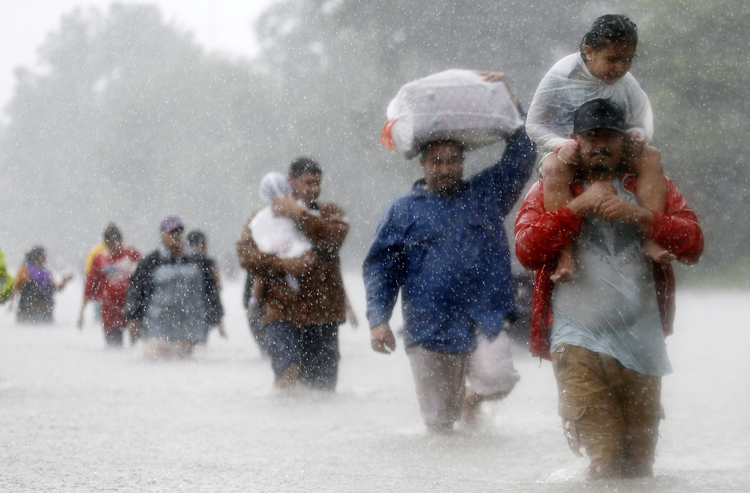 “Then God said: Let there be a dome in the middle of the waters, to separate one body of water from the other. God made the dome, and it separated the water below the dome from the water above the dome. And so it happened.”

The upper expanse became the sky, says the Book of Genesis, while the lower expanse formed the seas and oceans. Both waters flow from the same source, but they have different ends, which determine the different ways in which we experience them. St. Ignatius Loyola had a related insight: Everything in creation is good only insofar as it has within it the power of calling forth from us a deeper response to God and to one another.

The most recent issue of America included a feature story by Sonja Livingston about a ministry that uses fan boats to transport the Eucharist in procession through the backwaters of a Southern Louisiana bayou. Led by the Rev. Michael Champagne, the ministry team uses the waterway as an avenue of grace, bringing confession, the Eucharist and, presumably, even the waters of baptism to the people they serve.

Yet the rising floodwaters of Hurricane Harvey also carried ministers of life.

That’s one expanse of water. Another is the expanse of water that currently covers Houston, Tex., and large swaths of the Gulf Coast. Those waters brought forth one of the most destructive natural events in U.S. history. Yet the rising floodwaters of Hurricane Harvey also carried ministers of life, first responders, national guardsmen and concerned neighbors, people whose life-saving actions testify to the best in human beings. “When I was a boy and I would see scary things in the news,” the Rev. Fred Rogers once said, “my mother would say to me, ‘Look for the helpers. You will always find people who are helping.’”

Two forms of water; two ways of looking at the same water; yet all have the same source: the one God, living and true, who even now presides over the world he spoke into being, a world marked by as much light as darkness, as much life as death. That’s cause for hope.

This was all on my mind when we received the following report last week from Jeff Johnson, S.J., the president of Strake Jesuit High School in Houston. He wrote this from the eye of Hurricane Harvey. It deserves a wide readership, so I include it here, along with our prayers for him and all his neighbors.

Words fail to describe what has been happening here in Houston. The rain brought by Hurricane Harvey has not stopped for four days, but our support and care for one another seem limitless.

In my prayers, I am filled with gratitude that people are so generous and concerned for us.

I have received many calls and emails of support from Jesuit apostolates all over the country, and we deeply appreciate the prayers and promises of help. Much help will be needed in the weeks and months after this storm moves on. As of now, our Strake Jesuit families have been reaching out to one another and their neighbors as they can. Yesterday, one of our freshmen, Declan Conner, along with some other Strake Jesuit boys, was navigating his fishing boat through the streets of his neighborhood rescuing people trapped in their homes. You can see him in action on Twitter. He is a brave young man and I cannot tell you how proud of him I am.

No one will be surprised to know that our Jesuit family is responding generously. I have had faculty and staff members offer to leave their own families and help in any way they can. As always, I am amazed by our team—they continually prove to be “for others” at their core.

Several of our families woke this morning to new orders to evacuate their homes, but some of them are trapped. We are offering shelter here at the school, where it is still dry and safe, but getting around the city is a great challenge.

We are in the midst of this mess. It feels too early to reflect on this situation or offer pats on the back, and I am afraid there is more to come. Nonetheless, in my prayers, I am filled with gratitude that people are so generous and concerned for us. It means a lot to hear of the prayers of others from all over the country. Our Jesuit community—composed of Jesuits from Strake Jesuit and Cristo Rey Jesuit—has been praying quite a bit and we have celebrated Mass each day and will continue to do so as a community of prayer. I have found tremendous strength in this.

I was very moved to hear from Jesuit High School in New Orleans. A few years ago, we were able to help them out in the aftermath of Hurricane Katrina. We are connected by this bond of mutual support, and they are eager to make good on this bond. I am so thankful for their generosity.

Please keep praying for us. It truly helps. It helps us keep our resolve and renew our faith in God who cares so deeply for us.

It is good to know that people are stepping up to help in the aftermath of hurricane Harvey. And then Irma. We also need to recognize that scientists have been predicting more storms and more destructive storms as part of climate change. Now that the storms are taking place, we are like flies stuck in amber with a corrupt and ignorant president and his corrupt party in control of the House and Senate. Prayer is good, but so is a belief in science.