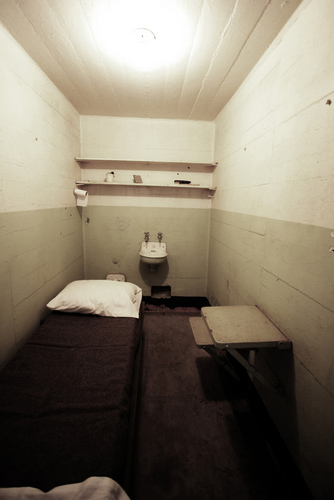 Solitary confinement—also referred to as isolation, “the hole,” permanent lockdown or segregated, restricted or supermax housing—is the practice of holding prisoners in small, windowless cells for 23 or 24 hours a day. There is little or no human contact and minimal access to rehabilitative services and medical and mental health treatment. Contrary to popular belief, the use of solitary confinement is neither the best way nor the only way to control the most violent prisoners. Furthermore, it is increasingly being used as a punishment for violating prison rules, even minor, nonviolent infractions, or as a behavioral control mechanism for the mentally ill. Who goes to the hole, and for how long, is often decided with little or no due process.

In 1989 California became the first state to build a supermax prison (Pelican Bay), a facility built for long-term solitary confinement. Today at least 25,000 prisoners are held in supermax facilities in the United States, and as many as 80,000 others are held in restricted housing units elsewhere—sometimes for months, years or decades. In Pelican Bay the average stay for a person in the Security Housing Unit is seven and a half years. Nearly 100 prisoners at Pelican have been in solitary for more than 20 years.

Human beings are by nature social beings who require human contact for their psychological health and development. Studies have shown that prolonged isolation actually changes how the brain works and can result in impairments and abnormalities akin to a traumatic injury. Psychological effects can include auditory and visual hallucinations, delirium, self-mutilation, insomnia, paranoia, uncontrollable feelings of rage and fear, post-traumatic stress disorder and an increased risk of suicide. Most prison suicides occur in solitary confinement.

The National Religious Campaign Against Torture, which includes 314 religious organizations as members, has led the way in educating people of faith about the damaging consequences of prolonged solitary confinement, the urgent moral questions it raises and the need to abolish its use in U.S. prisons. “Prolonged solitary confinement is torture in your backyard,” says the campaign’s Web site, and its use “violates the inherent, God-given dignity and worth of every person.” In 2000 the U.S. Catholic bishops issued a pastoral letter on crime and criminal justice that stated their opposition to “the increasing use of isolation units, especially in the absence of due process.”

The U.N. Convention Against Torture, ratified by the U.S. Congress in 1994, defines torture as “any act by which severe pain or suffering, whether physical or mental, is intentionally inflicted on a person” by a public official in order to obtain information, punish, coerce or discriminate against the person. The use of prolonged solitary confinement meets this standard and should be immediately abolished. It also violates the spirit of the U.S. Constitution’s protection against “cruel and unusual punishments.” Juan E. Méndez, the U.N.’s special rapporteur on torture, has said that “solitary confinement should be used only in very exceptional circumstances, for as short a time as possible.” While some mental damage can result from just a few days of isolation, Mr. Méndez explained, “Indefinite and prolonged solitary confinement, in excess of 15 days, should also be subject to an absolute prohibition.”

In order to confront the problem of prison violence, the focus must shift from punishment to prevention. Great Britain did just this, beginning in the 1980s, with impressive results. Instead of using humiliation and confrontation, which only made things worse, the British reduced the use of solitary confinement and allowed their most dangerous prisoners to have more opportunities for work, education, programming and mental health treatment. As a result, the need for solitary confinement in British prisons became negligible. The National Institute of Corrections, which will conduct the assessment of U.S. federal prisons, has already helped Mississippi reduce its restricted housing population by 75 percent and prison violence by 50 percent. Other federal and state prisons should follow suit. Respect for the human dignity of prisoners demands no less.

Show Comments (
3
)
Comments are automatically closed two weeks after an article's initial publication. See our comments policy for more.
Mike Evans
7 years 7 months ago
Solitary confinement whether in a local jail or in a supermax facility is simply cruel and unusual punishment. It brings on what it tries to change: anger, mental illness, paranoia, fear, and then - death. While we often see pictures of overcrowding and filthy conditions in foreign prisons, we in America seem to think we are superior by "sanitizing" our prisons. The degradation of the human mind and person are just different, but not in degree. A friend of mine was a chaplain at a Calif. prison. Everyday he would walk the hallways in the solitary confinement area, knock on each cell door, and anounce in a strong voice that he was present for them. Later in chapel services many prisoners told him that voice, even when they couldn't respond, was a lifesaver and brought them hope that the torture would end. St. Peter in chains? Come angels, and release him and his companions.
Tom Schneck
7 years 7 months ago
This is a very nice piece that reminds me of when I was a brand new lawyer many years ago, I volunteered to help on indigent criminal appeals at the request of local courts. My first appeal was a felony conviction that was upheld with a curt postcard from the appellate court marked "Appeal denied". A few months later I got a letter from my client, a big football player, saying he was placed in the hole at San Quentin prison about 10 days earlier because there was a jail stabbing of a guard and he was thought to be a leader among the prisoners who were in the vicinity of the stabbing. He wrote to me and told me that conditions were bad, he was sick with a bad cold, or something worse, and the only medication were a few aspirins thrown to him by someone. I filed a writ of habeas corpus with the court and, to my surprise, the judge ordered the State to respond. On the date that the State's response was due, my client was released from the hole and my writ became moot. There were several things that I learned, some about the justice system and some about Constitutional law. Its a bit ironic that criminal defense attorneys seem to be the principal practitioners of Constitutional law and perhaps for this reason, we as American tend to take the U.S. Constitution for granted or minimize its importance. But non-criminal aspects, such as freedom of the press, free speech and religious liberty are among the rights that should be cherished by Americans because these rights do not exist in many other places. As this article relates, the U.S. Catholic Bishops have stood up for due process in criminal cases, citing isolation cases, and in other recent articles in this magazine, have stood up for religious liberty. I am convinced that people of faith are the stalwarts of freedom.
krkr games
4 years 7 months ago
there are many useful and interesting article .العاب250العاب جديدةالعاب سياراتالعاب تلبيس بناتالعاب طبخ

This article also appeared in print, under the headline “A Solitary Scandal,” in the March 18, 2013, issue.