Pope Francis: Pray to God to free us of the “inhuman violence” of terrorism 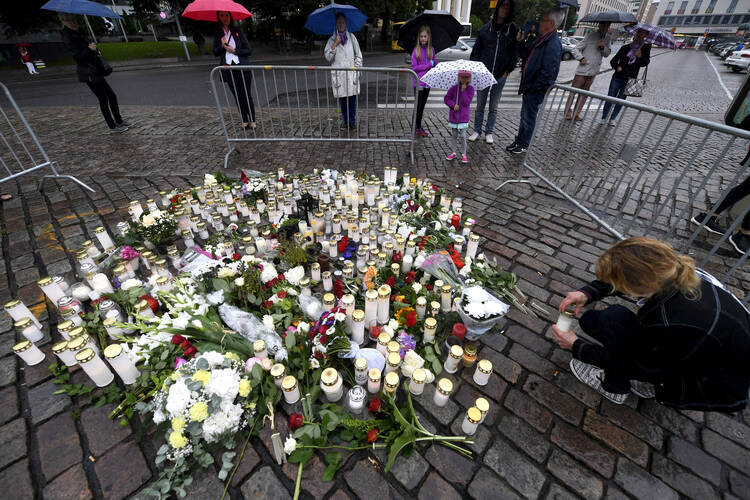 A woman places a candle by floral tributes for the victims of an attack at Turku Market Square on Friday, in Turku, Finland, Saturday, Aug. 19, 2017. (Vesa Moilanen/Lehtikuva via AP)

Pope Francis has called on people everywhere to pray to God “to free the world of this inhuman violence” of acts of terrorism that killed and injured victims in three countries over the past week.

“We carry in our hearts the pain of the acts of terrorism that in these last days have caused numerous victims in Burkina Faso, in Spain and in Finland,” the pope said on Sunday, Aug. 20, in St. Peter’s Square after praying with Romans and thousands of pilgrims from many countries, including new seminarians from the North American College in Rome.

Pope Francis: “We carry in our hearts the pain of the acts of terrorism that in these last days have caused.”

Last Sunday evening, Aug. 13, gunmen shot dead 18 people in a terrorist attack on a Turkish restaurant in Ouagadougou, the capital city of Burkina Faso, a landlocked country in West Africa. The victims that have been identified so far included eight foreigners—from Kuwait, Canada, France, Lebanon, Nigeria, Senegal and Turkey—and seven locals. Two of the terrorists were killed in the subsequent siege by police. According to the BBC, the attack is believed to have been conducted by one of the affiliates of Al-Qaeda that are active in the Sahel Region. A similar attack on a nearby café last January killed 30 people.

Last Thursday evening, Aug. 17, twin terrorist attacks in the city of Barcelona and the seaside resort of Cambrils killed 14 people and injured some 130 people from 34 countries. ISIS claimed responsibility for the attacks in Spain. Spanish security forces believe the attacks were conducted by a jihadist cell of at least 12 people.

Then on Friday, Aug. 18, a man with a knife killed two women and injured eight people from at least three countries in Finland’s southwestern city of Turku. This was the first such attack in Finland. The Finnish authorities are treating it as an act of terrorism. Police shot and arrested the attacker, an 18-year-old Moroccan.

Today, Pope Francis invited everyone to “pray for all the dead, for the injured and for their family relatives.”

Furthermore, he said, “Let us pray with supplication to the Lord, the God of mercy and of peace, to free the world of this inhuman violence.”

He invited everyone in St. Peter’s Square to “pray in silence” for these intentions, and then led them in reciting the Ave Maria.

Mr. O' Connell should have written: Holy Father, this incident is not some generic terrorism. It's ISIS related Islamic terrorism. Call it for what it is. The Holy Father tweeted:“Prego per tutte le vittime degli attentati di questi giorni. La violenza cieca del terrorismo non trovi più spazio nel mondo”. I pray for all the victims of the recent attacks. May the blind violence of terrorism find no place anymore in the world. The Holy Father and many in the West have a willful blindness about the fact that Islam has a big problem with violence in its name based on various passages in the Koran. 123 verses in the Koran talk about fighting and killing in the name of Allah, vaticanista Marco Tosatti pointed out. He also pointed out that Benedict XVI had the courage to put this fact on the table and not make believe it does not exist. The continued willful blindness of many in the West refusing to call this terrorism what it is will contribute to more deaths. Nosce inimicum. Know the enemy. Thine enemy is willful blindness.