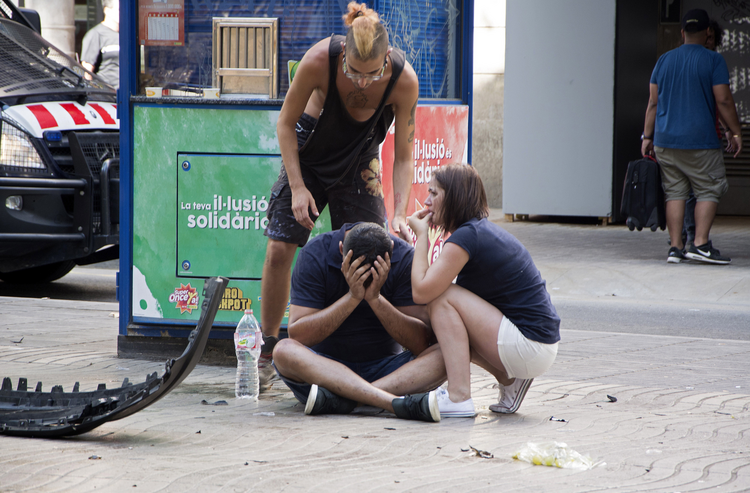 Injured people react after a van crashed into pedestrians in the Las Ramblas district of Barcelona, Spain, Aug. 17. Terrorists killed at least 12 and injured more than 50 others. (CNS photo/David Armengou, EPA)

Pope Francis has condemned “the blind violence” of “the cruel terrorist attack” in Barcelona on Aug. 17 and expressed his deep sorrow, condolences and prayers for the 13 persons that died in it. He assured the more than 100 people from at least 34 countries who were injured of his prayers and personal closeness. Fifteen of the injured are in critical condition.

He denounced the attack as “a grave offence against the Creator,” and prayed that God “may help us to continue working with determination for peace and harmony in the world.”

He told all this to Cardinal Juan José Omella, the archbishop of Barcelona, in a telegram sent on his behalf by the secretary of state, Cardinal Pietro Parolin, on Aug. 18.

Pope Francis denounced the attack as “a grave offence against the Creator.”

“In the face of this cruel terrorist attack that sowed death and pain in Barcelona’s La Rambla [district],” Pope Francis said he “wishes to express his deepest sorrow for the victims who have lost their lives in such an inhuman action, and he offers his prayers for their eternal rest.” At least 13 people died in the deadly attack yesterday afternoon, and another person died in a separate attack in Cambrils, a coastal town around 120 kilometers from Barcelona.

Turning to the more than 100 persons injured in yesterday’s attack, the pope said that “in these moments of sadness and pain” he “wishes to extend his support and closeness to the numerous people who have been injured, to their families and to the entire Catalan and Spanish society.”

The telegram said, “Pope Francis condemns once again the blind violence that is a grave offence to the Creator, and raises his prayer to God so that he may help us to continue working with determination for peace and harmony in the world.”

Pope Francis concluded his message “by invoking God’s blessing on all the victims, on their family members, and on the dear Spanish people.”

Pope Francis concluded his message “by invoking God’s blessing on all the victims, on their family members, and on the dear Spanish people.”

Last evening, the Vatican spokesman, Greg Burke, in a statement, spoke of the pope’s “great concern” at the deadly attack as well as his prayers for the dead and injured and his closeness to their families and the entire Spanish nation.

Vatican Radio reported that the Catholic bishops of Spain have also condemned the terrorist attack in Barcelona, calling it a “lamentable and detestable act.” In a statement released shortly after the attack, they strongly condemned terrorism, and offered prayers for the victims, and said:

Before this mournful and detestable act, the Spanish Bishops’ Conference wishes, first, to express its solidarity and prayer for all the victims and their families. We also convey our support for the whole of society under attack by these actions, in this case the citizens of Barcelona, as well as for the Security Forces.

The bishops condemned “every demonstration of terrorism” as “an intrinsically perverse practice, completely incompatible with a just, reasonable, and moral view of life.”

Terrorism, they said, “not only gravely infringes the right to life and liberty, but is also an example of the most terrible form of intolerance and totalitarianism.” They invited the faithful “to pray that God grant eternal rest” to the dead and “return the injured to health and grant consolation to their families.”

The Spanish bishops concluded their statement by praying that “these despicable actions may never be repeated.”

I wonder who did this and what their motivation was? The article says nothing about this.

The other article does mention who takes credit for it.

Barcelona is my favorite city in Europe and one of the fun cities in the world. This will be a hit to their tourist trade. Love the Ramblas and I can see how this could be so devastating. Always crowded at any time of year.

It seems that the same people who pontificate on Charlottesville have nothing much to say on Barcelona.

I am pleased to see the pope speak out! I am saddened to not hear Arab nations condemn those acts, at least not in our media. Perhaps they do not want to kick the hornets nest in their own backyard.

Offense against the Creator? Pope is hoping this holy war will just go away like fascists did in the thirties and forties. My bad, they didn't just go away, in fact, just the opposite occurred. For WWII and the creation of a stable postwar world, America does not get the credit it deserves from the Pope. Pope Francis needs to trust America, and leave real world issues to be dealt with those in the real world. Popes are the first to be fooled when the devil comes as an angel.