Pope Francis: assassinated French priest is a martyr and a blessed 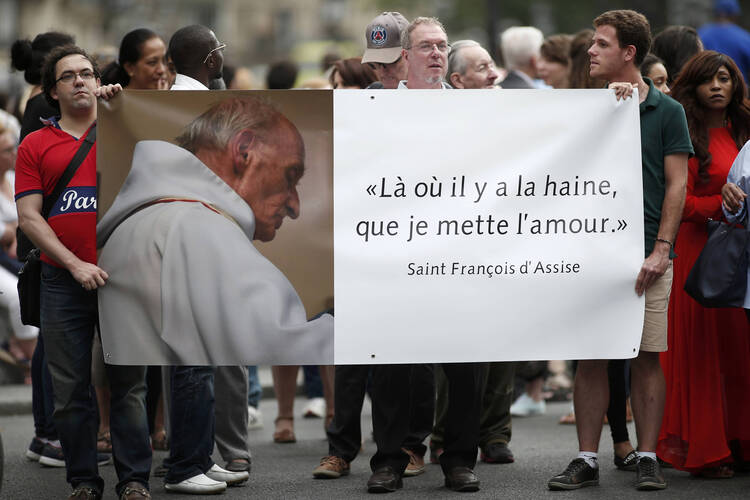 People hold a banner with a picture of French priest Father Jacques Hamel, which reads, "Where there is hatred, let me sow love," after a July 27 Mass at the Notre Dame Cathedral in Paris.

“To kill in the name of God is satanic,” Pope Francis said as he celebrated Mass in the Vatican this morning for Father Jacques Hamel, who was assassinated in his church in France on July 26 and whom today he hailed as “a martyr” and declared him “blessed.”

The French priest, then 85 years old, was murdered while celebrating Mass in his parish church in Saint-Etienne-du-Rouvray, outside the city of Rouen in France on July 26by two extremists, who swore allegiance to the so-called Islamic State, which later claimed responsibility for this criminal act. They slit his throat, and police later killed the attacker. The killing shocked people of all faiths in France, and the following Sunday many Muslims across the country attended Mass in Catholic churches as a sign of solidarity with Catholics and of their total rejection of this vile crime.

Pope Francis, in his homily, recalled that Jesus Christ was “the first martyr, the first who gave his life for us.”

The slain priest’s sister, Rosine, represented the family at the Mass. She traveled from France to be present today, as did the archbishop of Rouen, Dominique Lebrun, and 80 pilgrims from the diocese including many from Father Hamel’s parish. Francis met them individually afterwards. The nine cardinal advisors of the pope, including Sean O’Malley, O.F.M.Cap., were also present.

In his deeply moving homily, Francis recalled how the first Christians “paid with their lives” for their confession of Jesus Christ. They refused apostasy—to sacrifice to the gods of their time—and they were killed.

“This story is repeated to our day, too,” he added. “Today in the church there are more Christian martyrs than in the first times. Today, Christians are assassinated, tortured, imprisoned, their throats slit because they do or not deny Jesus Christ.”

Indeed, he said, “the Christians who suffer today—either in prison or with death or with torture—so as not to deny Jesus Christ, make visible the cruelty of this persecution. And this cruelty which demands apostasy—let’s use the word—is satanic.”

He then added, “How good it would be if all religious confessions would say: ‘To kill in the name of God is satanic.’”

He recalled that Father Jacques Hamel “had his throat cut on the cross, precisely when he was celebrating the sacrifice of the Cross of Christ.” He was “a good man, meek, brotherly, who always sought to make peace,” the pope said, “but he was assassinated as if he were a criminal.” He denounced this as “the satanic thread of persecution.”

Francis said he was particularly struck by one thing about his martyrdom, which Father Hamel accepted at the altar, “something that made me think a lot.” He said it was the fact that “in the midst of this difficult moment that he was living, in the midst also of this tragedy which he saw coming, he did not lose his lucidity to accuse and clearly say the name of his assassin, and he said clearly: ‘Go away Satan!’”

The pope said: “Father Hamel gave his life for us, he gave his life to not deny Jesus. He gave his life in the same sacrifice of Jesus on the altar, and from there he accused the author of the persecution: ‘Go away Satan!’”

He hailed the French priest’s example of courage and how through his martyrdom “he emptied himself to help others, to make brotherhood among men, to help all of us to go forward without fear.”

Pope Francis concluded his homily with these words: “May he from heaven—because we must pray to him, he is a martyr, and the martyrs are blessed, we must pray to him—give us meekness, brotherhood, peace and the courage to say the truth: to kill in the name of God is satanic.”

After concluding his homily, Francis turned to the archbishop of Rouen and told him: “You can expose the photo of Father Jacques in the church since he is blessed. And, if anyone questions this, you respond that the pope has authorized it!”

@gerryorome
Show Comments (
2
)
Comments are automatically closed two weeks after an article's initial publication. See our comments policy for more.
William Rydberg
5 years 9 months ago
That he was a Martyr was undoubted, but to be a canonized Martyr! Deo Gratias!
Bruce Snowden
5 years 9 months ago
Posting on Gerard O"Connell, 6/26/16 article on Fr. Jacques Hamel, I suggested the following offered here in brief excerpt, "Fr. Jacques Hamel was martyred because of his Faith in Christ ... he should be declared a martyr and a Saint." Very pleased Holy Father Francis agrees, naming him a Martyr and Blessed. Blessed Jacques Hamel pray for us! I hope as well that, the Holy Father will in time declare all who have died for the faith through terrorists killings present and future, Martyrs and Blesseds, including non-Catholics since all blood shed for Christ is sacred.