Why Pope Francis' appointment of the new archbishop of Milan is a big deal. 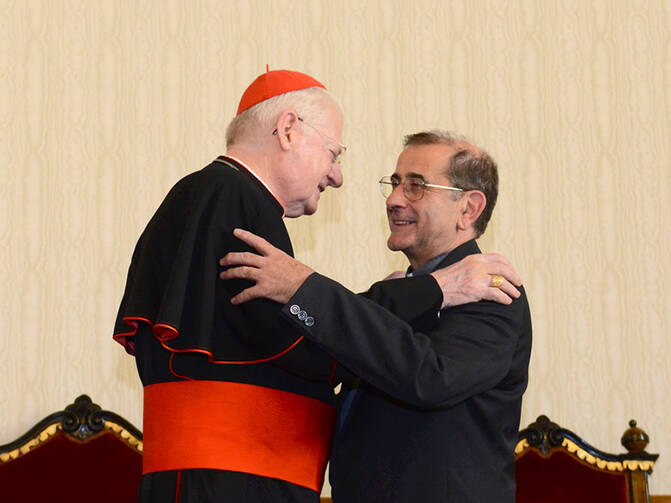 The Vatican announced on July 7 that Pope Francis had appointed Auxiliary Bishop Mario Delpini as the next archbishop of Milan, succeeding the retiring Cardinal Angelo Scola.

Bishop Delpini, a native of the archdiocese, lives in a very modest home mostly for retired priests about a mile northeast of the cathedral, with its old and venerable archbishop’s palace across the piazza. He is in close contact with the clergy of the archdiocese, where he has served most of his priestly life.

The archbishop of Milan leads a very large church with ancient traditions and heroes. Its sense of identity traces back to St. Ambrose, and he is referenced in everyday life. Here we find the “Ambrosian church,” with its Ambrosian rite and Ambrosian chant. The archbishop refers to his priests as “the Ambrosian clergy” (il clero ambrosiano). But beyond church one encounters the “Camisseria Ambrosiana” (Ambrosian Shirt Store); “Art Ambrosiana,” which sells jewelry, antiques and coins; or a “Cafeteria Ambrosiana.” The word is fairly equivalent to “Milanese.”

The Ambrosian rite is a Latin rite but different from the Roman rite, and it is in fact older.

The Ambrosian rite is a Latin rite but different from the Roman rite, and it is in fact older. One would recognize the rhythms of the Mass but also note some differences. There is no presentation of gifts or “Agnus Dei.” Lent begins on Sunday, with no Ash Wednesday, and Advent is six weeks long. And there is a very particular calendar of saints. Through the centuries Milan and eight surrounding suffragan dioceses have had to fight to keep their distinctive liturgy.

The archdiocese has a long history of strong bishops. St. Ambrose himself defied the emperor on one occasion and the empress on another. As the city through the centuries saw overlords come and go—from the Lombards to Germans to French to Spanish and on and on—the archbishop provided continuity. And the title “Archbishop of Milan” is so strong that Charles Borromeo, for example, would not dress in his cardinal’s robe unless he had to when he entered the Papal States. “Cardinal” is a Roman honorific; “Archbishop of Milan” really means something! In the liturgy today, an announcer commonly refers to “the Archbishop,” even if he is a cardinal.

This is the church that Mario Delpini is now called to lead. It is big, it is successful, it is alive. From the tenure of Carlo Maria Martini (1980–2002), it has shown a particular attention to youth. Soon after he became archbishop, Cardinal Martini used to sit on the steps of the cathedral and chat with young people. At one point he issued an invitation to those who did not go to church to write letters to him explaining what they needed that the church was not providing for them. The first time I saw him in Milan was in 2000 at a Palm Sunday Eve liturgy for the traditional handing over of the Creed for those who would be baptized the following Saturday at Easter Vigil. Thousands of young people stormed into the cathedral, sang and prayed, and later cheered him like a rock star. He was their hero. He believed in them. Subsequent archbishops have not quite been rock stars, but the enthusiasm of the young Catholics continues.

Holy Saturday in Milan: a time in between
Edward W. Schmidt, S.J.

Archbishop Delpini will bring his own style to the office, of course. He connects with people and he can laugh: Making some announcements at Holy Week services two years ago, he added a few bits of humor to the printed texts he was reading. And at the announcement of his appointment, he commented, “This moment is one of acute perception of my inadequacy for this ministry to which Pope Francis has called me.” And he went on: “This inadequacy appears even in my name; the archbishops of Milan have illustrious names—like Angelo, Dionigi, Carlo Maria, John, John Baptist—but Mario, what kind of name is that? You can see already that this is a very ordinary bishop.” He described himself as a “good man, a bit mediocre.”

By all accounts, he will be well received and his gifts will be a great resource for this great archdiocese. It is a massive job, an inspiring mission.

Edward W. Schmidt, S.J. is a senior editor at America.

Rather Christ Jesus, than any human, should be our hero.