Holy Saturday in Milan: a time in between 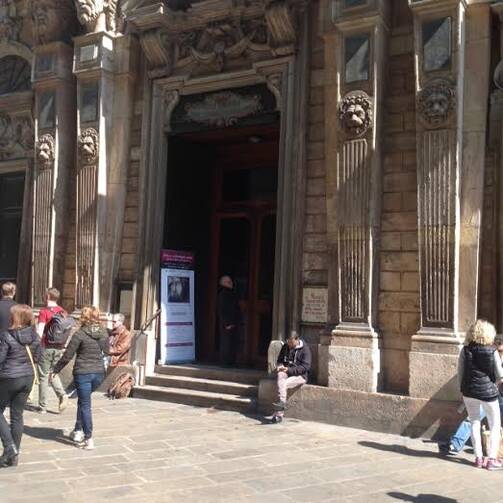 Good Friday was restless. The gospels tell of mobs and clamor, judgement and shouts of "crucify, crucify!" Then a painful struggling walk through narrow, crowded streets to the Skull, Golgatha, the place of death. When the agony of crucifixion was ended, a rush followed to bury the corpse before the sun set and the great sabbath began. It was finished.

The churches in Milan were quiet on Saturday, with one big exception, the Duomo, the cathedral. Here thousands of tourist visitors still buy their tickets to explore the monuments and graves and statuary with perhaps a rare turn to prayer; having to pay to tour the cathedral is new within the last year, and some resent it, but still they come. And apart from that, the crowds have now moved off to piazzas and pedestrian walkways. They jam the fashion district and line up at gelato counters.

Late in the morning, though, a tiny church just off the cathedral piazza holds a service to explore the Saturday silence. With a seating capacity of less 100, San Raffaele—the church was established in 903 and the present building consecrated by St. Charles Borromeo in 1582—hosts an "Ora della Madre" (an hour of the Mother) to let the faithful who fill its holy space reflect on the spirit of the silence proper to the day. A small group of talented singers enhance the readings and prayer that break the silence for a short while until we return to its power and its mystery.

This prayer service is in harmony with a pastoral letter of Milan's archbishop, Cardinal Carlo Maria Martini, during the holy year that ended in January 2001. Titled "La Madonna del Sabato Santo," this letter was about Holy Saturday as a time of deep silence. For the disciples it was a day of mourning for their beloved leader, whom they had deserted in his last hours. For Mary it was a time of faith and of hope, as she did not know what was to be but knew that God is faithful.

What comes to us this day? On Holy Saturday "in the disciples we recognize the confusion, and the fears that characterize our lives as believers." In Mary "we recognize our own waiting, our own hopes, the faith lived as a continual passage towards the mystery." (Quotes from Cardinal Martini's letter published as "Our Lady of Holy Saturday" by Ligouri Press, 2002.)

This holy Saturday, a time in between, is a gift of silence to rest with who we are and who we want to be or who we could be, what we do and what we are capable of doing. It is a gift of the chance to stop for a while, but always with the hope and the resolve to move on. Even if we cannot yet see it, new life awaits. It will be there tomorrow. Today's silence will bring us to tomorrow's joyful song.