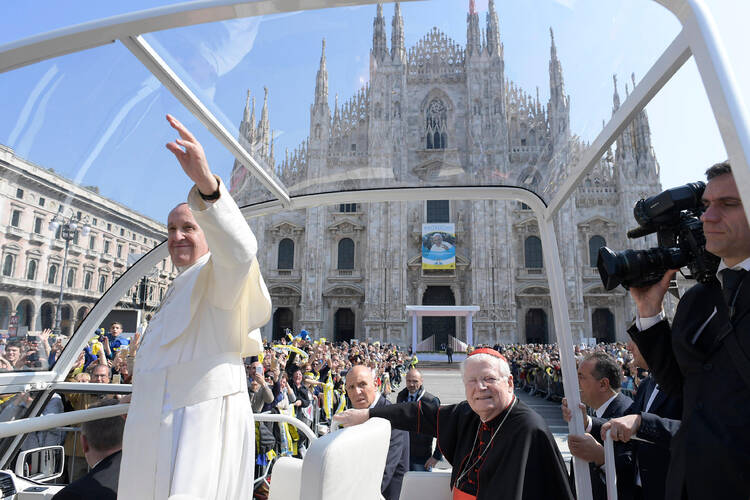 Pope Francis is accompanied by Cardinal Angelo Scola of Milan as he greets the crowd outside the cathedral in Milan March 25. (CNS photo/L'Osservatore Romano)

Pope Francis has accepted the resignation of Cardinal Angelo Scola as archbishop of Milan and appointed Bishop Mario Delpini, 66, a man of spartan habits who rides a bicycle and lives with elderly priests, as his successor.

The Vatican made the announcement on July 7, confirming rumors that had been circulating in the Italian media in recent days.

Cardinal Scola, the runner up to Francis in the 2013 conclave, handed in his resignation last November, on reaching the age of 75. He said then that he did not wish to continue as archbishop of Italy’s largest diocese—one of the biggest in the world with over 5 million Catholics.

The influential Italian cardinal has thrown his weight behind Francis and on various occasions warmly praised the Argentine pope’s leadership for energizing the church. He did so most recently when Pope Francis visited the Milan archdiocese on March 25.

After the papal visit, the cardinal asked to speed up the process for nominating his successor and requested that the appointment be made before summer. This was followed by consultations among priests of the archdiocese.

Those who know Bishop Delpini well describe him as “a very spiritual man, humble but not submissive, a great worker, far from the profile of a manager-bishop, very attentive to the personal relationship with priests.”

Bishop Delpini was vicar general of the archdiocese at the time of his appointment. According to Italian media and other sources, he is not only well known but also much liked by priests there.

Born in Gallarate, a city of 50,000 people in the Milan metropolitan area, in 1951, the new archbishop entered the diocesan seminary and was ordained in 1975 by Cardinal Giovanni Colombo. After graduating from the Catholic University of Milan, he obtained a degree in patristic sciences from the Augustinian Patristic Institute in Rome. He subsequently held different roles as a professor at the diocesan seminary in Venegono, head of the high school, and was appointed rector of the major seminary by Cardinal Carlo Maria Martini, S.J., a role he served in from 2000 to 2006.

Cardinal Dionigi Tettamanzi appointed him as one of the pastoral vicars in the archdiocese and ordained him auxiliary bishop after his nomination by Pope Benedict XVI in 2007. Cardinal Scola chose him as vicar-general in 2012 and two years later entrusted him with the permanent formation of the clergy.

For more than three decades, therefore, he has enjoyed the confidence of three successive archbishops of Milan—Martini, Tettamanzi and Scola—and has worked closely with each of them. From this perspective, Pope Francis’ choice of Delpini is seen by Vatican analysts as one of continuity.

At the same time, it is also being hailed as an original choice for several reasons. Bishop Delpini has spent all his priestly life in the archdiocese and does not belong to any group or faction among the 1,861 diocesan priests and 787 priests from religious orders working there (figures from Vatican Yearbook 2017). Moreover, it is the first time in over 50 years that a priest from the diocese has been named archbishop.

Andrea Tornielli, an Italian journalist who lives in Milan, writing in Vatican Insider, reports that those who know him well describe the new archbishop as “a very spiritual man, humble but not submissive, a great worker, far from the profile of a manager-bishop, very attentive to the personal relationship with priests.”

Up to now he has opted to live in a clergy house with elderly priests. He rides around the city on a bicycle, wearing a helmet and windbreaker jacket. He is not a user of social media, but speaks English and ancient Greek and has written two books. In the first, a pastoral guide, he urges priests to avoid clericalism.

He is known as a preacher who uses anecdotes and stories from real life, a quality which comes through in his second book, The Butterfly Flew Away, where he uses fairy tales to communicate the Gospel to children. His appointment by Pope Francis opens a new chapter in the life of the Milan archdiocese that has given so much to the Italian and universal church. Bishop Delpini is expected to be installed as Milan’s archbishop on Sept. 8.

I hope he is able to keep in close contact with his priests.

Too many Bishops have time for everyone but their priests.