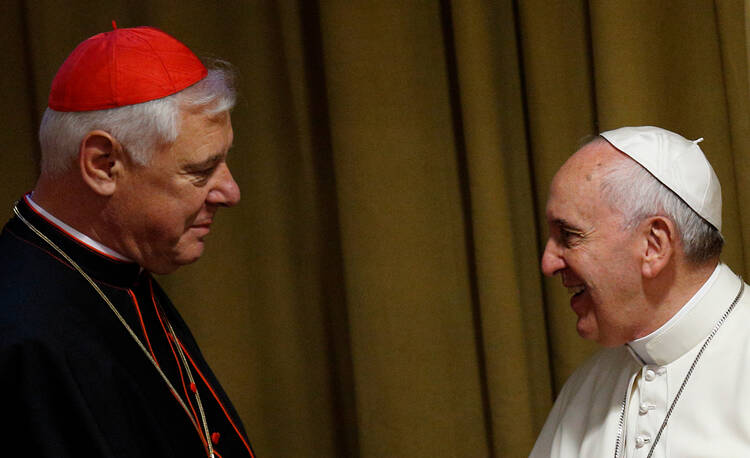 Pope Francis has appointed Archbishop Luis Ladaria Ferrer, a Spanish Jesuit, as the new prefect of the Congregation for the Doctrine of the Faith and successor to Cardinal Gerhard Müller, the Vatican announced at midday, July 1.

Pope Francis’ decision to nominate a new prefect of the C.D.F. is perhaps the most important appointment he has made to the Roman Curia after that of naming Cardinal Pietro Parolin as secretary of state.

It is destined to have far-reaching consequences, not the least of which is to ensure that the C.D.F. and its prefect are rowing with and not against the pope on key issues, including the interpretation of “Amoris Laetitia,” synodality and cooperation with the commission for the protection of minors.

At the time of his appointment, the 73-year old archbishop was Secretary of the C.D.F., that is, the number two position in the congregation. He was appointed to that role by Benedict XVI on July 9, 2008.

Today’s Vatican communique confirmed the story that had been widely circulated the previous afternoon and evening that Francis had not renewed the mandate of the German cardinal. It also announced that Archbishop Ladaria would succeed Cardinal Müller in his roles as the President of the Pontifical Commission “Ecclesia Dei,” the Pontifical Biblical Commission and the International Theological Commission.

America has learned that Pope Francis received Cardinal Müller in private audience in his library in the Vatican at noon on June 30 and informed him that he would not be reconfirmed as prefect when his five-year mandate, which was due to end on July 2, concluded. Informed sources told America that Francis offered him the possibility of re-assignment to another position in the Vatican after the summer holidays, but the German cardinal turned this down on the grounds that since he had been head of the “supreme” congregation (as the C.D.F. is called in Vatican parlance) it would be beneath his dignity to accept another post and so he preferred to go into retirement.

Sources told America that the Vatican was scheduled to announce the change at the head of the C.D.F. on Monday, July 3, but after the audience with the pope, Cardinal Müller returned to the C.D.F. and informed his colleagues that he was no longer head of the congregation. That news was quickly passed to media close to the cardinal and became public some hours later. For this reason, the Vatican decided to make the announcement at noon today.

In choosing Archbishop Ladaria to replace him, the pope has opted for a highly qualified theologian who shares his pastorally sensitive approach, having worked closely with him in these years, and has the ability to manage the C.D.F.

‘Amoris Laetitia’ represents an organic development of doctrine, ‘not a rupture.’
Gerard O’Connell

Update: Vatican to announce that Pope Francis has not reconfirmed Müller as head of C.D.F.
Gerard O’Connell

America has learned that a number of cardinals had asked Francis to remove Cardinal Müller from that post because he had on several occasions publicly disagreed with or distanced himself from the pope’s positions—in particular regarding “Amoris Laetitia”—and they felt this was undermining the papal office and magisterium.

In an interview on May 12 with EWTN’s Raymond Arroyo, Cardinal Müller reiterated his argument that Pope Francis’ post-synodal statement on the family does not open the door to receiving Communion for divorced and remarried Catholics. This came after bishops’ conferences in Germany, Argentina and Malta issued guidelines on “Amoris” that allow divorced and civilly remarried Catholics to receive the sacrament in certain situations.

“It is not good that the bishops’ conferences are making official interpretations of the pope,” Cardinal Müller said. “That is not Catholic. We have this document of the pope, and it must be read in the context of the complete Catholic tradition.”

While Pope Francis has signaled openness to an investigation into the role of women deacons in church history, establishing a commission (headed by Archbishop Ladaria) to study the issue, Cardinal Müller was firm in his opposition to the idea. “No. Impossible. It will not come.”

After Marie Collins, a sex abuse survivor who resigned her post on the Pontifical Commission for the Protection of Minors on March 1, cited what she described as resistance coming from some Vatican offices, in particular the C.D.F., against implementing recommendations, Cardinal Müller dismissed her claims. “I think this cliché must be put to an end: the idea that the pope, who wants the reform, is on one side and, on the other, a group of resisters who want to block it,” Cardinal Müller said.

Born at Manacor, on the Spanish island of Majorca, Archbishop Ladaria entered the Society of Jesus (the Jesuits) after graduating in law at the University of Madrid in 1966. He went on to study at the Comillas Pontifical University, Madrid, and Sankt Georgen Graduate school of philosophy and theology in Frankfurt am Main, Germany.

After his ordination to the priesthood in July 1973, Ladaria obtained a doctorate in theology at the Pontifical Gregorian University, Rome, in 1975 and went onto be a professor of dogmatic theology, first at the Comillas university, and then in 1984 at the Gregorian University, where he was vice-rector from 1986-1994.

St. John Paul II appointed him as a member of the International Theological Commission in 1992 and consultor of the C.D.F. in 1995. As secretary-general of the I.T.C., a post he held until 2009, he led its revision of the church’s understanding of limbo which concluded that children who die without baptism can enjoy the beatific vision in heaven.

Benedict XVI appointed him as secretary of the C.D.F. on July 9, 2008, and made him archbishop. He has served as consultor to the congregation for bishops and the pontifical council for the promotion of Christian unity, and has been involved in the dialogue with Saint Pius X Society. Last August, Pope Francis appointed him as president of the study commission on the women’s diaconate. At the C.D.F. he has also been involved in dealing with the abuse of minors by clergy.

The fact that considers serving the Lord at the Vatican to be beneath his dignity is very telling. Has he never read St. Thérèse of Lisieux?

Saying that it is beneath his dignity to serve in a lower position just about sums up the reasons why he needed to be replaced. We need servants not princes.

Please don't assume everything that is reported to be precise nor factual. The Pope has the right to select who works for him and we don't have the right to impugn his motives or Cardinal Müeller's motives for only God reads the human heart accurately.

So wise Pope Francis - intelligent and good - filled with the Spirit of Jesus!

Don't be deceived by Francis' good press, e.g. America Magazine. The Pope who says he wants dialogue is replacing everyone who disagrees with him. It is the Papal version of "My way or the highway." He wants to "reign" as an unopposed monarch, and the Jesuits are cheering him on.

Kevin,
I have to admit that I am somewhat disheartened to see the Pope, evidently, but I do not know all the secrets of the Vatican,
removing anyone who disagrees with him.
Nothing is more dangerous to people in power to be surrounded by "Yes" men.
The Pope is not the Church and the Church is not the Pope.
Having someone who may say otherwise to want you want is healthy.
Had Francis turned out to be an Archconservative and summarily dismissed Fr. Martin S.J. from the Society,
told the Jesuits to wear their clerics whenever they are out in public and told them to live actual lives of
poverty and so forth, they storm against his oppressions would fill every issue of America, until this "Repressive Pope"
ordered the Jesuits to stop publishing it.

It will be interesting to see how the CDF under Archbishop Laderia handles Amoris Laetitia (AL). Under Cardinal Mueller the CDF never issued any formal guidelines on Holy Communion for the divorced and remarried without an annulment, per AL. Of course, no one expected this as it would likely have resulted in a formal schism between the CDF and the Papacy.

Clearly, a dichotomy exists among worldwide Bishops and the 4 Cardinals (who have asked for an audience with Pope Francis) do have a point here. While we can argue about whether the 4 Cardinals truly understand the difference between the letter of the law and the spirit of the law, et al, I expect the CDF will have a more active role under Laderia in support of the vision of Pope Francis.

Dear Roberto Bacalski,
I understand; at first I thought that was an odd comment too, about a different position being beneath his dignity, then I re-read the article and noticed that it wasn't an actual QUOTE.
It's just that "Informed sources (who weren't named) told America that...)" So, I won't judge Cardinal Muller, and I suppose we can all agree to pray for both of them.

Ding dong the witch is dead. Dont let the door hit you on your way out, Muller.

I have been hearing about "schism" since the 1970s post Pope Paul VI, and yet they never leave. The "schismatics" wont leave for the simple reason that their bishop(s) and priest(s) salary would depend on the tithe of the schismatic followers. A cursory look at some of their blogs,
written in broken English and full throttle ad hominem under the guise of bogus avatars tells us what we have known for decades. The unhinged rorate-caeli blog, Fr. John Zuhlsdorf blog, Edward Pentin at NC Register, novusordowatch and lifesitenews consistently show readers that, many as anonymous bloggers, they relish pointing guns and hanging a noose for Pope Francis all the while annointing themselves as "True Catholics". So did Savonarola.

There will be no schism. Can you imagine Raymond Clarke living without her cappa magna and splendid silk train? They're all about money, attention seeking behavior, pride and clericalism. They cant support themselves financially nor over the long haul.

Pope Francis walks the talk, The Tridentine Mass groupies with their Savonarola prophecies and dire predictions have run their course.

Since Archbishop Ladaria has been in charge of the commission about women deacons, wonder what will happen next in this chronology:

We should not have false hopes for the priestly ordination of women in the near future, but perhaps it will happen during this millennium. Since there is no dogmatic impediment, let us pray that the Holy Spirit can overcome resistance to change.

a) Does anyone really know what Amoris Laetitia proposes ?

b) Though it says right at the top of the Comment section to be charitable
and stay on topic:

Roberto Bacalski, Robert Killoren, attack Cardinal Mueller for
something we don't even know he said.

Wanda Rey attacks anyone who disagrees with her interpretation
of the Spirit of Vatican Two.

Should not those three commentators have been contacted by
whomever it is that edits the Comment Sections for America
and asked to re-write or remove the calumnious statements ?

c) And of course Luiz Gutierrez never misses an opportunity to remind
us that the Holy Spirit wants Female Priests, the sooner the better.

This story and many comments comprise a most uncharitable treatment of Cardinal Muller. "Informed sources?" Really?