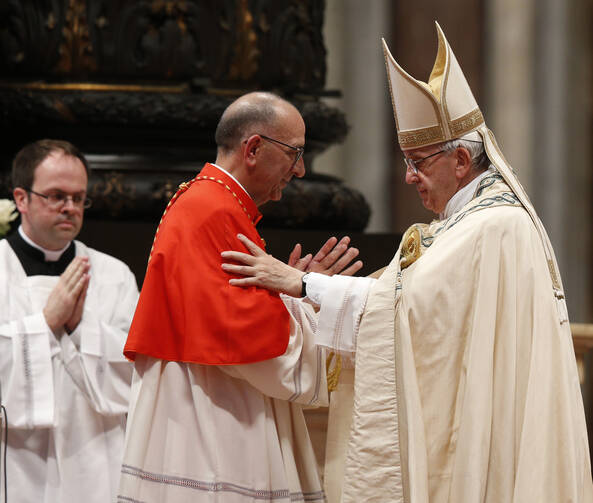 Pope Francis told the five new cardinals he created today that Jesus “has not called you to become ‘princes’ in the church” but “to serve like him and with him” and “to face as he did the sin of the world and its effects on today’s humanity.”

At the consistory on Wednesday, June 28, in St. Peter’s Basilica, the pope instructed the new cardinals to not allow themselves “to be distracted by other interests or prospects” but to face reality as Jesus sees it. That reality is the cross, he said. “It is the sin of the world that he came to take upon himself and to uproot it from the world of men and women.”

Pope Francis told the new cardinals that Jesus “has not called you to become ‘princes’ in the church” but “to serve like him and with him.”

Francis explained that this reality exists in “the innocent who suffer and die as victims of war and terrorism” and in “the forms of enslavement that continue to violate human dignity even in the age of human rights.” It is to be found also in “the refugee camps, which at times seem more like a hell than a purgatory,” and in “the systematic discarding of all that is no longer useful, people included.”

The pope called on them to face the reality of sin and evil in the world as Jesus did when he walked to the cross. He reminded them that during his public ministry, Jesus “made known the Father’s tender love by healing all who were oppressed by the evil one,” and in Jerusalem “he realizes that the moment has come to press on to the very end, to eliminate evil at its root. And so, he walks resolutely towards the cross.” 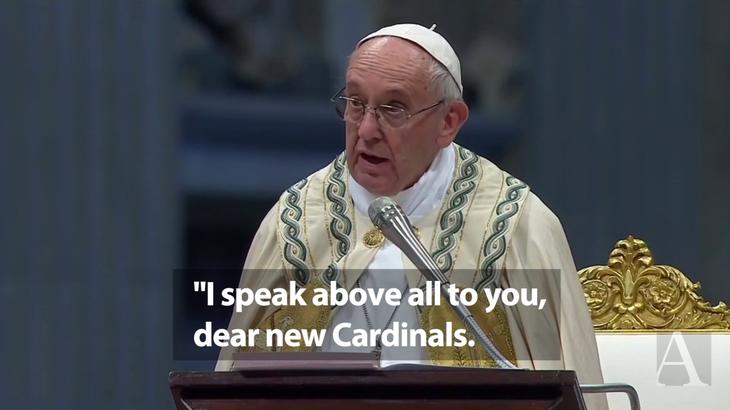 Pope Francis called the five new cardinals—from Mali, Spain, Sweden, Laos and El Salvador—“to follow Jesus and walk ahead of the holy people of God, with your gaze fixed on the Lord’s cross and resurrection.”

The pope called on them to face the reality of sin and evil in the world as Jesus did.

When he finished his homily, he gave each of the new cardinals a red hat, a ring and the title to a church in Rome. Each cardinal is now also a pastor of the Diocese of Rome, serving alongside the bishop of Rome and successor of St. Peter.

He gave the red hat first to the 74-year-old Archbishop Jean Zerbo of Bamako, in Mali, who has been ill and last week was not expected to attend today’s ceremony. He comes from a small Catholic community in a country of 14.5 million people, some 90 percent of whom are Muslim and half of whom live below the poverty level. There has been conflict in recent years in which the new cardinal played a strong role as an advocate for peace.

After Archbishop Zerbo’s nomination as cardinal on May 21, however, news media in France and elsewhere accused him and other bishops in Mali of depositing more than $13.5 million in Swiss banks. The bishops claimed the financial arrangement had been made in a proper way and for good purposes. Vatican sources told America that the Holy See has been able to confirm this.

Archbishop Juan Jose Omella of Barcelona is close to the poor and a pastor very much in the style of the pope.

Pope Francis gave the second red hat to the Archbishop Juan Jose Omella of Barcelona, 71, who is close to the poor and a pastor very much in the style of the pope. The pope appointed him to the Congregation of Bishops as part of his effort to give new direction to the Spanish church.

The third red hat went to the Bishop Anders Arborelius of Stockholm, 68, a convert to Catholicism and member of the Discalced Carmelite order. He is the first-ever Swedish cardinal and leads a tiny Catholic community in this secularized country.

The pope assigned the next red hat to Bishop Louis-Marie Ling Mangkhanekhoun, 73, the apostolic vicar of Pakse, in Laos. Francis met him in the Vatican some months ago and learned that he is a leader of the tiny Catholic community in Laos that produced a number of martyrs in the last century. By making him a cardinal, the Argentine pope is honoring a martyred church on the periphery of the world.

When Bishop Rosa Chavez first learned that the pope had named him to be cardinal, he said, “This is for Archbishop Romero.”

Pope Francis gave the last red hat to an El Salvadorian prelate who is known for his total dedication to the poor, Gregorio Rosa Chavez, auxiliary bishop of the Archdiocese of San Salvador. In doing so, Francis honored the memory of the blessed Óscar Romero, the martyred archbishop, with whom the new cardinal was extremely close. When he first learned that the pope had named him to be cardinal, Bishop Rosa Chavez said, “This is for Archbishop Romero.” By making him a cardinal, Francis also wanted to honor the Catholic Church that has suffered so much in El Salvador.

Before the cardinals received the red hat, they took an oath of obedience to the pope and made a profession of faith. According to tradition, the first cardinal on the list, Archbishop Zerbo, should have led them in these solemn acts, but because of his weak health the Spanish prelate, Archbishop Omella, replaced him in this role.

After the ceremony, Pope Francis took the five new cardinals to visit Pope-emeritus Benedict XVI at his residence inside the Vatican.

Today’s consistory was the fourth held by Francis since his election as pope on March 13, 2013. By creating these five new cardinals he has brought the total number of electors in the College of Cardinals to 121. Of these 121 cardinals under the age of 80 who have the right to vote in a conclave to elect his successor, Pope Francis has created 49.

The 121 electors include 53 Europeans, 17 North Americans (including four from Mexico, 10 from the United States and three from Canada), 17 Central and South Americans, 15 Asians, 15 Africans and four from Oceania. The European electors no longer have the majority that they enjoyed in past conclaves—one of the major changes brought about by the first pope from the southern hemisphere.