Attending church is good for your health. Now what? 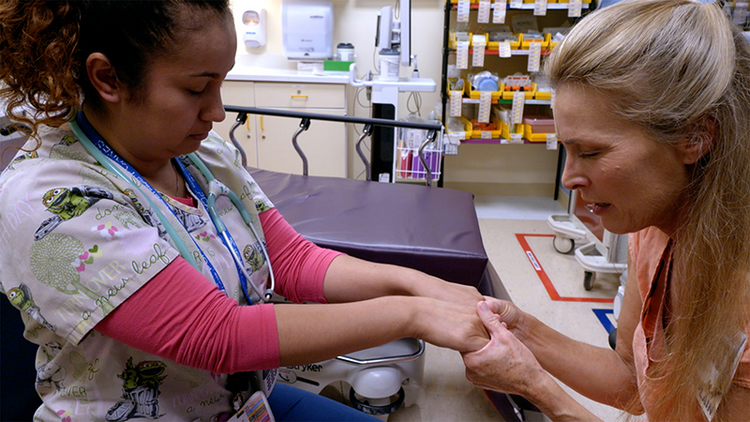 A chaplain prays with a nurse in a scene from the documentary “Your Health: A Sacred Matter,” which airs on several PBS stations Friday and Saturday July 7 and 8. Photo courtesy of Auteur Productions

(RNS) The latest in a long line of studies, now numbering in the hundreds, if not thousands, shows that church attendance is good for your health.

Published in May by researchers from Vanderbilt University, the study found that middle-aged adults who attended religious services at least once in the past year were half as likely to die prematurely as those who didn’t.

Using data from a National Health and Nutrition Examination Survey collected by the Centers for Disease Control and Prevention, the study’s researchers examined 10 biological stress markers among 5,449 men and women aged 46 to 65. They then compared those markers with respondents' self-reported religious service attendance and found a correlation between religious service attendance, lower stress and longevity.

Researchers from Vanderbilt University, the study found that middle-aged adults who attended religious services at least once in the past year were half as likely to die prematurely as those who didn’t.

The study adds to mounting scientific findings on the subject. A far larger study, of 74,534 women, published last year found that attending a religious service more than once per week was associated with 33 percent lower mortality compared with women who never attended religious services.

A documentary probing recent findings similar to these airs on on many PBS stations Friday and Saturday (July 7 and 8) — another sign of growing awareness of these studies' significance, especially for older adults.

But even as the studies pile up and the literature appears close to conclusive, many questions about the association between religious service attendance and health have yet to be answered.

For one, people attend religious services for all kinds of reasons. What is it about services that might impart better health? The prayers? The social connections? The coffee and cookies?

And does religious attendance account for longevity, or something else? Could it be that people who attend church, synagogue or mosque happen to lead healthier lifestyles? Maybe they are on the whole predisposed to eat well, exercise regularly, engage in safe sex and drink alcohol in moderation?

How about people who bond over shared interests—say, knitting or poker, or devoted volunteers in literacy centers, or animal rescues? Has anyone studied whether these group members have lower mortality rates?

And finally, if, as so much evidence suggests, religious attendance is correlated with positive health outcomes, does that mean doctors should prescribe a weekly service to their patients?

“Religion is incredibly complex,” said Neal Krause, a retired professor of public health at the University of Michigan who is the lead investigator in a Landmark Spirituality and Health Survey. “To say ‘Church attendance is good for your health’ does everything and nothing at the same time. The question is, ‘What exactly is going on here?’"

Krause points out that not all religion is good. Religious devotion can also lead to negative health outcomes if people are motivated to attend church out of guilt, for example, or feel God is punishing them through their illness.  Indeed, studies have shown that negative religious coping can cause spiritual distress that may lead to depression or early death.

But overall, researchers say the field of spirituality and health — spanning numerous academic disciplines, including public health, nursing, social work, sociology, psychology and medicine — is improving as investigators dig deeper and try to ferret out causal relationships and eliminate other factors that may account for improved health outcomes.

One thing many researchers agree on: Studies analyzing whether prayer can heal illness have been shown to be methodologically, ethically and theologically flawed. Besides the question of whether prayer is an appropriate subject for scientific study and the fact that it’s impossible to quantify the amount of prayer offered at a set time, there were a host of ethical considerations (Is it ethical not to pray for someone, and does God heal some but not others?).

The best of these studies showed that prayers offered by strangers—sometimes called intercessory prayer—had no effect on the recovery of people undergoing surgery.

Religious attendance, however, is a subject researchers keep returning to. The question remains: What practical implications can be gleaned from these studies?

“Physicians should know everything that has the potential to impact a patient’s well-being, whether it's diet, social engagement, gun ownership or texting while driving,” said Richard Sloan, a biomedical researcher at Columbia University Medical Center. “My objection is when physicians try to persuade patients to engage in religious practices that are potentially coercive.”

For example, he said, it would unethical for a doctor to try to convert patients to a particular faith or to initiate prayer with a patient.

Likewise, it’s not clear that going to church to improve the odds of survival is a good idea.

“I wouldn’t want a congregation of people there for health benefits,” said Daniel Sulmasy, a general internist and ethicist at Georgetown University and a former Franciscan friar. “In fact, we don’t know if people did it for that reason, rather than intrinsic reasons, that there would be a correlation.”

But some studies at the intersection of religion and health that might help clinicians do a better job of caring for patients.

For example, studies have shown that chaplain visits in hospital settings are associated with better health outcomes. This stands to reason, say researchers; when patients’ spiritual needs are met, they are more satisfied with their overall care. Another study suggested patients that take advantage of chaplain visits are more peaceful and feel more in control of their health.

Why is the A.C.L.U. targeting Catholic hospitals?
Stephanie Slade

More such research examining the efficacy of chaplaincy interventions are needed, said Christina Puchalski, professor of medicine and director of the George Washington University's Institute for Spirituality and Health.

“What can we do for the person that’s suffering?” Puchalski asked. “What are we doing so they aren’t alone? I try to accompany people in their suffering. That’s where we can all come together.”

And while researchers work to tease out the mediating factors in religious services that may hold the secret ingredient to health, there’s little question that religious groups have a lot going for them.

“Name a human institution that gives you a sense of community, hope, teaches you how to meditate, has all these kinds of disciplines associated with it,” said Sulmasy. “If it’s not a religion, it’s going to be close to a religion.”

"Holiness" is about becoming whole, healed, at peace. A body is more than a biochemical machine to be tinkered with using pills, exercise, and surgery. Tending to one's spiritual life will be helpful to physical health, possibly because those who have learned to accept themselves, if not love themselves, will take better care of their bodies. And realizing that much of life cannot be controlled but only coped with reduces stress.

Part of my spiel on quitting smoking is to offer smokers the thought, "Ask yourself why you are doing something so self-destructive every time you light a cigarette." I know this is helpful because it prompted me to quit smoking and I have had other smokers tell me that they took up smoking at a low point in their lives. I also point out that people smoke for emotional reasons and they will quit for emotional reasons. Logical arguments against smoking are not all that effective. Smoking is just one example of how caring (or not caring) for the interior self can be manifested in a way that affects physical health.