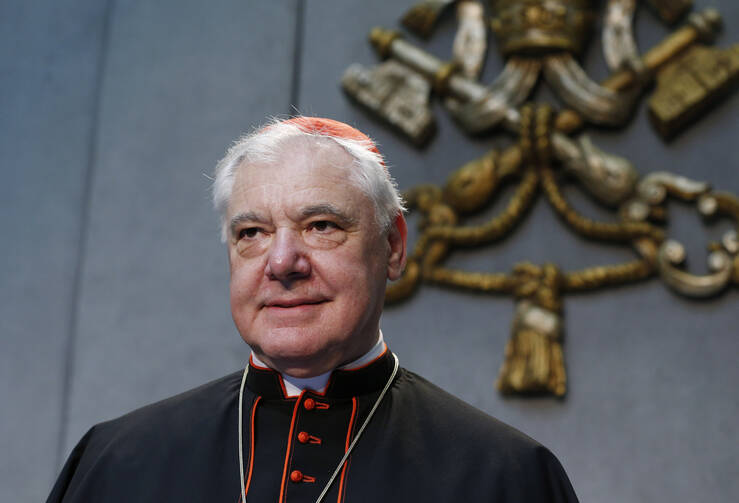 Cardinal Gerhard Muller, prefect of the Congregation for the Doctrine of the Faith, arrives for a news conference at the Vatican in this June 14, 2016, file photo. (CNS photo/Paul Haring)

The Vatican's doctrinal chief dismissed accusations that some Vatican officials are resisting recommendations on best practices for protecting children and vulnerable adults from clergy sex abuse.

"I think this cliche must be put to an end: the idea that the pope, who wants the reform, is on one side and, on the other, a group of resisters who want to block it," said Cardinal Gerhard Muller, prefect of the Congregation for the Doctrine of the Faith.

The congregation is charged with carrying out canonical trials and seeking justice for victims of clerical abuse, while local bishops and heads of religious orders must care for their pastoral needs, he said in an interview with the Italian newspaper Corriere della Sera, published on March 5.

Cardinal Muller responded to complaints made by Marie Collins, who resigned her post on the Pontifical Commission for the Protection of Minors on March 1, citing what she described as resistance coming from Vatican offices against implementing recommendations.

In an editorial published online on March 1 by National Catholic Reporter, Collins said an unnamed dicastery not only refused to cooperate on the commission's safeguarding guidelines, but also refused to respond to letters from victims.

Collins said the refusal "to implement one of the simplest recommendations the commission has put forward to date" was the last straw that led to her resignation.

While acknowledging that personal care of victims is important, Cardinal Muller said Collins' accusations "are based on a misunderstanding" and that bishops and religious superiors "who are closer" to victims of clergy sex abuse are charged with their pastoral care.

"When a letter arrives, we always ask the bishop that he take pastoral care of the victim, clarifying that the congregation will do everything possible to do justice. It is a misunderstanding that this dicastery, in Rome," can be aware of everything happening in all the dioceses and religious orders in the world, the cardinal said.

The Congregation for the Doctrine of the Faith, he added, "acts as the supreme apostolic tribunal" on matters dealing with clerical abuse.

"All of our collaborators humanly suffer with the victims of abuse. Our task is to do everything possible to do justice and avoid further crimes," he said.

Through the work of the Pontifical Commission for the Protection of Minors, the cardinal said, Pope Francis "wished to offer an exemplary service" as a help for the church and the world in dealing with the scourge of child sex abuse.

"Pedophilia is monstrous crime as well as a grave sin. We must remember Jesus' words to the children and his condemnation against those who harm them," Cardinal Muller said.