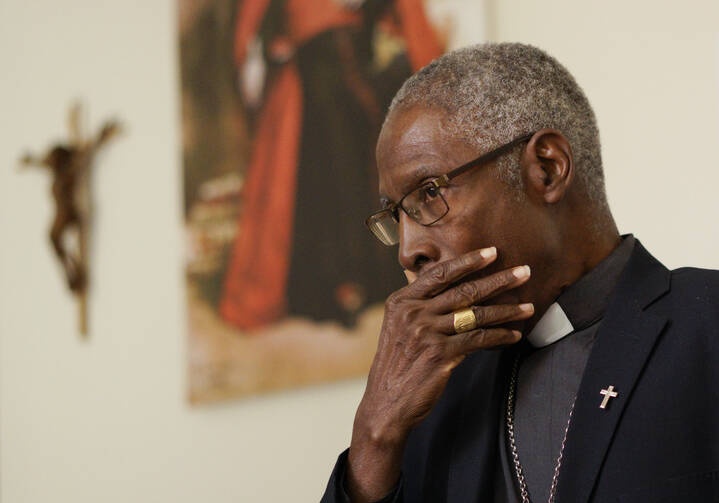 Mali bishop Jean-Gabriel Diarra listens to question during an interview with The Associated Press in Rome on Tuesday, June 27, 2017.  (AP Photo/Andrew Medichini)

An ailing Mali archbishop facing allegations of financial impropriety assured the Vatican on Tuesday he plans to show up at St. Peter's Basilica to be made a cardinal by Pope Francis.

Vatican spokesman Greg Burke said Bamako Archbishop Jean Zerbo "has confirmed his presence" at the Wednesday ceremony where Zerbo and four other churchmen will be elevated to cardinal's rank.

European media have speculated that Francis might not make Zerbo cardinal following reports that he and two other Mali bishops had opened Swiss bank accounts totaling 12 million euros ($13.5 million.)

Citing poor health, Zerbo canceled an interview with The Associated Press in Rome Tuesday. Zerbo, 73, arrived in Rome on Saturday from Paris, where he had undergone medical checks following intestinal surgery some time ago in Mali, according to aides.

Another Mali bishop who reportedly was one of the alleged bank account-holders, Jean-Gabriel Diarra, declined to explain the money's origins. In an interview at the same missionaries' residence in Rome near the Vatican where Zerbo was being hosted, Diarra declared: "We have nothing to hide."

"People say that we have hidden the money of the faithful in Switzerland," said Diarra, who heads the San diocese in Mali, one of Africa's most impoverished nations.

"We can give an explanation for this, but for the moment we cannot talk about it to the press before explaining it to those who are entitled," he said.

The Vatican has not commented publicly on the reports in French daily Le Monde and other lay and religious publications that Zerbo, Diarra and another Mali prelate opened the Swiss accounts starting in 2002.

The reports were published in late May, shortly after the pope announced that Zerbo would become a cardinal.

"It's true that it's a scandal, but when we give the explanations you will indeed see if yes, we, the Church of Mali, stole the money or not, put the money of the poor in a bank or not, and why it was done with this money," Diarra said.

"Someone will tell you all that -- is it (the money) for me? Is it for Zerbo? Someone will say all that, but they will tell it to the authorities, not you, the press here,' the bishop said.

Diarra, who said he has known Zerbo since they were seminarians together, said the money came from Catholic faithful. He declined to reveal for what purposes the money might have been designated or used.

The scandal risks eclipsing some of Archbishop Zerbo's accomplishments that surely caught the eye of Pope Francis.

Muslims constitute the predominant religious majority in Mali while Christians, most of them Catholics, are a tiny minority.

In a country bloodied by Islamist extremism, Zerbo distinguished himself as a churchman working for social reconciliation—one of the pontiff's priorities. As Bamako's archbishop since 1998, he has played a role in peace negotiations.

Vatican officials, without commenting on the propriety of the Swiss accounts allegedly held by the Mali bishops, noted that it is common for the Catholic church institutions in unstable African nations to keep their funds in European banks. While many have accounts with the Vatican's own bank, they are not required to do so, the officials stressed.

Mali's president has lent his support to Zerbo. Analysts in Mali say there has been little political will to pursue a possible criminal investigation.

The law concerning foreign transfers of money is also murky. While permissible by foreign companies operating in Mali, it is unclear how that would apply to church funds.

In Mali, there were mixed sentiments about the scandal swirling about the man who was chosen to be the country's first cardinal.

"I met Zerbo a few years ago in Mopti," said Philippe Omore, a Catholic who is president of the Christian community in the northern town of Gao.

"He seemed loyal and sincere, but anything is possible in life. Ever since we heard this news, we pray every day to have all the truth about this story," Omore told the AP in Mali.

Echoing Pope Francis' insistence that the church must clean up its own moral house first before preaching morality to others, Omore added, "If we really follow Christ, we must stop the financial scandals."