Want to keep your homilies fresh? Take a page from Louis C. K. 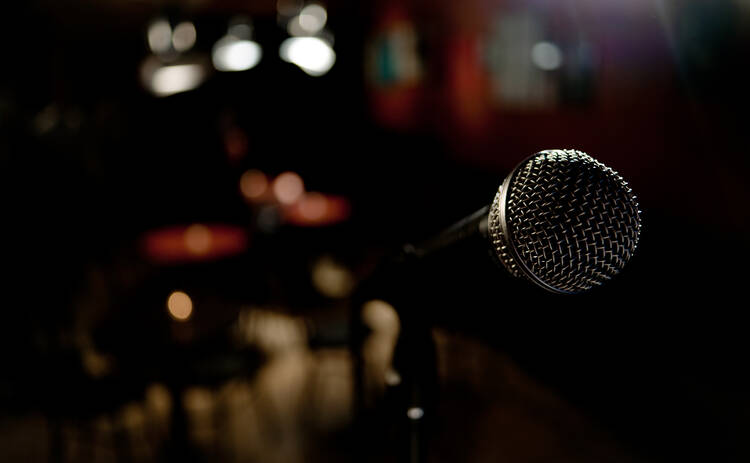 Sometimes at the start of a homily I like to mention things I was taught not to do, lessons learned at the feet of great liturgists like Peter Fink, S.J., Tom Kane, C.S.P., and John Baldovin, S.J., at the former Weston Jesuit School of Theology and through the example of many women and men who have been my teachers and friends.

For instance, in school we were taught to never preach in the second person. It almost always sets a finger-wagging, “you people” kind of tone; it also separates you from the congregation in a way that is neither helpful nor accurate. Any challenge the Gospel holds for the congregation, it holds for you as well.

Any challenge the Gospel holds for the congregation, it holds for priests as well.

As a Jesuit, I have also learned to never preach about a recent medical procedure. When you live in a community of men of varying ages such topics can seem normal, but no one comes to Mass hoping to hear about your prostate.

The criticism I have heard most, though, is that many priests have three basic homilies they keep repeating. Not every priest but many—you know, “those priests” over there, the not very good ones who roll out of bed 20 minutes before Mass and just wing it. Like the older guy I lived with who preached for 30 minutes at a weekday Mass and confided afterward: “I used to prepare, but I’ve decided I’m just going to trust the Spirit.” (We housemates wanted to point out that “length” is not one of the Spirit’s gifts.)

Not long ago I was kidding about this “three homilies” business at a Sunday Mass. Afterward, a parishioner came up to me, took me by the hand, looked me in the eye and said emphatically, “Father, I know exactly what you mean.”

I’ve only been a priest for 13 years. How could I possibly be at the point that I am just recycling ideas?

And I thought: Wait a second, he sounds like he is talking about me. That’s ridiculous; I’ve only been a priest for 13 years. How could I possibly be at the point that I am just recycling ideas?

I admit at times my homilies do find their way back to somewhat familiar terrain. But hey, I don’t pick the readings. The Word of God is the Word of God.

Yes, occasionally I have also wondered whether I’ve used this or that anecdote before. No, I cannot be absolutely certain, but I am usually at least 60 percent positive I haven’t. A good story has no “use by” date, right? We have been performing Shakespeare’s plays for centuries, and I don’t hear anyone complaining (well, other than that recent one in Central Park, but that’s a whole other thing...).

If I want to, I can keep rolling out the same over-polished nuggets of wisdom forever and most likely no one will even say anything.

But this parishioner’s comment surfaced other things I have found troubling. For instance, while the priesthood is considered comparable to professions like the law, medicine or education, it has none of the requirements of ongoing education and recertification that those professions do. Other than in the areas of maintaining healthy boundaries and child safety, I never have to undertake any further training, let alone seek feedback on my preaching or confessional style. If I want to, I can keep rolling out the same over-polished nuggets of wisdom forever and most likely no one will even say anything.

Interviews with comedians have also unsettled me. Obviously being a priest is a lot more serious than cracking wise. But when it comes to preaching, the professions have similarities; we’re both trying to break open truths in a way that resonates with people’s experience.

Am I just searching for a comfy groove I can lead the Scripture to? Or am I letting the Word surprise me?

It turns out most of the best stand-ups eventually throw out their old material. Louis C.K. produces a fresh 60-minute set annually. If that is the practice for folks telling jokes, shouldn’t some version of it be at least as true for me?

The Word of God is the Word of God and some messages are good to hear again and again. Like how we are sinners loved by God; no need to retread that wisdom.

Preaching in a Vacuum: Why routine feedback on the Sunday homily is essential
Chris Chatteris

Preaching is definitely not as easy as it appears from the pews. Sometimes the homilies you spend all your time on completely bomb, while others you break at the last minute hit hard. And often you do not know which you have got until you are out there saying it.

But when I am preparing to preach, am I just searching for a comfy groove I can lead the Scripture to? Or am I letting the Word speak to me and surprise me?

What would happen if I did a full Louis C.K., threw out all my favorite stories and standard homilies, maybe even retired this “things I learned at seminary” bit? (Though I have to say, it kills.)

The idea terrifies me. If I put all my bells and whistles aside, what would be left besides Jesus and me and a blank page.

"Jesus and me and a blank page" misses the entire point of liturgical homilies. Louis C. K. would surely tell you that comedy is about reaching the audience where it lives. What you have described is a good concept for personal meditation, but that is not at all what a homily is about. Every time the Lectionary presents a familiar text, the people and the times are likely to be different. Remember that the basic purpose of the Liturgy is to build up Christians through communal experience for the difficult task of living in a world which does not value loving one's neighbor as oneself. Read the daily paper, especially the letters to the editor, and a wide social media feed to understand what concerns people in the present. Give up that academic tendency to teach, generalize, define and proceed to apply each day's Scripture to the struggles of each congregation. The very word "preach" gives the wrong orientation of one to many. Sharing how Scripture applies to the parking lot, the roads, shopping, working, voting is the much more difficult task because it often reveals the conflicts we tend to compartmentalize. If the homilist is repetitive, then it is likely that the needs and concerns of the congregation are not being considered instead of theology or orthodoxy.