Preaching in a Vacuum: Why routine feedback on the Sunday homily is essential 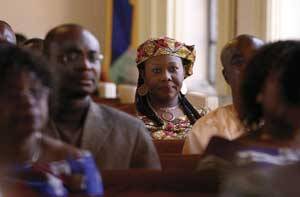 I'm tired of being made to feel like an idiot.” That is the reason a woman friend of Clifford Longley, a correspondent for The London Tablet, gave for no longer attending Mass. One hears variations of this sentiment with such regularity among thoughtful Catholics that one is tempted to coin a new beatitude: Blessed are those who persevere. Or perhaps it should be: Blessed are those courageous enough to give frank feedback on the preaching at Mass.

I can think of no greater service to the pastoral practice of the church than constructive criticism of preaching. If such a movement were to take hold among the people of God, there would be nowhere to hide for the unprepared, the hollow and the offensive. Preachers who "talk down” to the congregation might suffer the fate of a priest I heard of who gave a scathing critique of a play at a local theater that portrayed a religious brother reminiscing rather bitterly on the vicissitudes of his life in a teaching order. The homilist was just hitting his critical stride when a man in the congregation put up his hand and introduced himself as the actor who played the role of the said brother. He then asked the priest very politely whether he had actually seen the play. The shamefaced but honest reply was that he had only read the reviews.

The anecdote (a true story apparently) illustrates the importance of homework, professionalism and respect for the intelligence of the congregation. It also illustrates the effectiveness of straightforward and trenchant feedback, as opposed to the conventional and mostly meaningless, "Nice homily, Father.”

Feedback can take as many forms as there are cultures in the church. In some parts of Africa, for example, instantaneous feedback is a cultural feature of public speaking, including preaching. I like the story about the pastor whose sermon was limping along on a bad day when someone shouted, "Help him, Lord! Help him!” Where I live in South Africa, if someone gets up after Mass to make an announcement and goes on for too long, perhaps commenting on the goings-on in the parish, someone might well break in by leading the congregation in song to signal that it is time to stop talking and sit down. This does not typically happen to the clergy during their homilies, but South Africans must sometimes be sorely tempted.

Of course, audience participation in South African culture is not simply about cutting speakers short much of it is about encouragement. Just as the parishioner who shouts "Help him, Lord!” is, barring the possibility of a heavy, undermining irony, genuinely trying to encourage the preacher with a reminder of the availability of divine assistance, so it is with another black South African custom. A congregation may sing something rousing as a speaker gets up to speak and composes himself or herself such singing indicates the basic encouraging stance of the community. Its warm assurance beats the glacial, analytical stillness that a speaker must brave when stepping up to podium or pulpit before many a Western audience or congregation.

Yet in most Catholic churches worldwide, the homily is one of the last forms of public discourse in which no feedback is expected. This is often true even in some African churches, which, despite allowing a degree of instant feedback, are far less responsive than are the communities of their non-Catholic neighbors. Catholic missionaries brought a Western style of pulpit communication and a theology of the priesthood that, even if it included some sense of the priesthood of the laity, did not countenance the people's interrupting or punctuating homilies.

I say no feedback is "expected,” because feedback does in fact always take place, even in many Western cultures. The question is whether or not the preacher picks it up, since the feedback tends to be subtle. Communication theory has made the point that listening is also a form of communication. When I listen intently to someone, I send important, positive signals to the speaker. On those occasions when a preacher can hear a pin drop during the pauses in a homily because attention is so rapt, the congregation is effectively communicating its considerable level of interest and approval of what is being said and how. This silence is different from what is called a "stony silence,” in which the message is being carefully listened to but with disapproval, perhaps even hostility.

Communication has been defined as "the accurate transmission and reception of a message.” Preachers sometimes forget that while they are putting a message out, the hearers are simultaneously transmitting a message, perhaps a multiplicity of messages, back. But if homiletical communication is thought to go in only one direction, Catholic preachers can easily forget the returning message or "tune out” what the congregation is saying to them.

There is also a congregational response that has been referred to as the "fidget level.” When it is high, no pin would be heard if it dropped during a pause in the discourse because of the shifting of feet, the rustling of clothes and so on. The fidget level can be seen and heard by the preacher. And it is a certain sign that, for whatever reason, one simply does not have the congregation's attention. Even in an age when people have a heightened awareness of the importance of body language, preachers sometimes show a surprising lack of interpretive ability in this respect.

The examples I have given so far are unofficial and anecdotal. By contrast, the late Bishop Kenneth Untener of Saginaw, Mich., used to carry a little notebook and solicit comments from the congregation. Although the bishop's personal style was informal, his status as bishop raised the procedure to a sort of quasi-official level, on which the people at Mass could express their assessments of the preaching of their bishop and priests. Unfortunately, such attempts to make feedback official and routine are the exception.

Another exception is the formation of a preaching committee&ampampampmdasha group of parishioners asked to assist the priest, deacon or lay preacher in the preparation, delivery and assessment of the homily. The U.S. Catholic bishops have wisely written: "Only when preachers know what their congregations want to hear will they be able to communicate what they need to hear” (Fulfilled in Your Hearing, 1982). A preaching committee can help a preacher to discern a congregation's needs and thus assist in finding helpful themes for homilies. Such a group can also break down the alienating sense of loneliness that can accompany the process of preparing homilies, an awful feeling of flying solo.

Some preachers routinely begin their homilies with a joke in order to wake up a supposedly sleepy congregation. By contrast, Bishop Untener suggested that the moment between the end of the Gospel proclamation and the preacher's first word is inherently a moment of profound attention. That moment speaks volumes about the congregation's hope, which springs eternal, for a decent homily this Sunday. It also silently articulates a general yearning that congregations have for good preaching. After all, for many people in the pews, the Sunday homily is their primary nourishment in the faith.

We live in a world in which feedback is routine and is built into most forms of communication. Politicians, teachers, journalists and other communicators expect and welcome feedback. Modern church communicators should likewise expect assessors to make helpful comments on their skills. The maintenance and development of professional standards demands such feedback. And in a world of increasingly educated hearers brought up amid democratic discourse, the one-way street of the monologue homily risks becoming a cultural curiosity or an alien, authoritarian symbol. It also seems a far cry from the example of the Word made flesh, who was constantly being asked questions by his hearers and who responded with stories, parables and examples from life.

Today the "simple faithful” are no more I wonder whether they ever existed. My own experience working with people who have not had the good fortune to obtain an academic degree has helped me realize that lack of book learning does not mean lack of intelligence or wisdom. When we get up to preach, we sometimes experience an almost terrifying sense that the people in the congregation know us they can tell very quickly whether we are prepared or not and whether we are genuine or not. The sensus fidelium homes in, not just on the manner and matter of the preacher's message, but more unnervingly on the preacher's character, prayerfulness and holiness (or lack thereof). These a congregation intuits very quickly. And the people's appreciation of these traits (or their unhappiness with what they see) becomes part of the feedback they quietly transmit. That is true whether the preachers are receiving the messages or not.

Chris Chatteris, S.J., is the deputy director and media liaison officer of the Jesuit Institute in Johannesburg, South Africa.Fulfilled in Your Hearingsensus fidelium