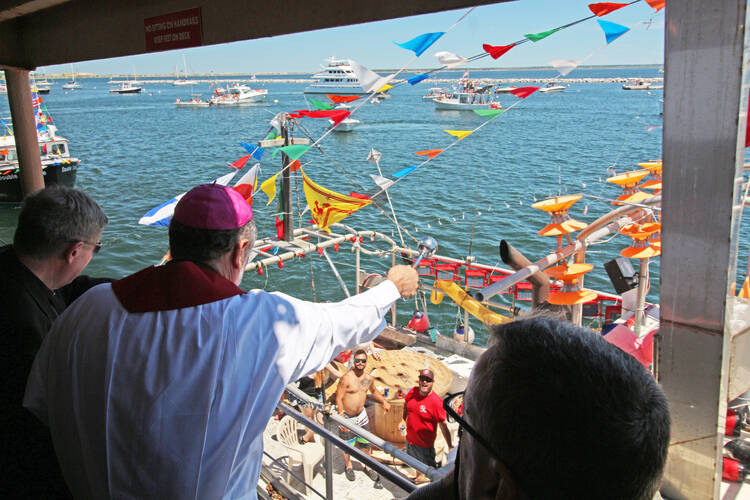 At the very tip of Cape Cod, tiny Provincetown, Mass., has changed considerably over the decades. The place where the Pilgrims first landed in 1620, only to continue on to the more famous Plymouth after the environs proved too inhospitable, is today primarily known as a seaside resort town attracting members of the L.G.B.T. community. But a few generations ago, before the artists moved here to paint the sailboats bobbing in the bay and began transforming the town, it was home to a robust Portuguese fishing population.

Though their numbers are dwindling, the fishermen and their families remain visible, and for one week each summer, the Portuguese Festival dominates the town, with green-and-red flags hanging from wires strung between telephone poles and the seafaring heritage and Catholic faith of the small Iberian nation on full display.

On the feast of Sts. Peter and Paul, celebrated this past Sunday, members of the local Catholic community gather at the town’s sole Catholic church, St. Peter the Apostle. Next to the altar is a statue of St. Peter, perhaps the most famous fisherman in all of Catholicism. The statue is draped in red vestments, matching Bishop Edgar M. da Cunha of the Diocese of Fall River, who is on hand to celebrate the feast. One of the stained-glass windows inside the nautically themed church, which opened in 2008 after a fire destroyed a 130-year-old church in 2005, depicts the Blessing of the Fleet, which will be held later in the afternoon.

When the bilingual Portuguese and English Mass finishes, four members of the local fishing community, wearing bright red sashes around their waists, hoist the statue onto their shoulders. St. Peter wears a stole of red and green and yellow, the colors of the Portuguese flag, and he stands under an arch of ivy, sunflowers and daisies. The statue is the star of a procession that winds its way through a half mile of the small town. The parade begins in a neighborhood of Cape Cod-gray cottages before making its way down the main drag, Commercial Street, home to candy shops, art galleries, lobster shacks and gay bars.

Behind the saint, a marching band provides music for members of local fishing families who carry blue and white banners with the names of fishing vessels embroidered onto to them. A troupe of traditional Portuguese dancers are next, followed by Bishop da Cunha and the church’s pastor, who ride in a white convertible.

The procession turns onto MacMillan Pier, where the Blessing of the Fleet takes place. This is the 70th year the event has been held, modeled on similar blessings back in Portugal. The number of fishing boats is down compared to previous decades, the result of demographic changes and a shrinking fishing industry in New England waters.

Bishop Da Cunha boards a ferry, one of the boats that bring in the tourists from Boston Harbor who make thetown swell from 2,800 residents in the off-season to more than 60,000 at this time of year.

Several vessels that make up this year’s P-town fishing fleet are decked out in nautical flags, the stars and stripes and even some yellow Gadsden flags as they approach the ferry. An announcer uses a P.A. system to give a shout-out to the families and explains the features of the boats to the tourists. The bishop uses an aspergillum to sprinkle the boats and their inhabitants with holy water. The vessels are close enough to the ferry that the bishop offers a friendly hello to those on board.

Some see the blessing as religious, a prayer to protect them and their crews on the rough New England seas. They cross themselves and some kneel for the blessings.

For others, the event is more of a party. One group receives the blessing and raises up their red solo cups as something of a thank you to the bishop.

“The blessing means different things for the people,” he tells me, laughing. “You have different levels of faith connection, cultural connection and some just a popular feast.”

The event sees all kinds of people stopping to take in this uniquely Catholic spectacle: gay couples on their way to brunch, older Portuguese women who know the melodies from the bands and have lived the history of the town, and curious tourists on rented bicycles who rush to the sidewalk to avoid being caught up in the parade.

For the bishop, the entire day is an opportunity for faith to engage the culture.

“I am always intrigued how faith and culture work together in such a way that culture is impacted by the faith and faith is also impacted by the culture,” he says. “I think it’s important that the two help each other.”

“We are here to witness our faith,” he says. “If people see that the church is here to celebrate the culture of the people, I think it’s a good thing.”