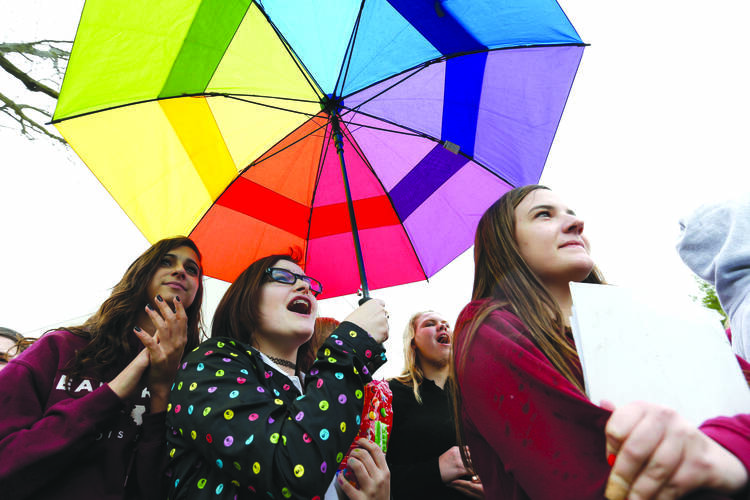 Last month, the bishop of Lexington, Ky., addressed hundreds of L.G.B.T. Catholics and their supporters who were meeting in Chicago at a New Ways Ministry national symposium, telling them, “Your presence and your persistence in the church is an inspiration for me and for many.”

Bishop John Stowe, O.F.M.Conv., told America that he accepted the group’s invitation because of a desire to engage in dialogue with Catholics who do not always feel welcome in the church. “Pope Francis talks about a culture of encounter, and that requires a lot of listening,” he said. “What I’ve seen among gay Catholics in my own diocese is a real desire to live their faith and the challenge to do so within a church that is not always accepting or labels them as disordered.”

Bishop Stowe is certainly not the first bishop to address a gathering of gay and lesbian Catholics, but his insights are emblematic of recent shifts in the relationship between the church and the L.G.B.T. community. Support for pro-L.G.B.T. causes, including same-sex marriage, has risen sharply among lay Catholics in recent years.

Part of that support, several L.G.B.T. advocates said, stems from the increased visibility of gay and lesbian Americans. More people know a family member or friend who identifies as gay or lesbian and are thus more sympathetic to causes they support.

“Who am I to judge?” is one of the defining phrases of the Francis papacy, a statement praised by some Catholics. The pope has followed up that message of inclusivity with concrete actions as well,meeting with a transgender individual at the Vatican and with a gay couple during his U.S. visit in 2015.

But Brian Brown, head of the National Organization for Marriage, told America that those who see in the pope’s words and actions a softening of church teaching on marriage or sexuality “fundamentally misinterpret” his beliefs, pointing as evidence to the pope’s strong words against gender theory, the idea that male and female identity are not biologically fixed.

“People need to know not only what the church teaches but why it teaches it,” he said. “There is a deep, deep well of anthropological, philosophical and theological beauty and truth in church teaching, and I don’t think we’ve done a good enough job in conveying that to the next generation.”

American bishops have emphasized different aspects of the church’s teaching in their outreach to L.G.B.T. Catholics and their families. Cardinal Joseph Tobin of Newark told an L.G.B.T. Catholic group that they would be “very welcome” to organize a pilgrimage to the cathedral in his city. And Cardinal Blase Cupich of Chicago, a delegate to the pope’s global meeting of bishops discussing family issues, said in 2015 that he meets with gay Catholics to understand their perspective and that gay Catholics in relationships could rely on their consciences when it comes to the question of receiving Communion. Meanwhile Archbishop Charles Chaput of Philadelphia, also a delegate to the Synod of Bishops, has said that gays and lesbians not following church teaching on chastity are not welcome to Communion.

Arthur Fitzmaurice, an Atlanta-based Catholic who through lectures and workshops advocates greater acceptance of L.G.B.T. Catholics in the church, said there have been “a lot of ups and downs” over the past decade. “Catholics in the pews generally accept people in same-sex unions and want the church to be a safe space for them, but there are still pockets in the church in areas where [L.G.B.T.] people feel isolated,” he said.

Despite shifting views among average Catholics, advocates for L.G.B.T. people say the church can still feel unwelcoming. Church teaching that homosexual acts are “intrinsically disordered” has not changed, and the Vatican reaffirmed its ban on priests with “deeply-seated homosexual tendencies” as recently as last December. Some also point to policies that prohibit gays and lesbians from holding leadership positions in parishes and to the termination of openly gay and lesbian employees from Catholic schools and other institutions.

Margie Winters was fired from her position as the head of religious education at a Philadelphia-area Catholic school in 2015 after a parent complained about her marriage to a woman. She told America that dismissals like hers lead some to drift away from the church, taking with them their creativity, energy and faith.

Just three months after she was fired, Ms. Winters and her wife were part of the crowd welcoming Pope Francis to the United States during a ceremony on the White House lawn, an event she described as “an incredible privilege.” She continues to be active in her parish and said she has hope that other L.G.B.T. Catholics will also feel welcome in the church.

“With any institution that is as large and has as long a history as the church, any kind of overtures are welcome,” she said. “But I also don’t expect that the church is going to change overnight. I think Pope Francis and others of his mindset are trying to change the tone and the pastoral approach to L.G.B.T. persons, but it’s a long road.”

Rather surprised that there are no comments before mine.

Being Pastoral does not mean accepting everything that a member of the Parish does is acceptable.

Perhaps if the Church spoke out more against unlimited greed and refused communion to "Wall Street Hyenas" who bet with other people's money and claiming it as their own when the stocks go up and saying it
was our money that they lost when stocks go down - the Teachings of the Church would be more respected.

The polls that show more and more Catholics 'accepting Same Gender"
marriages illustrate how little Catholics know about their faith. If two or more people want to enter into some sort of contractual union that is their own business, but that it is called a "Marriage" when they share the same gender, is simply a falsehood.

Henry George, please see my comment to Rod Dreher, because what you and so many so-called "Traditionalists" are unable to see is that "gay marriage" follows logically upon the dominant Protestant and secularist re-definition of "Christian marriage" dating all the way back to the "Protestant Reformantion." My argument to Dreher is simply that Catholics have "no dog in this fight" because Catholic MATRIMONY is fundamentally different from Protestant and secularist "marriages"--which, in American cultural contexts, are no different than "civil unions" because they are, conceptually, "dissoluble"--and have been ever since Luther declared the prohibition against divorce (in his "Table Talk") to have been made with the Saviour's "tongue far in His cheek," in order to convict Christians of their inability to avoid concupiscence and their consequent need to be "saved by faith alone."

Half a century of downplaying the reality of the sin of pride results in the sin of chastiphobia and the desire of those pursuing intrinsically disordered "life styles" to sanctimoniously lecture anyone that refuses their disordered assumptions.

Every candid and emotionally healthy homosexual person I know -- there are dozens -- judges that his sexual orientation is abnormal and defective. That is extremely close, if not equivalent, to judging that his sexual orientation is intrinsically disordered.
The judgment that homosexual desire is abnormal and defective does not imply that God forbids homoerotic behavior -- no more than the judgment that autism is abnormal and defective implies that God forbids autistic behavior. The Church's beliefs about God's will for homosexuals cannot be based entirely a fallacious inference from the abnormality and defectiveness of their desires.
Actually, the Church's teachings that God forbids homoerotic behavior and same-sex marriage are based on several other fallacies and misinterpretations of the Bible. These are well-hidden fallacies and very plausible misinterpretations. Therefore, the Church's teachings have seemed God's truth to almost all its opinion-leaders. Activists who would reform the Church's teachings should expose its misinterpretations and fallacies instead of complaining about its judgment that same-sex desires are disordered.

Is the Catholic Doctrine--the Catechism---defining Homosexual sex---wrong? Do we expect a change? Can there be a valid union among three people?

Richard Bell, let me suggest something to you: instead of calling the homosexual orientation "defective" or "sinful," why can't we just label it more accurately as an "impoverished" condition. If we did that, don't you think it would be possible for the Church to adopt a more charitable and compassionate attitude toward LBGT people--and also to create a ministry to them with its own definition of how they can be peculiarly "chaste" within their own orientation--and also have devotional practices, and even "rites of friendship" that, instead of being "sacraments" like matrimony would still be open, public and respectable? Remember that, unlike Protestantism, Catholicism has always called poverty "holy," because it is a way of "taking up one's cross" and following Jesus; "following Jesus" is different for a rich person, a poor person, a handicapped person, a soldier in conflict, etc., so why can't it be different for a gay person? ALL of these conditions are "impoverished" in some way, but all of them are "rich," too, simply because of the OPPORTUNITY they hold to "follow Jesus," and "take up a cross."

There seems to be a "moral acceptability creep". Is any sexual union disordered? There are advocates for sex with children---group sex---long term cohabitation--
What happened to The Sacrament of Holy Matrimony? honored at Christ's miracle at Cana?

There seems to be a "moral acceptability creep". Is any sexual union disordered? There are advocates for sex with children---group sex---long term cohabitation--
What happened to The Sacrament of Holy Matrimony? honored at Christ's miracle at Cana?