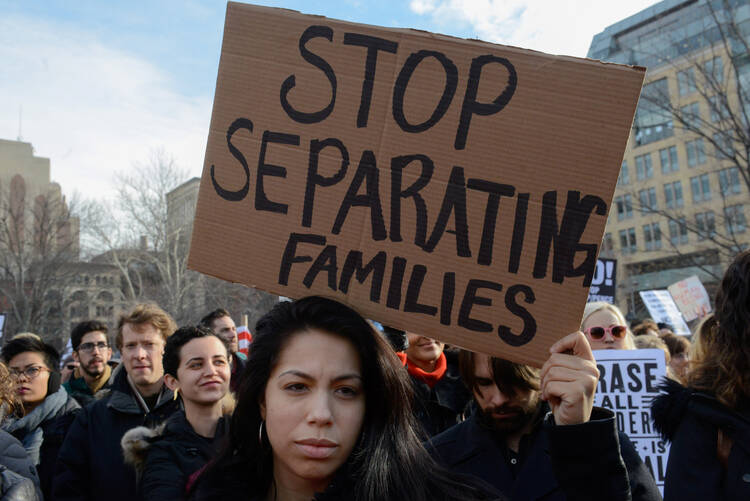 Click here for ongoing updates from the bishops' meeting in Indianapolis.

Taking stock of their efforts over the past six months to combat some Trump administration attempts to crack down on undocumented people living in the United States, Catholic bishops meeting in Indianapolis today pledged to be more proactive in laying out a vision for comprehensive immigration reform.

Bishop Joe Vasquez, head of the bishops’ migration committee, said in a report to fellow bishops that church leaders now seek “to move beyond simple reaction to the various negative proposals we have seen lately.”

Catholic bishops pledged to be more proactive in laying out a vision for comprehensive immigration reform.

Following Mr. Trump’s surprise victory in November, the U.S. Conference of Catholic Bishops convened a special working group to coordinate the church’s response to immigration proposals from the new administration. That group concluded its work this month.

Archbishop José Gomez of Los Angeles, who chaired the group, recounted the flurry of statements condemning many of Mr. Trump’s proposals, such as building a wall along the U.S.-Mexico border and banning refugees from several predominantly Muslim nations. Archbishop Gomez said the bishops’ efforts “helped to make a positive impact on the public conversation regarding the [executive] orders.”

In recent months, some Christian groups have declared themselves sanctuaries for undocumented residents, promising to house them in churches if they fear deportations. Catholic leaders have largely shied away from such declarations, insisting that they have no legal basis for such moves and that doing so could ultimately offer false hope to undocumented immigrants.

Archbishop Gomez said the bishops’ efforts “helped to make a positive impact on the public conversation regarding the [executive] orders.”

Instead, Catholic organizations have continued to work with undocumented individuals to pursue legal avenues that could grant them temporary relief.

Archbishop John Wester of Santa Fe took to the floor to express concern that these avenues were increasingly being blocked by the Trump administration. He wondered if U.S. bishops might take a more serious look at the sanctuary movement.

“We know that for many people who would be deported, they would be going back, I think, very realistically, to a possible death and other kinds of realities,” the archbishop said.

Offering sanctuary, he said, “will not provide what the immigrant community needs long term, and that is to be incorporated as fellow citizens, brothers and sisters of one society.”

“That is not a sustainable, long-term solution,” he continued.

Other bishops suggested that the United States should do a better job in encouraging stability, prosperity and peace around the world so that individuals feel safe living in their home countries and, at the same time, should pay attention to economic concerns of Americans who feel threatened by immigration.

“How do we express our support immigrants but also understand the economic hardships that others are experiencing in our country?”

“How do we express our support or those that are immigrants and new to our country and stand with them, but also understand…the economic hardships that others are experiencing in our country and have a solidarity with them?” Archbishop Joseph Naumann of Kansas City, Kan., asked. “The chaos of illegal immigration is bad for everybody.”

Turning to the politics of immigration, Archbishop Gomez suggested that if the Trump administration is serious about renegotiating Nafta, then “maybe they need to include a treaty on the movements of people, because when you move capital, people move, too.”

Chicago Cardinal Blase Cupich, meanwhile, suggested that U.S. bishops look to the failed 2013 bipartisan immigration reform effort in the U.S. Senate for inspiration. “By telling people what was in that bill...you can simplify the issues,” he said.

As the working group winded down, Bishop Robert McElroy of San Diego urged fellow bishops not to become complacent on immigration. He questioned whether the temporary working group should disband at all, worrying that it sends a signal that the church is moving “from a level of heightened alert on this to a level of lower alert.”

“Our people are more fearful because of what has gone in the past months,” he said. “I think we need to be very leery of normalizing the heightened level of fear which is there.”

"But Bishop Jaime Soto of Sacramento urged caution. Offering sanctuary, he said, “will not provide what the immigrant community needs long term, and that is to be incorporated as fellow citizens, brothers and sisters of one society.”

Yes. And, by the way, just when will Soto and his cronies argue such inclusion for the LGBT community?

Border walls, the forced separation of families, anti-immigrant ordinances, and the breaking of agreements to Chaldean Chritians, U.S. combat veterans, and Dreamers (all who are subject to deportation) make a mockery of our Catholic values. It's time we lead with love and demand mercy for those who have done nothing more than cross a border. Migration is part of God's creation. While a nation has a right to determine who gets in and who doesn't, immigration laws must be just and humane. Ours are not. For me the real question is not how will God judge those who have crossed the border without authorization. The real question is how we as individuals, as a nation, and as a Church will be judged for our response or indifference to these complex circumstances. I believe we must extend the love and mercy God wants us to have to our brothers and sisters. God help us if we fall short.

Until the bishops and America editors and authors endorse a coherent immigration policy all they say are empty words.

When the pope visited, I didn't see him being concerned with giving compassion to US Citizens who are poor, uneducated, who have lost their jobs to Illegal Aliens. This effect was warned about in 1965:

“In light of our 5 percent unemployment rate, our worries over the so called population explosion, and our menacingly mounting welfare costs, are we prepared to embrace so great a horde of the world’s unfortunates? At the very least, the hidden mathematics of the bill should be made clear to the public so that they may tell their Congressmen how they feel about providing jobs, schools, homes, security against want, citizen education, and a brotherly welcome… for an indeterminately enormous number of aliens from underprivileged lands.” “We should remember that people accustomed to such marginal existence in their own land will tend to live fully here, to hoard our bounteous minimum wages and our humanitarian welfare handouts…lower our wage and living standards, disrupt our cultural patterns.” Myra C. Hacker, Vice President of the New Jersey Coalition of Patriotic Societies, on the 1965 Hart Celler Act

“Whatever may be our benevolent intent toward many people, the bill fails to give due consideration to the economic needs, the cultural traditions, and the public sentiment of the citizens of the United States.” Myra C. Hacker, on the 1965 Hart Celler Act

Also, isn't it interesting that the catholic church is one of the largest recipient of financial "donations" in the world? If the pope is so concerned for these migrants, then why doesn't he exhort those countries (including his native Argentina) to take care of their citizens in need?

"Not to be lost in the pomp and circumstance of Pope Francis’ first visit to Washington is the reality that the Catholic Church he oversees has become one of the largest recipients of federal largesse in America."