In Space as on Earth: God, science and 'Star Trek' 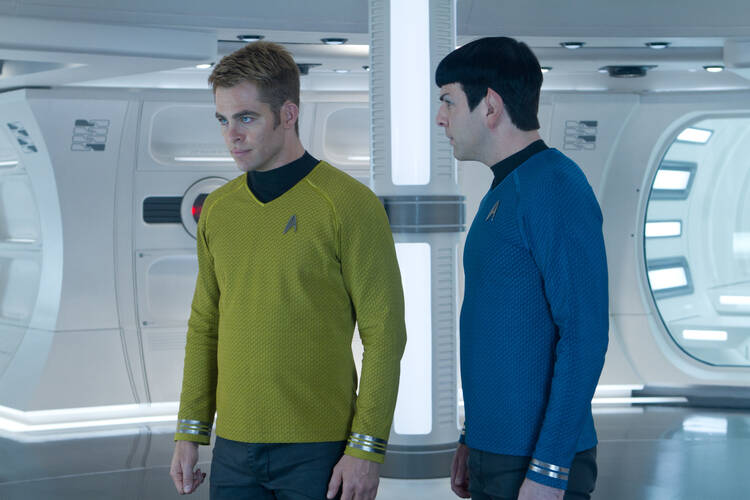 The term science fiction is an oxymoron. Fiction is the stuff of imagination, where the human leaves the real, or breaks free of the present in order to picture the future. Science, however, is the domain of the fixed, realities rigidly determined by what we call the laws of nature. Strictly speaking there can be no fiction about science. Who would read a novel or short story about, say, cellular degeneration? What we call science fiction is a resetting of our own well known humanity in an imagined future. And that’s the wonder of our humanity. Imagining it anew has a way of broadening it. Humans deepen when they dream.

The “Star Trek” franchise, which began with Gene Roddenberry’s 1966 eponymous television show, explicitly envisions a future where the bright promise of human progress, premised upon modern science, is realized. It has come to include six television shows and twelve feature films. Although it imagines the future, it is contemporary fiction, so it’s intriguing to examine how it both reflects and re-envisions us, especially on the questions of God and religion.

We supposedly live in an era of conflict between science and religion, though the tension between the two is most pronounced for those who don’t know their science or their religion very well. Already in the 19th century, the First Vatican Council, in its document on revelation Dei Filius taught that “between faith and reason no true dissension can ever exist, since the same God, who reveals mysteries and infuses faith, has bestowed on the human soul the light of reason” (no. 4). Catholicism, like mainstream Judaism and Islam, sees all truth as rooted in God; therefore, any conflict between science and religion is either temporary or only apparent. It either arises out of a theological or a scientific approach that is destined to be supplanted or through the limited perspective of a given individual’s grasp of the two disciplines.

So, for example, in the 19th century, Darwin’s theory of evolution appeared to call into question God’s existence, because it challenged the biblical account of creation. Today it causes little difficulty for non-fundamentalist believers, because we no longer read Genesis as though it were written as a scientific communique from God.

Of course, there is always a distinction to be drawn between the leading insights of a society and the viewpoints of its denizens. Just as our medieval forebears thought faith answered every conceivable question, our contemporaries tend to presume that science now does the same. America recently ran a picture of a young atheist, sporting a t-shirt that read “Atheists: In Science We Trust.” Pardon my irreverence, but science is only a method. Science isn’t an agent at work within the world anymore than God is. To say that one trusts in science is to assert no more than confidence in collective human reasoning, the very stuff of "Star Trek."

The original series suffered from a similar, oft-repeated and really rather annoying misapprehension. Mr. Spock, the paragon of Vulcan enlightenment, would assert that an approach or understanding wasn’t “logical.” Logic deals with tautologies, self-evident truths that are known by virtue of the mind’s structure, whereas the questions at hand on the Enterprise dealt with an analysis of empirical evidence. What the authors of those early episodes meant was that something was irrational. It failed to use human reason effectively because of ignorance or emotional prejudice. Like so many naive enthusiasts for science today, a semester’s worth of philosophy would have done wonders in the writers’ room.

And maybe a little anthropology. In this summer’s “Star Trek into Darkness,” primitive aliens catch a glimpse of the Enterprise, and a throw-away shot that follows (I mean not only that it’s brief but also that it should have been thrown away) shows them worshiping an image of the spaceship. This doesn’t even correspond to contemporary anthropology on the origins of religion. The roots of humanity’s spiritual impulse run deeper than astonishment at the unexplained.

Most people today would be surprised to learn that contemporary theologians don’t approach God as simply one more agent—albeit one infinitely more powerful—who is active within the world. God typically doesn’t appear in today’s theology as a counter to intra-world, scientific explanation. As C. S. Lewis put it, this would be akin to looking for the novelist in the pages of the novel. Certainly the approach of contemporary theology is due in large measure to advances in scientific understanding, but, the shift having been made, modern theologians have been able to look back upon their own tradition, realizing that neither the Fathers of the Church nor the greatest of the medieval theologians typically approached God as a substitute for natural explanations.

Looking at the "Star Trek" franchise collectively, rather than at individual television episodes or movies, perhaps the most basic fact about the world that it envisions for the future is the absence of organized religion. No reference is made to any contemporary religions—not even the celebration of Christmas. What’s interesting, however, is that religion, or at the very least spirituality, is frequently depicted among alien races, and not always in a negative manner. There’s no better example than Vulcan mysticism. The Vulcans are a more advanced society, and yet they use meditation and ritual in order to purify the human psyche, even to reach beyond the confines of their own empiricism.

The word psyche is aptly chosen, because the Vulcan mind-meld—a Vulcan can achieve inter-conscious communication through physical touch—evidences our own unease with the notion that the mind can be reduced to physical components. “The Next Generation” accomplishes something similar with the introduction of a “Ship’s Counselor,” the empathic alien Deanna Troi, who enunciates perceptions and values that elude empirical methodology. Though the assertion is almost treated as blasphemy today, “Star Trek” does seem to recognize that “science doesn’t have all the answers.”

What should be noted about the world that “Star Trek” tells us to expect is that God, as ultimate moral arbitrator and vindicator, remains a lodestar of human striving. If Marx had been correct, a world without famine, disease, even economic want, should have no place for God. And yet, traveling into space, we seem to discover that we transport the human (or its converse reflection, the alien) with us. The men and women of the future still struggle against evil, especially the moral evil that they find within themselves. They still insist that right should triumph over wrong, that the good should win out in the end.

There are plenty of episodes in the long franchise history in which some figure appears as divine savior, only to be rebuffed, but if is this is anti-religion, then so is the Hebraic prophets’ rejection of idols. “Star Trek” certainly doesn’t affirm the Christian assertion of Christ as savior, yet these words from Gaudium et Spes are as trenchant in space as they are on earth. “All the endeavors of technology, though useful in the extreme, cannot calm our anxiety; for prolongation of biological life is unable to satisfy that desire for higher life which is inescapably lodged in our breasts” (no. 18). Human beings were seekers long before we entered space, and “Star Trek”’s ongoing search for new worlds suggests that the struggle for a life beyond evil remains the final frontier.

The Rev. Terrance W. Klein is a priest serving in the Diocese of Dodge City, Ks.