Meet El Salvador's first cardinal: a man of the people who was close to Oscar Romero 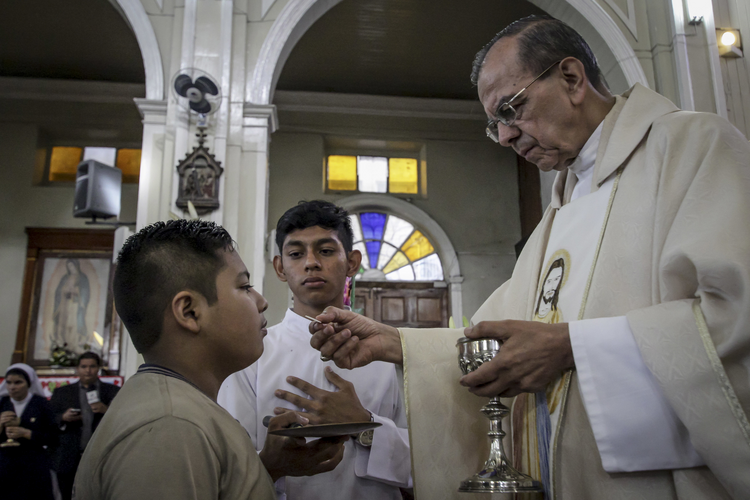 A youth takes the Eucharist from Monsignor Gregorio Rosa Chavez during a Mass giving thanks for Pope Francis' announcement that Chavez will be elevated to the rank of cardinal, at San Francisco de Asis parish church in San Salvador, El Salvador on Monday, May 22, 2017. (AP Photo/Salvador Melendez)

Monsignor Gregorio Rosa Chavez, an auxiliary bishop who works as a parish pastor in El Salvador, was alone preparing to lead a Sunday Mass when a friend called to say he heard Pope Francis had named him as a new cardinal.

Rosa Chavez had never sought power within the church and was actually planning to retire, so the announcement came as a shock.

"You're dizzy, overwhelmed, taken aback and you don't know how to react," he said Monday of his reaction to the news.

Rosa Chavez was close to the late Salvadoran Archbishop Oscar Romero, who was killed by a right-wing death squad in 1980 during El Salvador's civil war and beatified in 2015. The dedication to work with the poor is something Pope Francis has long emphasized.

Rosa Chavez thanked Romero for what he called a "gift." He will become El Salvador's first among the elite who elect popes at a June 28 ceremony at the Vatican.

As an adviser to the pope he could potentially draw the church into a more formal and prominent role in addressing the gang violence gripping El Salvador in recent years. He has said that he would support a dialogue between the government and the country's powerful street gangs under the right circumstances, but so far the church has not played a formal role.

In 1977, when Romero was named archbishop, Rosa Chavez headed up his communications office. Together they confronted some of the church's most difficult moments in the run up to the country's civil war.

Rosa Chavez has a reputation as a man of the people, warm and quick to smile.

"Monsignor was always at ease being the auxiliary when he deserved to be archbishop, but his prize arrived," said parishioner Estela Henriquez leaving the cathedral after mass Sunday.

The son of a humble farmer, Rosa Chavez had never dreamed of becoming a priest, but when he was 14 his father asked a friend to take him to a seminary.

After Romero's successor as archbishop died in 1994, many expected Rosa Chavez to be given the job, but it never happened.

He was outspoken during the war about the government's abuses, publicly identifying the alleged perpetrators of the killings of six Jesuit priests in 1989. Critics labeled him a "communist priest" and he received death threats.

Rosa Chavez said communications remain a passion. He starts his day listening to Vatican radio and doesn't sleep until he has read the most important newspapers in El Salvador and the world.

Gregorio Rosa Chavez. I will remember his name.

I would like to see Francis appoint some younger Cardinals. But having Cardinal Rosa Chavez amidst the red hats does give me hope for a more humble Church.