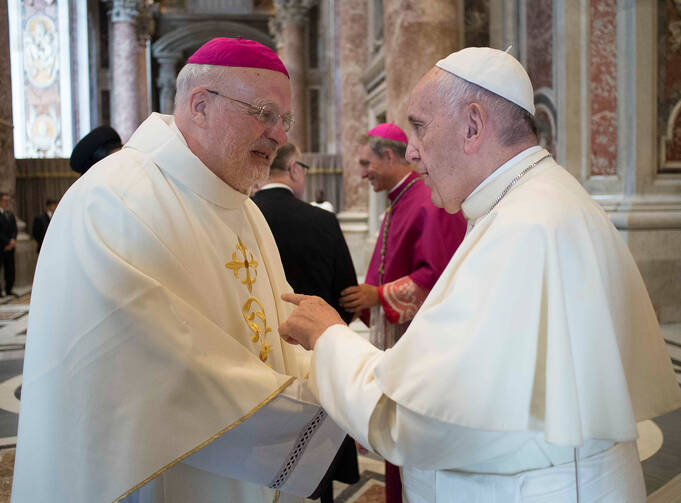 Swedish Bishop Anders Arborelius of Stockholm, seen here at the Vatican in 2016, is among the five new cardinals named by Pope Francis. (CNS photo/L'Osservatore Romano via Reuters)

In a surprise announcement today, Pope Francis said he will hold a consistory to make five new cardinals on June 28. Two are Europeans—from Spain and Sweden—while the other three come from Africa (Mali), Asia (Laos) and Latin America (El Salvador).

Pope Francis took everyone in Rome by surprise when, after reciting the Angelus at midday on Sunday, May 21 (and praying for peace in the Central African Republic and for the church in China), he announced the new cardinals and said, “their belonging to different parts of the world shows the Catholicity of the church spread on all the earth.” Moreover, by assigning them a titular church in the city of Rome, he said, “they also belong to the diocese of Rome that, in the words of St. Ignatius of Antioch, ‘presides in charity’ over all the churches.”

It had been expected that the pope would hold a consistory later this year, given that the number of cardinal electors had decreased to 116 (four fewer than the traditional complement of 120 electors in the College of Cardinals), but no one had expected it quite so quickly. One possible reason for the timing is that Francis plans to visit Bangladesh and India at the end of November or early December, which would normally be the time that consistories are held.

This will be the fourth consistory since his election as pope on March 13, 2013. Francis has adopted the same criteria as in the previous instances with his latest choices for cardinals: universality, attention to “the peripheries,” finding humble pastors with “the smell of the sheep,”’ reducing the number of Europeans and particularly Italians in the College of Electors, abandoning the tradition that appointment to certain sees automatically brings with it a red hat, and restricting the number of Roman Curia cardinals by reserving the red hat only for the prefects of congregations (or their equivalent).

His nominations today reaffirm his wish for universality, both among the cardinal electors and in the College of Cardinals as such. Electors are cardinals under the age of 80 who have the right to vote in a conclave. Francis has again decided to abide closely to the ceiling of 120 electors established by Paul VI in 1975, and when he gives the red hat to the five on June 28, he will have created 49 of the 121 electors that will have a right to vote in the next conclave.

In all four consistories, Francis has given special attention to what he calls “the peripheries” of the church and the world. That criterion is clearly evident in choosing men to be cardinals from Laos, Mali, Sweden, and El Salvador; most, if not all, come from countries that have never had a cardinal before.

Francis has given special attention to what he calls “the peripheries” of the church and the world.

In his first three consistories, Francis has sought to reduce the number of European and Italian cardinals among the electors, as they were vastly overrepresented in past conclaves. In the last three conclaves Europeans accounted for over half of the electors, and more than half of the Europeans were Italian. This time round, he has nevertheless chosen to give red hats to two Europeans: the archbishop of Stockholm, Sweden (a first for his country) and the archbishop of Barcelona—a man who is known to be close to Francis, shares his vision of the church and was expected to be made cardinal at last November’s consistory. Francis has not named any Italian cardinal in this new list.

He concluded his announcement today by entrusting the new cardinals to the protection of Saints Peter and Paul, so that with their intercession “they may be authentic servants of ecclesial communion and with the Apostle of the Gentiles [St. Paul], be joyful announcers of the Gospel to the whole world and, with their witness and their counsel, help me more intensely in my service as Bishop of Rome and Pastor of the Universal Church.”

Note: An earlier version of this article incorrectly stated that the new appointments will bring the total number of electors in the College of Cardinals to 120 rather than 121.

Wonderful news! But how about some new cardinals under 70 years of age? (There is one--he is 68 years old.)