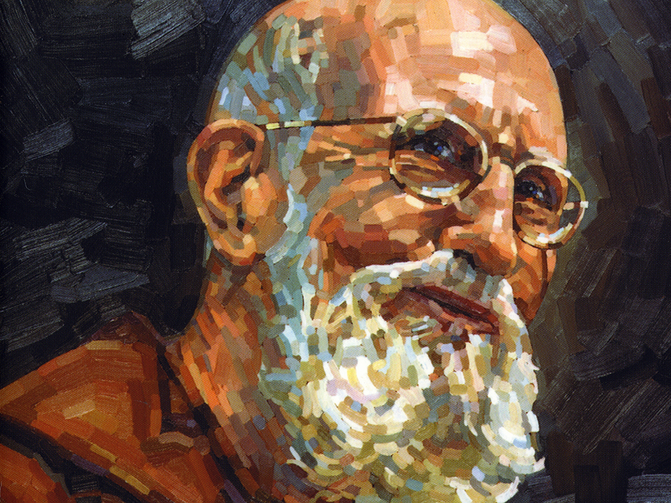 The pope approved the decrees during an audience May 4 with Cardinal Angelo Amato, prefect of the Congregation for Saints' Causes.

Father Casey (1870-1957) was known for his great faith, humility and compassion and for his ministry as spiritual counselor. He gained a popular following during his lifetime, with healings attributed to his intercession both before and after his death.

He was the sixth of 16 children of Irish immigrant parents. He was born on a farm near Oak Grove, Wisconsin, and as a young man worked as a logger, a hospital orderly, a streetcar operator and a prison guard before entering the Capuchins at age 26.

He was ordained in 1904 as a "simplex priest," one who is unable to hear confessions or preach dogmatic sermons because he had not performed very well in his studies. He carried out humble tasks in the monastery and, while serving in Yonkers, New York, Father Casey was assigned to be the friary's porter, or doorkeeper, a ministry he would carry out for the rest of his life.

He was known to be gentle, approachable and genuinely concerned for people as he had unique insight into people's needs and how they fit into God's plans.

Among the other decrees May 4, Pope Francis recognized the heroic virtues of Cardinal Nguyen Van Thuan, who served as president of the Vatican's Pontifical Council for Justice and Peace from 1998 to 2002 -- the year he died.

Born in 1928, Vietnam's communist regime jailed him in 1975 when he was the newly named coadjutor bishop of Saigon, later renamed Ho Chi Minh City. He was never tried or sentenced and spent nine of his 13 years of detention in solitary confinement. His uncle was South Vietnam's first president, Ngo Dinh Diem, a Catholic who was assassinated in 1963.

Also May 4, the pope recognized miracles that advanced the causes of three religious women toward beatification and the martyrdom of Lucien Botovasoa, a married man with eight children, who was also a Third Order Franciscan, teacher and a catechist at his parish in Vohipeno, Madagascar.

Treating saints like superheroes is a dangerous game.
Robert Ellsberg
As the African island went from being a colonial outpost to an independent nation, Botovasoa was blacklisted as an enemy of the cause for independence and was killed in 1947 out of hatred of the faith.

Years later a village elder admitted on his deathbed to a local missionary that he ordered the murder of Botovasoa even though Botovasoa had told him he would be by his side to help him whenever he was in need. The elder told the missionary he felt Botovasoa's presence and asked to be baptized.

I am joyful that Fr. Solanus Casey will be Beatified along with other holy people by Pope Francis. As a young man living in Detroit I served Fr. Solanus's Masses twice. He was ordained in the Simplex Mode in which faculties to hear Sacrament Confessions was not granted, be cause his teachers decided he had not sufficiently grasped necessary elements of moral theology. However, in dire need, Simplex Priests may hear Confessions. He had difficulty studying not only in Latin as was then done in his time, but in German as well as there was a strong German influence in the seminary he attended. Thousands of people with spiritual and here-and-now needs flocked to him. People felt he had right answers, not always the preferred ones, but people understood and accepted when he would say, "Praise God in all His Designs! Blessed Father Solanus, pray for us!

Once I saw Father Solanus walking the cloister hallway praying his Breviary. The area was secluded from the Front Office of the friary where human and Divine business was conducted, but close enough for easy access to answer calls. Suddenly a thunderous voice shattered the quietness of the cloister as Brother Doorkeeper, Gerard his name, likeable but loud, maybe stressed by the frequent calls for the holy friar, bellowed out, “FATHER SOLANUS, TELEPHONE!”

I watched as Father Solanus closed his Breviary and started to run to answer the call. Father Bernard the Guardian, that’s how Franciscans address the local Superior, nearby, called out twinkle in his eye saying jokingly, “Father, slow down!” Immediately Father Solanus stopped running and slowed down although I could see, everything in him was saying, “Run!” This immediate response despite personal preference awed me greatly as I saw the Vow of Obedience perfectly practiced and made as tangible as a healthy heartbeat!

Years later I told a Capuchin priest-friend about the example of prompt Obedience to the voice of ecclesial authority by Father Solanus and he told me it became part of the initial enquiry into the whether or not Father Solanus practiced heroic virtue. As a result, I like to believe I helped a smidgen to get Father Solanus where he is today. By Providential arrangement may it be that Canonization is not too far off.

As a brief addendum, I heard years later well into his priesthood, Father Solanus was offered the opportunity to receive Faculties but respectfully declined saying he believed God had place him where He wanted him to be, in the Simplex Mode. One of his classmates was also ordained as simplex priest but contested it. He was subsequently granted Faculties and had a long and fruitful priestly ministry. But it is Father Solanus that is remembered and honored by the Church, the one who in humble obedience accepted his subordinate call.

I’ve posted this story before on online AMERICA, but it seems an appropriate place to do it again. Father Solanus liked to play the Fiddle, some say not very well, but it gave the friar enjoyment, so he often did so. One evening he came to the rec room where friars had gathered to read newspapers, listen to the radio (no TV then) or to talk and laugh together. As he began to play his Fiddle all the Brothers stopped what they were doing, politely listen and at the end politely clapped. Father must have felt he was pretty good, so the following Sunday evening he returned to the rec room for a second “concert.” This time the friars kept talking, laughing, reading, listening to the radio, no one paying attention.

He got the message, What did he do? He did what only a saint would do, he went to the Chapel and played his Fiddle before the Blessed Sacrament! I believe because he had ears to hear, he heard Jesus clapping, saying to him, “Thanks Solanus! I enjoyed your rendition as did all the angels and saints!”