Will he or won't he? Speculation builds on Trump meeting with Pope Francis 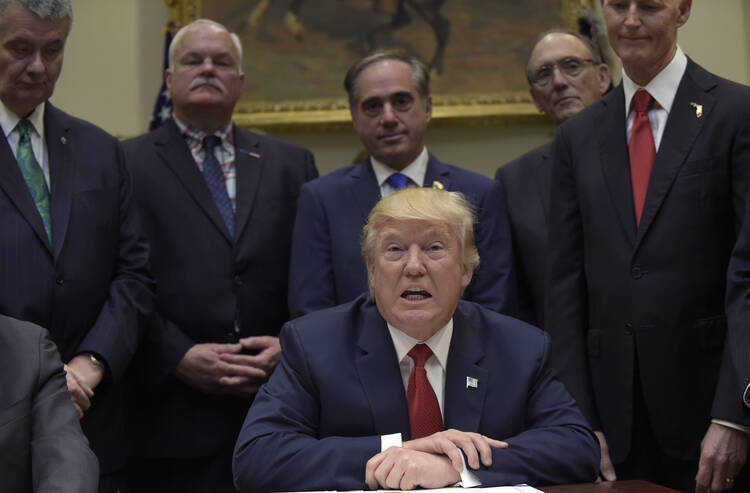 President Donald Trump talks about the Veterans Choice Program Extension and Improvement Act before signing it, Wednesday, April 19, 2017, in the Roosevelt Room of the White House in Washington. (AP Photo/Susan Walsh)

It is still not clear if President Donald J. Trump will meet Pope Francis during his visit to Italy in May. The Vatican spokesman, Greg Burke, told America that no official request for an audience had arrived at the Vatican from the U.S. president as of late Wednesday evening, April 19.

Senior Vatican officials have made it clear that a request from the Trump administration for a meeting with Pope Francis around the time of his visit to Italy for the Group of Seven nations meeting would be granted.

Yesterday, Archbishop Angelo Becciu, the number three ranking Vatican official who is responsible for the general affairs of the church, told the Italian news agency ANSA: “Pope Francis is always willing to receive the heads of State that ask for an audience.”

Vatican: If the U.S. president requests an audience, “the door would be open.”

To date, 12 U.S. presidents have met six popes at the Vatican, starting with Woodrow Wilson who visited Pope Benedict XV on Jan. 4, 1919.

Speculation has mounted in the Italian media that Mr. Trump could become the 13th president to meet with a pope following the statement by the White House spokesman Sean Spicer on April 19 that the administration “will be reaching out to the Vatican to see if an audience with the pope can be accommodated.” Mr. Spicer added, “We would be honored to have an audience with his holiness.”

Vatican and U.S. church leaders urge Trump to reconsider environmental rollback
Michael J. O’Loughlin
President Trump is scheduled to visit Italy from May 26 to 28 for the G7 summit in Taormina, Sicily, which brings together the leaders of Canada, France, Germany Italy, Japan, the United Kingdom and the United States, together with European Union chiefs. Before arriving in Italy, he is due to make a stopover in Brussels, Belgium, for a NATO summit.

While President Trump has yet to appoint an ambassador to the Holy See, a senior Vatican official told America that the absence of an ambassador “is not an obstacle to the visit of the president, if he wishes to come.” He made it abundantly clear that if the U.S. president requests an audience, “the door would be open.”