Fatima 100 years later: Why believers, nonbelievers alike are intrigued by Our Lady of the Rosary 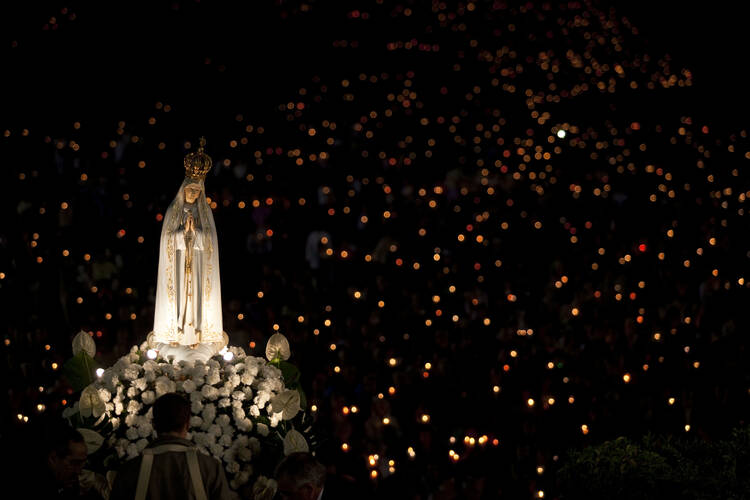 A statue of Mary is carried through the crowd in 2013 at the Marian shrine of Fatima in central Portugal. (CNS photo/Paulo Cunha, EPA)

While conversion and prayer are at the heart of Mary's messages at Fatima, Portugal, the miracles and unexplained phenomenon that accompanied the events 100 years ago continue to intrigue believers and nonbelievers alike.

The apparitions of Mary at Fatima in 1917 were not the first supernatural events reported there.

Two years before Mary appeared to the three shepherd children—Lucia dos Santos and her cousins, Jacinta and Francisco Marto—they saw a strange sight while praying the rosary in the field, according to the memoirs of Sister Lucia, who had become a Carmelite nun.

"We had hardly begun when, there before our eyes, we saw a figure poised in the air above the trees; it looked like a statue made of snow, rendered almost transparent by the rays of the sun," she wrote, describing what they saw in 1915.

The next year, Francisco and Jacinta received permission to tend their family's flocks and Lucia decided to join her cousins in a field owned by their families.

It was 1916 when the mysterious figure appeared again, this time approaching close enough "to distinguish its features."

"Do not be afraid! I am the Angel of Peace. Pray with me," Sister Lucia recalled the angel saying.

"Do not be afraid! I am the Angel of Peace. Pray with me," Sister Lucia recalled the angel saying.

The three told no one about the angel's visit and received no more heavenly visits until May 13, 1917. While the children tended their sheep and played, they were startled by two flashes of lightning.

As they made their way down a slope, the children saw a "lady all dressed in white" standing on a small tree. It was the first of six apparitions of Mary, who gave a particular message or revelation each time:

—May 13, 1917. When asked by the children who she was and where she came from, the lady said she was "from heaven" and that she would reveal her identity later. She asked the children to come back to the Cova da Iria on the 13th day of the month for the next six months, and she asked them to pray the rosary every day "in order to obtain peace for the world" and the end of World War I.

—June 13, 1917. The lady said she would take Francisco and Jacinta to heaven soon while Lucia would remain on earth for "some time longer" to establish devotion to the Immaculate Heart.

—July 13, 1917. The lady said she would reveal her identity in October and "perform a miracle for all to see and believe." After telling the children to make sacrifices for sinners, she revealed three secrets; two of the secrets were not shared publicly until 1941 and the third secret, written down by Sister Lucia and sent to the Vatican, was not released until 2000.

The first secret involved a vision of hell in which the children saw "a sea of fire" with demons and human souls shrieking "in pain and despair." In her memoir, Sister Lucia said people nearby, who had begun gathering around the children on the 13th of the month, heard her "cry out" during the frightening revelation.

The second secret was that while World War I would come to end, a "worse one will break out" if people continued offending God.

The children were told that calamity would be prevented if Russia was consecrated to the Immaculate Heart. Although Sister Lucia confirmed that the consecration was done properly by Pope Pius XII in 1942 and by St. John Paul II in 1984, some Fatima devotees continue to argue that it was not.

The third and final secret, published 83 years after the Fatima apparitions, was a vision of a "bishop dressed in white" shot down amid the rubble of a ruined city. The official Vatican interpretation, discussed with Sister Lucia before its publication, was that it referred to the persecution of Christians in the 20th century and, specifically, to the 1981 assassination attempt on the life of St. John Paul II.

Pope Francis will canonize two of the children who saw Our Lady of Fatima
Gerard O’Connell
Cardinal Joseph Ratzinger, the future Pope Benedict XVI, was prefect of the Congregation for the Doctrine of Faith at the time of the third secret's publication in 2000. Presenting the secret and the interpretation to the press, he said the vision's purpose was not to show an "irrevocably fixed future" but to "mobilize the forces of change in the right direction."

—Aug. 13, 1917. The lady again said she would perform a miracle in October and asked that the money given by pilgrims be used to build a chapel on the site of the apparitions.

—Sept. 13, 1917. The lady asked them to continue to pray the rosary "to obtain the end of the war," and she said that Jesus, St. Joseph, Our Lady of Sorrows and Our Lady of Carmel would appear during the miracle in October.

—Oct. 13, 1917. Despite the pouring rain, tens of thousands of people went to the Cova da Iria to witness the long-awaited miracle.

The lady identified herself as "Our Lady of the Rosary" and said the war would end and the soldiers would return home. After asking that people cease to offend God, she opened her hands, which reflected a light toward the sun.

Pope Francis will canonize two of the children who saw Our Lady of Fatima
Gerard O’Connell
Sister Lucia recalled crying out, "Look at the sun!" As the crowds looked on, the sun appeared to "dance," spinning and changing colors. The children also saw the promised figures of Jesus, St. Joseph and Mary.

Amazement at the "dancing sun" turned to panic when the sun seemed to hurl toward earth. Fearing the end of the world, some people screamed and ran, some tried to hide and others remained on their knees, praying for mercy. Then the sun returned to its place.

Thirteen years after Mary's final apparition at Fatima, the bishop of Leiria declared the visions of the three shepherd children "worthy of belief" and allowed the veneration of Our Lady of Fatima. However, the bishop did not recognize the "dancing sun" as miraculous.