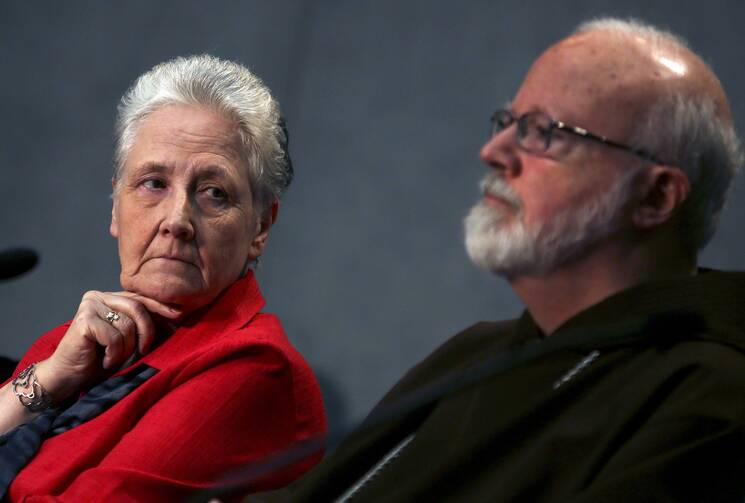 Irish abuse victim Marie Collins, the lone clerical abuse survivor nominated by Pope Francis to sit on the new Pontifical Commission for the Protection of Minors, looks at Boston Cardinal Sean P. O'Malley during their first briefing at the Holy See press office at the Vatican on May 3. (CNS photo/Alessandro Bianchi, Reuters)

The clash between a former member of Pope Francis' sex abuse advisory commission and the Vatican heated up on Tuesday, as prominent Irish abuse survivor Marie Collins challenged a top Vatican cardinal over his claims that his office had cooperated with the commission.

In an open letter, Collins pressed her case that the Congregation for the Doctrine of the Faith had ignored or scuttled commission proposals to protect children and care for abuse victims that had been approved by the pope.

In an open letter, Collins pressed her case that the Congregation for the Doctrine of the Faith had ignored or scuttled commission proposals to protect children and care for abuse victims.

Collins pointedly corrected Cardinal Gerhard Mueller's assertion that one of the congregation's staffers was a member of the board, when in fact he had stopped participating in 2015. And she noted that the commission's 2015 invitation to have another congregation official attend its meetings was flat-out rejected, though someone eventually attended a session last year.

Collins resigned from the commission on March 1 citing the "unacceptable" lack of cooperation from Mueller's office, which processes canonical cases against pedophile priests. Her departure left the commission without any abuse survivors and dealt another blow to Francis' record on combatting sex abuse.

In the days after Collins' departure, Mueller responded to her criticisms by telling Italy's Corriere della Sera newspaper that it was time to do away with what he called the "cliche" that the Vatican bureaucracy was resisting Francis' initiatives.

Mueller said the decision to scrap the proposed tribunal section inside the congregation was made because other Vatican offices "already had the competences, the tools and judicial means" to judge negligent bishops.

In her reply published in the National Catholic Reporter, Collins expressed shock that Mueller considered the tribunal a mere proposal, noting that when the Vatican announced that the pope had approved it on June 10, 2015, the official statement said Francis had already authorized resources to fund it and that adequate personnel and a secretary would be appointed.

And she questioned if the Vatican already had adequate means to judge negligent bishops, "why then has no bishop been officially, transparently sanctioned or removed for this negligence?"

"If it is not lack of laws, then is it lack of will?" she asked.

Francis has pledged "zero tolerance" for abusive priests, and he won praise for creating the commission to provide the church with expert advice on protecting children and keeping pedophiles out of the priesthood. But questions have dogged him from the start about whether he really "gets it" about abuse, given he never dealt with the issue as archbishop and has surrounded himself with cardinal advisers who themselves have botched handling cases.