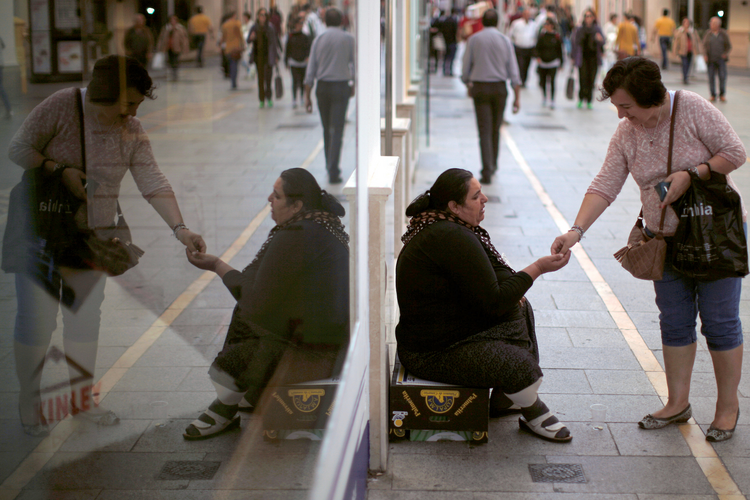 A woman gives a coin to a panhandler on Oct. 17 in Ronda, Spain. (CNS photo/Jon Nazca, Reuters)

A month after Pope Francis endorsed giving money to panhandlers, the Roman Catholic bishop in Rhode Island has posted three reasons not to.

Pope Francis was asked last month by an Italian magazine for the homeless "if it is right to give alms to people who ask for help on the street," according to a transcript of the interview posted on the Vatican website. He replied that there are many arguments to justify not giving money, such as being concerned the person will go buy himself wine. But, Francis said, "Help is always right."

He added that when people give, they should do so not by throwing coins, but by looking the person in the eye and touching their hands.

Bishop Thomas Tobin, who has previously criticized Francis, posted a Facebook message Tuesday entitled "Three Reasons Not to Give to Panhandlers." Tobin's spokeswoman said the post was prompted by recent local debate on the panhandling issue, not in response to anything Pope Francis has said.

Tobin said it can be a safety hazard if someone standing on a curb or roadway is asking for help, and said the practice enables dishonest people to prey upon others' compassion when they do not have legitimate needs. He also said throwing loose change at a panhandler is demeaning to that person's dignity.

"While it might make us feel better, in fact it sustains a very unhealthy and degrading lifestyle. Our community has legitimate and structured means of helping the poor and needy. We should support those," the bishop wrote.

Tobin also quoted Francis in his post, saying a great danger when aiding the poor is falling into "an attitude of protective paternalism."

The Bishop isn't wrong - throwing change at someone is incredibly demeaning to that person. It's also not particularly good for the dignity of the person doing the throwing. The real challenge is to hand someone a dollar and take a moment to speak with them with compassion, a longing for real equality in Christ, and looking to recognize Him in another's humanity. It will be uncomfortable. It will also be radically different to throwing money at a problem in the self-indulgent hope that one's feelings of guilt will go away. I pray Bishop Tobin will recognize the dangers of a 'protective paternalism' that would lead his flock not to give, at the risk of giving badly, rather than to give well.

Who throws money at people? You and the Bishop need to tell us that there is a problem with throwing money and this is the reason we should not give money? I don't give money to those on the street because I feel guilty or that it makes me feel good. I give because they ask and it looks like they can use it. If I choose to give someone money, what that money gets spent on is not my concern and no longer in my control. When I leave a waiter a tip I have no concern and I do not feel I have a right to dictate that they should spend it in a certain way or only buy food or pay for housing with it.

I don't recall such suspicion and apathy coming from the Gospels. With all due respect, when was the last time Bishop Tobin went without a meal or slept on the street?