Jesus does not overwhelm. He woos us instead. 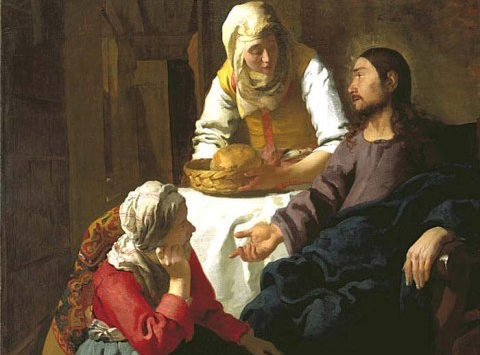 Christ in the House of Martha and Mary, by Johannes Vermeer

Why is God hidden from us? It is a fair question, which unbelievers put to us. And if a believer has never posed that question, let’s admit that his or her faith does not run in very deep waters. Ponder the question. Why would God create us, hide from us and then judge us on the basis of our confidence in God’s hidden presence? Put this way, we almost seem set up to fail.

So, why is God hidden from us? The answer, which will not be entirely satisfying to the unbeliever, is that it cannot be any other way. God’s withdrawal from the world is the only way that we can be who we are, who God made us to be.

A great contemporary theologian illustrates the issue. Woody Allen might consider himself to be an atheist, but his work performs an essential theological function, quite in line with that of the Hebrew prophets. He constantly destroys idols. He knocks down the limited divine images that we fashion for ourselves, golden calves that fall so short of the living God.

Why is God hidden from us? It is a fair question, which unbelievers put to us.

In his short film “Oedipus Wrecks,” Woody Allen plays Sheldon Mills, a highly successful New York lawyer. But Sheldon’s life has a burden. His Jewish mother humiliates him by speaking loudly in restaurants, by showing up unexpectedly at his law firm, by urging him to go slow with his goy girlfriend, by never letting him forget that he was a bed wetter. As Sheldon puts it, “I love her, but I’d wish she’d disappear.”

One day, she does, when she is called upon to assist a magician. She enters his sword box and…disappears. Even the magician is flustered. Backstage, when an irate Sheldon demands an explanation, the magician tells him: “I don’t know. It’s never happened before.” A ditzy stage girl proffers a molecular theory, but the truth is, Sheldon’s wish has been granted. His mother has disappeared.

The melody of “I’ll be seeing you (in all the old familiar places)” in the soundtrack should warn us that Sheldon might not yet be free of his mother. Indeed, three days later, investigating a commotion in the street, he hears, from the sky above him: “Sheldon, where have you been? I’ve been looking all over for you. I’ve been just discussing your problems with all these nice people.”

The face of Sheldon’s mom is hovering over Manhattan, like a Macy’s Thanksgiving Day Parade balloon. Her hectoring has not diminished by moving into the heavens. No, Sheldon’s mom has everyone in New York weighing in on his love life, his childhood, his inattentiveness to his mother.

There would be no atheists if God appeared in the sky like Sheldon’s mother. But there would also be no believers, no acts of faith. In fact, there would not be anything that we recognize as human. We would simply be puppets, passive automatons in hands of God, much like the androids are intended to be in HBO’s “Westworld.”

The unbeliever dismisses the hiddenness of God as a delusion, and even the believer cannot help but to find it distressing. Yet the truth is that God’s great gift to us, given in the very act of creation, is God’s withdrawal from us. God creates and sustains a world in which God does not need to appear.

It cannot yet, but someday science might be able to explain everything that happens within the world. But then the real questions begin. Once the “Hows” have been answered, the “Whys” will stand out with greater clarity. Why is there a world? Why is there something rather than nothing? Why do we learn and strive, love and suffer?

Why is there something rather than nothing? Why do we learn and strive, love and suffer?

Martha, in John’s Gospel, gives voice to every Christian believer when she professes, “I have come to believe that you are the Christ, the Son of God, the one who is coming into the world” (11:27). Indeed, it was his mastery over life and death, ultimately revealed in his resurrection, that led the first Christians to proclaim Jesus as the first born of the dead, the chosen one, the Son of God.

Only God can create a world that can exist, can be itself, without reference to it source. Only God can summon existence out of nothingness. Christ does this in our midst, initially when he calls Lazarus out of the tomb, ultimately when he himself emerges from it, revealing the resurrection, exposing a deeper layer of existence.

The Christ manifests the creative power of God. He quickens life from death itself, and he does so in the same gracious manner of God. He does not overwhelm. He woos. The Christ is deniable to those who will themselves not to believe, but to those who have been captivated by his beauty, his gracious and self-effacing love, which are the very marks of the divine, the Christ is, quite simply, undeniable.

I Will Raise You Up
Michael Simone

The resurrection comes by way of witness, not explanation.
Terrance Klein

Still worried about Sheldon? Here’s what happens. He seeks out a clairvoyant, though he insists that he has never believed that there are mysteries that science cannot fathom. She tells him, “It may be time to start.” Played by Julie Kavner (before she became famous as the voice of Marge on “The Simpsons”), she proves to be pathetic at the occult. But she does make a good boiled chicken—“Have some more, you’ve only had a drumstick.”—and she sends Sheldon home with potato pancakes. It is when Sheldon falls in love with this ditzy Jewish divine that his mother returns to her place on earth.

That is some theology! A goddess, made manifest in the sky, is oppressive, but, in finding someone whom we can love, right here on earth, we find ourselves and our creator. For a Jewish atheist, Woody Allen’s Christology is quite good, quite good indeed.

Terrance Klein is a priest serving in the Diocese of Dodge City and author of Vanity Faith.

I believe one of the ways Jesus woos is through His invitation, “Pray always and do not lose heart.” The Beloved Jesus wants to have conversation with those who love Him, but one may easily “lose heart” by the way Jesus ordinarily responds, unless one gets to understand not the Beloved’s “why,” but the “how.” I believe it works this way in example.

It’s Lent and say, on AMERICA online you read something about being ready and willing to help Jesus carry His Cross and you are impressed. Sometime later in bed getting ready to call it a day, as is your custom, you begin saying the Rosary and the Sorrowful Mysteries are invoked. At the Second Mystery, the Scourging of Jesus, you groan a little thinking of what Jesus is now enduring and pray, “Lord Jesus, I feel so sorry for you and ask that you let me take your place sparing you the whip.” Rosary ends and sleep takes over.

Weeks later great pain unexpectedly invades your body, sweeping from the lower right lumbar region of your back, radiating to the lower right abdomen. It is intense and something new. Suddenly a rash appears around the painful area and a doctor gives the news, “You have Shingles!" It’s a very painful experience and slow to abate. Your body feels beaten and in this dilemma words spoken a few weeks earlier prayerfully, snack you in the face, “Lord Jesus I feel so sorry for You and ask that You let me take your place sparing you the whip.” And that's exactly what has happen, the prayer has been answered and you are being “scourged.” You asked for it and you got it! Similar things happen all the time but get missed as we look the other way.

That’s the way the Beloved ordinarily answers prayer. Ordinary circumstances in life come together to perform a service of agency, no flashing lights, no voices, just ordinary realities of life. Look there for answered prayer. However should the Beloved rarely choose the miraculous, well, that’s something altogether other. At least that's how it seems to me.