Pope Francis in preface to new book: The church must be 'extremely severe' with pedophile priests 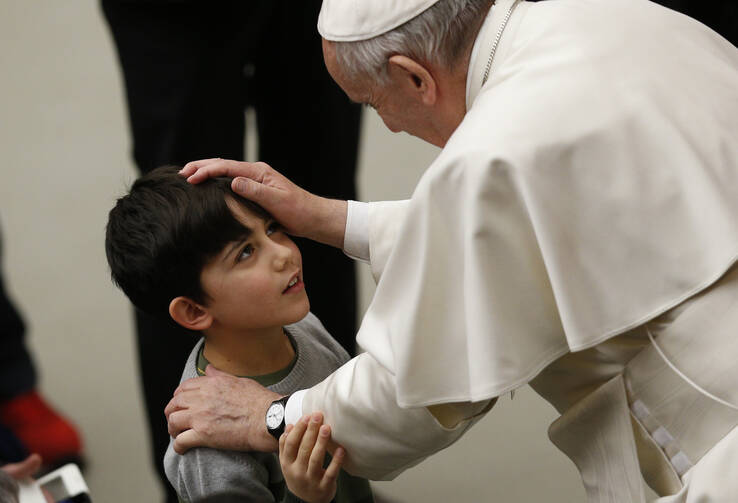 Pope Francis has “humbly asked pardon” of the families of victims who were sexually abused by priests and later committed suicide. “These deaths weigh on my heart, on my conscience and on that of the whole church,” he stated in the preface for I Forgive You, Father. The book was written by Daniel Pittet, who was sexually abused as a child but has since pardoned his abuser. It will be published this Thursday. The newspaper La Repubblica featured the pope’s preface on Monday.

Francis denounced the abuse of children by priests as “an absolute monstrosity, a horrendous sin, that is radically contrary to all that Christ teaches.” He recalled the harsh and severe words of Jesus against those who abuse children, and reminded people that in his 2016 apostolic letter, “Like A Loving Mother,” he had emphasized that the church “must protect with special affection the weak and defenseless."

The pope declared, “It is our duty to be extremely severe with priests who have betrayed their mission and with those in the hierarchy—bishops or cardinals—who might protect them, as happened in the past.”

Francis first met Mr. Pittet in the Vatican during the Year of the Consecrated Life, when the author was promoting To Love Is To Give Everything, a book based on the testimonies of religious men and women, priests and consecrated persons. Mr. Pittet spoke of the encounter with La Repubblica and said that when they met, Francis asked him “where [he] got such force, such missionary spirit,” adding, “then at the end I told him: Father, I was abused by a priest.” He said Francis “looked at me in silence with tears in his eyes, and then embraced me.”

Mr. Pittet was 8 years old in 1968 when the priest abused him, and it took him four years before he could find the courage to tell anyone. The priest was then moved from Switzerland to France, where he abused other children. Now 57 and married with six children, Mr. Pittet met his abuser last year, and he recalls that the priest “was frightened, and looked at him but never asked forgiveness. He didn’t seem to repent of the evil he had done.”

In the preface to I Forgive You, Father, Francis told his side of the encounter with this survivor. “I could not have imagined that this enthusiastic and passionate Christian man had been the victim of abuse by a priest. Yet this is what he told me, and his suffering struck me very much. I saw once again the tremendous damage caused by sexual abuse and the long and painful journey that awaits the victims,” he wrote.

Francis welcomed the publication of the book, hailing it as “a necessary, precious and courageous testimony.” He wrote that others now can read it and “discover how far evil can enter into the heart of a servant of the church.”

Francis recalled how in his trials Mr. Pittet met “another face of the church,” one that enabled him “not to lose hope in men and in God.” He also experienced “the power of prayer that he has never abandoned,” which “comforted him in the darkest hours.” Francis highlighted the fact that 44 years after his terrible experience, the author “chose to meet his torturer and to look in the eyes of the man who had wounded the depths of his soul. He held out his hand to him. The wounded child is today a man on his feet, wounded but standing.”

The pope thanked Mr. Pittet for his courageous witness and said that “a testimony like his tears down the wall of silence that covers the scandal and the sufferings.” Moreover, it throws light on “a terrible dark zone in the life of the church,” opens the path to “just reparation and the grace of reconciliation” and “helps pedophiles become aware of the terrible consequences of their actions.”

In the interview with La Repubblica, Mr. Pittet expressed his gratitude to Francis for “his very strong and courageous words of condemnation of pedophilia, the secret that kills.”

It's nice that the Pope wrote that forward for the book, but as far as actions go, he's really done nothing concrete to change the sex abuse situation. His commission is powerless and he has ignored many of their recommendations, like getting rid of Cardinal Pell and Bishop Juan Barros. And those who are known to have covered up abuse, like Cardinal Law, Cardinal Mahoney, Cardinal Brady, have never even recieved a word of criticism from him.

But no so severe of the bishops, like Mahony and Law, who enabled these priests. The words are empty as long as people like Mahony wear the red hat.

There will be many sequels to Spotlight

the vicar of george soros is a total hypocrite; whoever left their child in his hands for abuse of photo oppurtunity is akin to the parents who let michael jackson babysit their children.
remember all of the emails from wikkileaks which exposed the massive paedophile network controlling the democratic machine [not to mention the spirit cooking]. All of these are bergoglios coven; his brood of vipers. nearly 1000 in the network have already been rolled up. I would surmise the days of bergoglio are numbered;...would not be surprised if he is even the blackmail-cult kingpin.
ATTN bergoglio MENE MENE TEKEL UPHARSIN

the church has been co-opted by globalist corporate interests.
laudato si for instance is enemy subversion against the Nation of Ireland, and the West in general.

the church is becoming the enemy of the common-good of the Nation.

It is the mutual common-interest which is the community nexus in regards to life, liberty, and private property. [The end of the institution, maintenance, and administration of government, is to secure the existence of the body politic, to protect it, and to furnish the individuals who compose it with the power of enjoying in safety and tranquility their natural rights, and the blessings of life.]
It is this very 'common-interest' for example that is now being assailed by the vatican as 'selfish'; even re-writing Jesus own Words to say 'love your neighbor more than yourself'
this is a crucifiction of the Scripture. Same as 'rewriting' the beattitudes into the image of george soros united nations agendas.
this is being done to facilitate further perpetration of the islamic invasion program.
consider this invasion in light of the SJW red-terror being propogated these past few days to work insurrection against legitimate governance by our Greatest American Hero, PRESIDENT Donald J Trump. these groups, many of which are from the very same mobs financed by soros to destabilize the Ukraine a few years ago.

The point to be made, is that the blind ignorance of so many catholics in the church [those who do not know the Faith]; this is being exploited. And they are in effect being turned into communist agitators; calling for millions to storm into Europe under the black flag of islam. Nothing could be more insane; and they deserve to be repudiated and ridiculed. These are apostates and enemies of the state.

It is high time to arrest and prosecute by due process of law, every last subversive clergy-member who has stood to preach the sedition of globalism.