Top Vatican official will be special delegate to Order of Malta 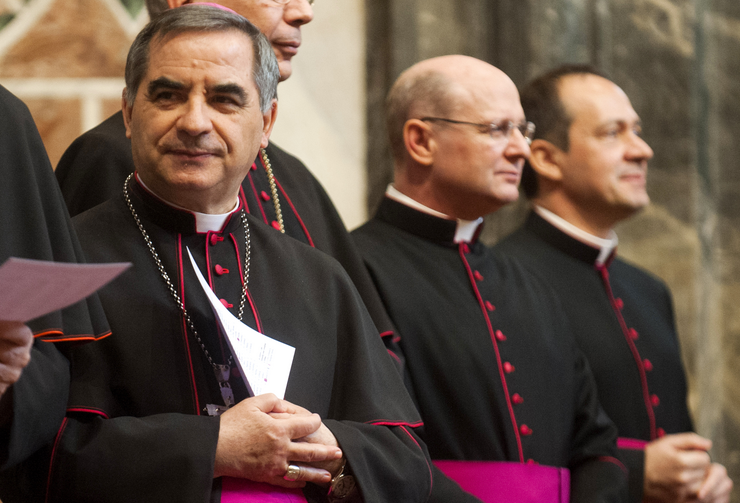 Pope Francis has appointed Archbishop Giovanni Angelo Becciu, the third highest ranking official in the Vatican and one of his closest advisors, as his “special delegate” to the Sovereign Order of Malta. Archbishop Becciu will assist in the preparation for the extraordinary chapter that will elect a new grand master and to promote “the spiritual and moral renewal” of the 900-year-old order.

In light of the dispute between the order and the Holy See, Francis said that his special delegate “will be the exclusive spokesman in all that pertains to the relations between the Holy See and the order.” It is noteworthy that in the letter of commission released by the Vatican on Feb. 4, Pope Francis makes no mention whatsoever of Cardinal Raymond Burke, whom he appointed as “the cardinal patron” of the order in November 2014. The cardinal now appears to have no role in the preparation of the extraordinary chapter and the spiritual renewal of the order.

In the letter, the pope told the archbishop that he is “to act in close collaboration” with Fra’ Ludwig Hoffmann von Rumerstein, the order’s interim chief, “for the greater good of the order and for reconciliation between all its components, religious and lay.”

He said the archbishop, who is Substitute in the Secretariat of State for the General Affairs of the Church, is “to stand alongside and support” the Mr. Rumerstein in preparing for the extraordinary chapter that is to elect the new grand master. They are “to decide together” on the modalities of a study that is to be made with a view to “an opportune updating” of the order’s constitution and statute.

Pope Francis underlined the importance of the spiritual renewal of the order. He said the archbishop is “to take care of all that pertains to the spiritual and moral renewal of the order, and especially of its professed members” so that its goals as expressed in its constitutional charter may be fully realized. Those goals are: “to promote the glory of God through the sanctification of the members, the service to the faith and to the Holy Father, and to help the neighbor.”

Pope Francis told the archbishop “you will be my exclusive spokesperson in all that pertains to the relations between the Holy See and the order.”

Pope Francis told the archbishop that until his mandate is ended, that is, until the conclusion of the extraordinary chapter and the election of the grand master, “you will be my exclusive spokesperson in all that pertains to the relations between the Holy See and the order.”

The pope concluded by granting the archbishop “all the powers necessary to decide the eventual questions that may arise in carrying out the mandate given to you.”

Congrats for the appointment and i hope things are now going really well. it is a great deal when anyone get rewards of his life time efforts. essay writers help
also gave us some important suggestions about conclusion of the extraordinary chapter and the election of the grand master.