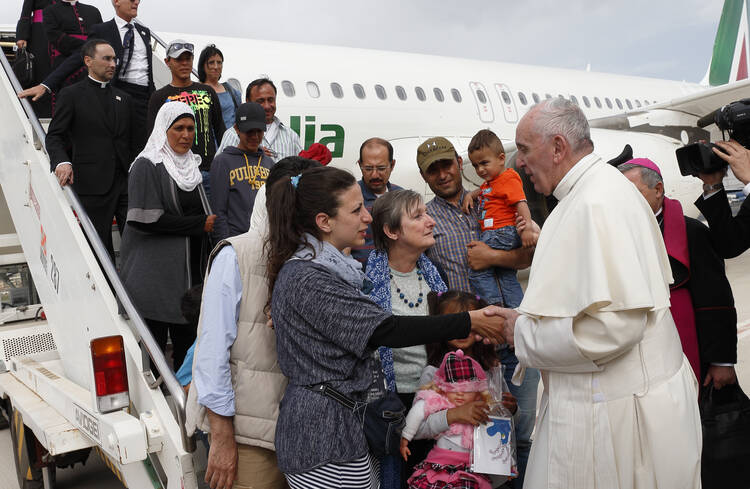 A top Vatican official has expressed the Holy See’s concern about President Donald J. Trump’s recent directives on the treatment of refugees seeking resettlement in the United States.

“Certainly there is concern because we are messengers of another culture, that of openness,” Archbishop Angelo Becciu said. He was responding to questions from journalists focusing on Mr. Trump’s executive order on Jan. 25 that temporarily blocked citizens from seven predominantly Muslim countries from entering the United States. Archbishop Becciu is the number three official at the Vatican, heading up the Secretariat of State’s Section for General Affairs.

It was the first official Vatican comment on the recent policy decisions by the U.S. president. Vatican officials are well aware that Mr. Trump’s executive orders have drawn a strong reaction from Catholic Church leaders in the United States.

“We are builders of bridges, not of walls. Christians must be strong in reaffirming this message,” the archbishop said, according to Vatican Radio.

Clearly, there is deep concern in the Vatican and in church circles in Italy about the policies being promoted by the new White House administration.

Many in Rome see these policies as contrasting strongly with the good wishes expressed in the message that Pope Francis sent to Mr. Trump at his inauguration, in which he called for “far-sighted and united political responses” to the “grave humanitarian crises” that beset the human family today.

Francis added that he would be praying that the president’s decisions “will be guided by the rich spiritual and ethical values that have shaped the history of the American people and your nation’s commitment to the advancement of human dignity and freedom worldwide.”

He concluded with words to the president that now take on a particular significance: “Under your leadership, may America’s stature continue to be measured above all by its concern for the poor, the outcast and those in need who, like Lazarus, stand before our door.”

The Executive Order was carefully crafted: for a Muslim to declare that he accepts the Constitution of the United States as the source of his highest loyalty is an act of apostasy par excellence; and apostasy is punishable by death under the Islamic law. The Sharia, to a Muslim, is not an addition to the Constitution and laws of the United States, with which it coexists; it is the only true code, the only basis of obligation. To be legitimate, all political power must rest exclusively with those who enjoy Allah’s authority on the basis of his revealed will, and America is therefore illegitimate ab initio.

Section 1 effectively demands that a Muslim gives up this key tenet of his faith in order to be eligible for admission. Its drafters knew that a foreigner who becomes naturalized has to declare, on oath, “that I absolutely and entirely renounce and abjure all allegiance and fidelity to any foreign prince, potentate, state, or sovereignty of whom or which I have heretofore been a subject or citizen; that I will support and defend the Constitution and laws of the United States of America against all enemies, foreign and domestic…”

It is sacrilegious for a Muslim to swear to this, since it means that he would be prepared to shoot a fellow Muslim, or denounce him to the authorities, in defense of his adopted homeland. A devout Muslim can become an American citizen only if in taking the oath he is practicing taqiyya, the art of dissimulation that was inaugurated by Muhammad to help destabilize and undermine non-Muslim communities. As Robert Spencer has noted, Section 1, without mentioning Islam or Muslims, arrives at the heart of the problem: “Islamic values always lead to intolerance. Islam’s guiding texts are all fundamentally devoted to separating the world between believers and non-believers.”

Since Francis gutted Jesus' teaching on marriage, I've little reason to listen to him on other issues.

Eileen Malloy, you may not know it, but early in the history of the United States, numerous of the Founding Fathers felt the same way about what they considered to be the sinister influence of the Catholic Church as you do about Islam. In fact, their view of Catholicism was similar to the way the ancient Romans felt about Christianity. (See: https://aeon.co/essays/how-an-obscure-oriental-cult-converted-a-vast-pagan-roman-empire?utm_source=Aeon+Newsletter&utm_campaign=a8c3b644a9-EMAIL_CAMPAIGN_2017_02_03&utm_medium=email&utm_term=0_411a82e59d-a8c3b644a9-68721273 ). Being of English descent, they also remembered such events in the history of Great Britain as the Jesuit-inspired plots to execute the Pope's deposition of Elizabeth I and the Gunpowder Plot.
They had a point, actually, because many Catholics--myself among them--now feel a far greater loyalty to the international community that is the Catholic and Apostolic Church than to our country of origin, and I'm pretty sure that this loyalty to Pope Francis, priests and prelates, as well as to fellow communicants, will, with many of us, increasingly take precedence over our loyalty to the United States of America, as she becomes, more and more, to many other peoples across the globe, a rogue nation.
This is especially true, I guess, for folks like me, who live our lives as expatriates. As an expatriate living in a predominantly Muslim country, however, I can attest that the picture you paint of Muslim exclusivity and expansionism is wildly exaggerated. I do not know a single Muslim here in Egypt who believes what you say they do, and, in fact, I don't think very many Muslims would take the position you say they inevitably do UNLESS their co-religionists are attacked for their faith or if that faith is demonized. They have just as many internal conflicts regarding loyalty as numbers of Catholics do, and they resolve them in the same peaceful way as the minority population of Catholics in the United States do. However, in saying what you have said here, you are joining the others who are pushing them toward radicalization, because, like some of us who are Roman Catholic, they WILL, if forced to, prioritize religious devotion over patriotism, just as the Founding Fathers of America suspected that Catholics would--and just as many of us do.