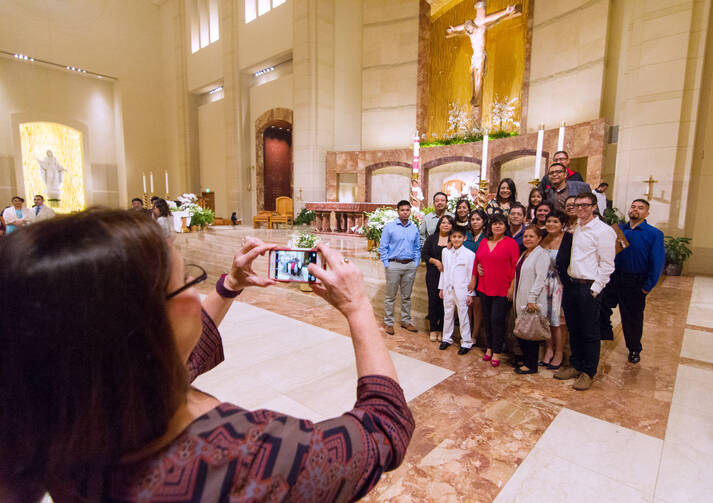 A family poses for a group photo after attending the Easter Vigil in 2016 at the Co-Cathedral of the Sacred Heart in Houston. A new book details the shift of the American Catholic population to the South and West, as well as to larger and more diverse parishes. (CNS photo/James Ramos, Texas Catholic Herald)

The American Catholic Church is changing faster than its infrastructure can keep up with. Catholic Parishes of the 21st Century, out on Feb. 1, paints a portrait of a church that is challenged not so much by hot-button political and cultural issues as it is by the quotidian concerns of leaky roofs and aging priests. Researchers from the Center for Applied Research in the Apostolate (CARA) surveyed priests and parishioners at a representative sample of churches across the country to create a fascinating census of the church’s strengths and challenges, packed with more details than it seems like this slim book could hold.

The simplest takeaway is that the Catholic Church in America is strained by the task of caring for such a large, mobile population. For instance, the distribution of American Catholics has shifted dramatically to the South and the West, and these two regions now hold nearly half of all Catholics—up from only about a third in 1985. The physical infrastructure of the church cannot keep up, leaving these growth regions underserved or forced to innovate, building megaparishes that must invent new ways of serving (or simply keeping track of) their large flocks. Since 2001, nearly a quarter of new Catholic churches have been built to seat more than 1,000 parishioners, triple the share of megaparishes built from 1950 to 2000.

Big or small, these parishes are less and less likely to have a resident priest. CARA is careful to point out that this does not exactly constitute a priest shortage; the United States has a higher priest-to-parishioner ratio than most of the rest of the world. But much of our parish infrastructure was built during what turned out to be a short-lived enrollment boom in seminaries after World War II. As a result, many dioceses that thrived during this time now have more parishes than priests to staff them. In the diocese of Green Bay, Wis., there are nearly 100 more parishes than there are active diocesan priests to staff them.

Authors Charles E. Zech, Mary L. Gautier, Mark M. Gray, Jonathon L. Wiggins and Thomas P. Gaunt do not just paint a demographic portrait of the problem; their book also takes a close look at how church leadership has tried to close these gaps, and how people in the pews feel about these measures. Canon law has changed to allow a group of priests to form a team to pastor multiple parishes. In a pinch, a parish can have no resident pastor at all and rely on a parish life coordinator to manage all the logistics of taking care of the community while a priest comes by only to administer the sacraments. Nine percent of the nearly 3,500 U.S. parishes without a resident pastor have been placed in the hands of parish life coordinators.

In the diocese of Green Bay, Wis., there are nearly 100 more parishes than there are active diocesan priests to staff them.

These stopgap measures are only reluctantly embraced by those in the pews. Only 60 percent of weekly Mass-going Catholics said that, in the event that their parish lacked a priest, they would support increasing the use of lay ecclesial ministers. Instead, they prefer to have deacons (68 percent support), retired or foreign priests (71 percent and 73 percent) or just to share a priest with a nearby parish (76 percent). The worst-case scenario, in their view, would be to lose their parish home in a merger with another parish, even if it gave them access to a resident priest. Only 50 percent of weekly Mass-goers said they would support a merger.

These survey responses are about parishioners’ preferences in a hypothetical scenario, but the book’s discussion of parish tithing makes it clear that parishes without an assigned priest feel a financial pinch. Parishes that are created through mergers, parishes served by a team of rotating drop-in priests, and parishes whose membership draws from a recently closed parish all take in between 60 cents and $1.20 less per household each week than parishes without these limitations. The small difference in giving adds up.

Parishes must resist the myth of the ‘Latino threat’
Brett C. Hoover

The Catholic Church in America is slowly catching up with its shifting flock. The recent classes of ordinands are more diverse and better mirror the multicultural populations they will serve; painful but necessary mergers and closures are taking place; and churches are opening and expanding in the South and the West. But if Catholic Parishes of the 21st Century answers the question of how the American Catholic Church will adjust to the demographic changes of the last 50 years, it also raises another question: How prepared are we to adjust to the changes of the next 50 years? Catholic Parishes makes it clear that finding the balance between rootedness and adaptability will be a constant challenge.

Leah Libresco, contributing editor for America, is the author of Arriving at Amen: Seven Catholic Prayers That Even I Can Offer.

The basic problem for NO priests are two. Lack of Bishops, Americas population has quadrupled since 1900 and only few more diocese have been created or added, and the country is way below Metropolitian church leaders compared to all other nations, were down 6 cardinals, should be at about 18. Second Bishops are so reluctant to ordain, shying away from their duties because of all kinds of scandals, no industry, profession, religion is without scandels, and even thought bishops won't ordain, the scandels are even worse. Scandals are a part of humanity; and take a lesson from other growing cathiolic countries, huge rise in bishops, priests, deacons, ministers, who don't halve to be so experienced and educated, 2 yrs for ministers and deacons, 3 years for priests, 4 or 5 years for ordinaries. Shucks if Mark Zuckerberg can run worlds largest company and formost industry with less than 4 years of education and experience, so can ordinaries. In Africa and India, largest growing Catholic population in the world, bishops are made after few years as priests, Priests are ordained with couple years of education and more and seeing men at age 19 through 22 ordained, just like in dynamic growing catholic church in early days.
Come on Bishops, be a bishop (You know Shepard), priests are just extension of your office.

Regretfully I am not able to buttress the following with source-proof, as I have forgotten where I read it, but I do remember asking a priest about it and he said, “That’s the way it was done, see Acts." I looked through the Acts of the Apostles and could not locate Scriptural proof. Unfortunately my priest-source returned to the laity and moved out of State and I pretty much forgot the whole thing.

What am I talking about? I’m referencing Ordination to the Priesthood by Acclamation, wherein a man is called forth by the gathered Assembly of the Faithful, priestless, and greatly desiring Eucharist, to confect for the assembled Church the desired Eucharist as their chosen priest. Something to do with the teaching, "The Church provides" or "suffices?"

I remember reading that a case as expressed above, happened during the Papal ministry of Pope Pius XII. It happened in an Underground Church in Europe during World War II, no Bishop, no Priest available. So on its own authority in the name of Jesus, the Assemble of the Faithful called forth some men to be priests, and they began offering Mass and providing Eucharist the Faithful greatly wanted. The story I read said that, subsequently the case was brought to Pope, Pius XII, who validated what the Faithful had done and the men called forth continued their priestly ministry. Some women were also called forth by the Assembly and their case was also reviewed by the Pope who declared them invalid. All of the women accepted the decision except one, who continued to function in a priestly manner.

Now the question. If in fact men may be validly called forth by the Assembled Church to priestly service, why can it not be done in our day to help alleviate the priestly shortage? Maybe they can be considered as ordained in the Simplex Mode, serving as priest in all ways except regarding the Confessional, which because they are validly ordained they may certainly do but only in dire need. This is how priests in the Simplex Mode function.

Frankly I don’t know if that Mode is still in use, but I do know that at one time years ago in monastic communities some members were thus ordained serving essentially as “Mass Priests.” Incidentally the American priest and now Servant of God heading to Beatification Fr. Solanus Casey, OFM Capuchin, was a Simplex Priest and functioned as Monastery Doorkeeper. Thousands flocked to him for spiritual healing and some he also physically healed. I was privileged to serve two of his Masses and to get his Blessings. Hope that some of this may be helpful in solving our priest shortage.

I'm late to making this suggestion ... but I think you'll find what you're looking for in the several books on church and ministry that Edward Schillebeeckx published in the 1980s. For the life of me I don't understand why we aren't reading and discussing him in every local church in the world.

The essay does not ask the big "Why?" About that changing demographic--it's not so much a change in where but a loss of Faith in traditional Catholic population centers and the rise of immigrant populations elsewhere that bring their cultural influences with them. Who is to say that those new residents will not also lose their Faith eventuality? The polls show a rise in "nones" as a belief system. The other demographic, the monumental loss of priests since the 1960s. Obviously priests die, and if they are not replaced you do not have a ministerial church. You can neither teach nor provide pastoral care. I know my opinion may not be welcomed, but it seems to me the cause of the priestly shortage is the liberal Protestantization of the priesthood. When the Church begins to look more and more like a social services NGO, it loses the unique idea that it is the Body of Christ. Not so special anymore. Perhaps when such priests meet their end, they will be replaced by more traditional priests and they in turn will recapture the loss of Faith across the country, and their practice model will spur a rise in seminarians.