How diversity is keeping this Boston parish from closing 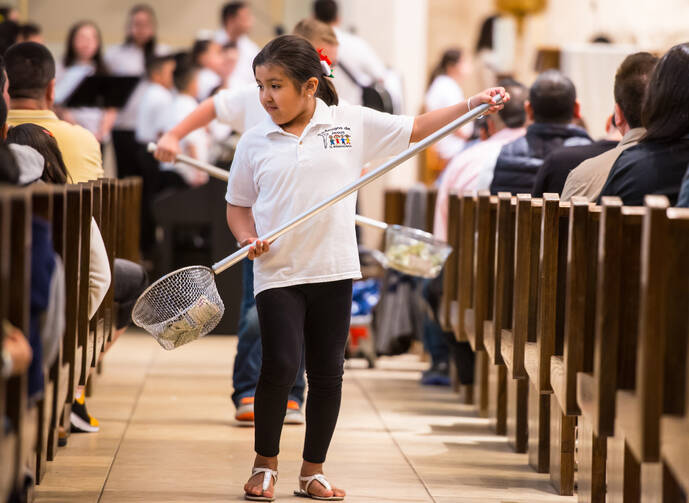 When Msgr. Francis Kelley arrived at Sacred Heart Parish in the Roslindale neighborhood of Boston almost 30 years ago, the predominant ethnic groups represented at Masses were Irish and Italian. These groups still have a sizeable presence in the parish, but the Latino and Haitian communities, small in the late 1980s, have grown considerably. West Africans too do not go unnoticed in the mix.

There were some growing pains as the demographics shifted, but Monsignor Kelley said his parishioners have grown increasingly proud of their diversity, which is reflected in the parish school population as well as at Mass. And while many churches and Catholic schools throughout the Northeast have struggled to keep their doors open, Sacred Heart has embraced its diversity as an opportunity to flourish.

According to Georgetown University’s Center for Applied Research in the Apostolate, the number of parishes in the United States peaked in 1990 at 19,620, declining from there to 17,337 in 2015. Catholic schools have had it even worse. There were half as many Catholic elementary schools in 2015 as in 1965, with about one-third as many students. Still, the Catholic population grew steadily in those years, helped along by a surge in the Latino population across the United States.

Sacred Heart is among the parishes that have welcomed the new wave of Catholics. “We work to bring everyone in,” Monsignor Kelley said, the operative word being everyone. “I don’t want to turn it into a Hispanic parish or a Haitian parish. If we’re going to move ahead, we better find a way for all of us to worship together as well as learn together.”

Sacred Heart School was one of the first in the Archdiocese of Boston to partner with the Catholic Schools Foundation when it launched a recruitment initiative in the Latino community in 2008. It has since grown into one of the foundation’s largest beneficiaries, and fully one-third of its student body is Latino.

Megan Adzima, director of allocations and partnerships at the foundation, says many other parish schools could benefit from similarly concerted recruitment efforts.
“One of the missing pieces is that school leaders might not know how to make that first step,” Adzima said. “They say ‘I know I have this community in my church, but I don’t know where to start.’”

One problem is cultural competency. Parish school staffs are dominated by people who reflect a different church. The latest data show 54 percent of all school-age Catholics are Latino. Yet Latinos make up barely 3 percent of Catholic school students, an even smaller portion than non-Catholics. And they are only about 12 percent of teachers in schools that explicitly identify themselves as serving Latino communities.

While Monsignor Kelley admits Sacred Heart School does not have enough Latino or even Spanish-speaking staff members, he and the school’s principal, Monica Haldiman, have pushed training around cultural competencies. Haldiman recognized immediately the value of helping everyone better understand new cultures and how they fit into the educational context.

Still, she is part of a distinct minority among Catholic schools nationwide. In a Boston College survey of Catholic schools serving Latino families, fewer than one-quarter of responding principals had received training about Latino culture.

Another systemic problem is what Hosffman Ospino, an assistant professor of Hispanic ministry and religious education at  Boston College, calls a silo mentality. In a report that came out last winter based on the survey “Catholic Schools in an Increasingly Hispanic Church,” Ospino and his co-author, Patricia Weitzel-O’Neill, write that important connections between Catholic education and Hispanic ministry are regularly missed.

At Sacred Heart, Monsignor Kelley makes sure that the parish and the school are not in separate silos; but within the Archdiocese of Boston, he says, Catholic schools and Hispanic ministry do not communicate and Catholic school leaders rarely share best practices with each other.

“Everybody has got so much to face in their own situation, we cannot choose to spend time building up a collaborative relationship with other schools,” Monsignor Kelley said.

Still, there is reason to try. Catholic schools across the Northeast are at risk of closing. Better engaging Latino populations and sharing the most effective ways to do so could be key to their survival—and the only way to serve the youth majority in the Catholic Church.

Show Comments (
2
)
Comments are automatically closed two weeks after an article's initial publication. See our comments policy for more.
William Rydberg
6 years 3 months ago
The key is public funding of Parochial Schools. The locals have had a "free ride" because of timidity of the historically self-concious clerical attitudes influencing American Catholic opinion on the matter. American Catholics self censor their own entitlements. This is one of the reasons why the empowerment of Vatican I I for the Laity was stressed. The Laity are full American Citizens and ought to see this as their Right. FULL FUNDING OF CATHOLIC PAROCHIAL SCHOOLS NOW! We are Church! in Christ,
L J
6 years 3 months ago
Ecelente artículo Sra. Garcia. Felicidades My family lives on the east coast and my career is in the medical field. We attend the cathedral in our diocese as our parish and I was a member at one time on the cathedral social justice committee. Whenever I suggested to my committee colleagues that we should do outreach to Latinos in our area, I met a silo rigid heart. Their argument was that a Latino parish ministry already existed in the diocese, across the river from us, and that Latinos "should" go to the Latino parish ministry if they needed anything. I pushed back stating that we Latinos are found everywhere, not just on the other side of the river nor to a geographic radius within a diocese. I further argued that the Cathedral, flush with cash and centrally located in our city near Downtown, needed to reach those Latinos in our midst. Latinos are found on the streets, in the city park across from the Cathedral where they receive food with the homeless, at local second hand / consignment stores, markets and medical clinics where I tend to them. Yet the committee members would not budge. It was a "duplication of services", they said. I responded saying, "so is collecting food for the poor". I was shut down, dumbfounded and disappointed. These are well meaning people yet I eventually dropped my committee position as the only Latino. The silo mindset is sadly very pervasive within our parishes. Having one Latino parish diocesan ministry is not enough. We dont send the poor or those seeking Eucharist to assigned parishes. You might consider exploring this theme in future articles. Que Dios le bendiga