Who will Trump pick to be his ambassador to the Vatican? 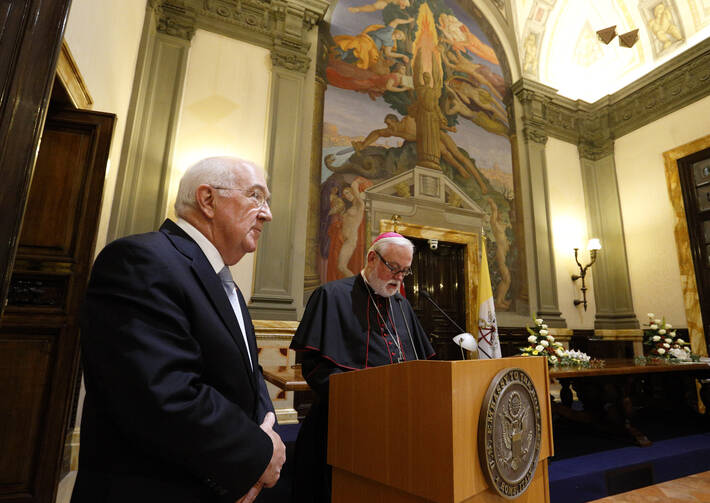 Having won the presidential election—with a slim majority of Catholic votes—President-elect Trump will soon nominate a U.S. ambassador the Holy See, a spot first filled in 1984 by President Ronald Reagan.

The field, of course, is wide open, as Mr. Trump has bucked conventional wisdom in several of his more high-profile appointments thus far.

And while the appointment is probably a few months off, there are some names being bandied about as possible replacements for current Ambassador Ken Hackett, the previous head of Catholic Relief Services.

Back in September, in an effort to shore up support from undecided Catholic voters nursing a Catholic “never Trump” hangover, the Trump campaign announced a Catholic advisory council.

RELATED: Head of Trump’s Catholic Advisory Group says It’s All About the Judges

It is possible his eventual nominee will come from this council, as a reward for early support.

For example, Rick Santorum was a member of the council and one of Mr. Trump’s earliest supporters—so early, in fact, that the former U.S. senator from Pennsylvania appeared alongside Mr. Trump at a campaign rally while still seeking the G.O.P. nomination himself.

Mr. Santorum was, arguably, the most high-profile Catholic on Mr. Trump’s advisory council, and he is someone who takes his Catholicism seriously. A member of the Knights of Malta, he also attended a high-profile Opus Dei conference in Rome in 2002.

That Pope Francis and Mr. Trump clashed a bit in the months and weeks leading up to the election might help Mr. Santorum’s chances in an odd way. Mr. Santorum, the father of eight children, took offense with Pope Francis when he suggested that Catholics need not breed “like rabbits.” Sending Mr. Santorum to Rome could be a way of sending a message to Rome.

Then there is Kansas Gov. Sam Brownback, who signed on to support Mr. Trump in September. Mr. Brownback holds conservative views on social issues and he is praised by Republicans for pushing through tax cuts in his state.

Former Oklahoma Gov. Frank Keating, whom U.S. bishops appointed to investigate clergy sex abuse in 2002 (he resigned a year later, citing a lack of cooperation from some prelates), is another possible choice.

If Mr. Trump wants to show that he does not mind individuals who supported one-time rivals, he could go with Mary Matalin, who has advised each Republican president since Mr. Reagan.

An early supporter of Jeb Bush’s presidential campaign, Ms. Matalin announced in May that she was no longer a registered Republican, but she nonetheless expressed qualified support for Mr. Trump; eventually she signed on to his Catholic advisory council. Ms. Matalin, married to Democratic political operative James Carville, has a strong media presence, and her nomination would add a high-profile woman to an administration currently filled mostly by men.

A surprise pick that could signify Mr. Trump’s willingness to look beyond his circle of supporters would be Carl Anderson, the head of Knights of Columbus. Nominating Mr. Anderson would throw a bone to Mr. Trump’s socially conservative base, as the Knights, under Mr. Anderson's leadership, spent millions fighting same-sex marriage across the country.

About three months before the election, Mr. Anderson, who held several posts in the Reagan administration, said Catholics cannot vote for candidates who support abortion rights, interpreted as a shot at Mr. Trump's rival, Hillary Clinton. In recent years, the Knights have pivoted away from the U.S. culture wars, focusing on the persecution of Christians abroad. This focus would align with a key priority of Pope Francis.

Perhaps something of a dark-horse candidate for the post is Joe Cella, a Michigan-based communications consultant who founded the National Catholic Prayer Breakfast, which has attracted many high-profile Republicans since it began in 2004. Mr. Cella was the leader of Mr. Trump’s Catholic advisory council and he was a frequent defender of Mr. Trump in media leading up to the election.

More than a ceremonial role, the U.S. ambassador to the Holy See frequently plays host to high-profile American Catholics visiting Rome and facilitates dialogue between the U.S government and the Vatican on a range of issues important to both. In recent years, for example, the Obama administration and the Vatican have shared an interest in fighting human trafficking and slowing climate change.

Pope Francis has also shown a willingness to use the Vatican’s vast diplomatic corps in international diplomacy, which makes the post even more important. President Obama praised Pope Francis and the Vatican for their role in helping to thaw relations between the United States and Cuba.

It is not clear who is advising Mr. Trump on candidates for the post, which has always been filled with a Catholic.

But Cardinal Timothy Dolan of New York met privately with Mr. Trump and his wife Melania at Saint Patrick’s Cathedral in October, and the onetime Trump skeptic will also be on hand for Mr. Trump’s swearing-in later this month.

Update, Jan. 19: Recent developments suggest that two names mentioned as possible candidates for U.S. Ambassador to the Holy See may not be in consideration after all. In an email to America on Jan. 14, Mr. Cella, the head of Mr. Trump's Catholic advisory council, wrote, "While generous to even be considered a dark horse, my name has not submitted to be considered for Ambassador to the Holy See, nor will it be." Meanwhile, the recent announcement that Mr. Santorum has joined CNN as a political commentator may signal that he is not under consideration by the Trump administration.

Michael J. O’Loughlinis the national correspondent for America and author of The Tweetable Pope: A Spiritual Revolution in 140 Characters.

@MikeOLoughlin
Show Comments (
1
)
Comments are automatically closed two weeks after an article's initial publication. See our comments policy for more.
Lisa Weber
6 years ago
Trump's appointment of ambassador to the Vatican is mostly irrelevant because he is going to spend his entire presidency awash in scandals, crises, and corruption. With any luck, his entire presidency will be over in three months.