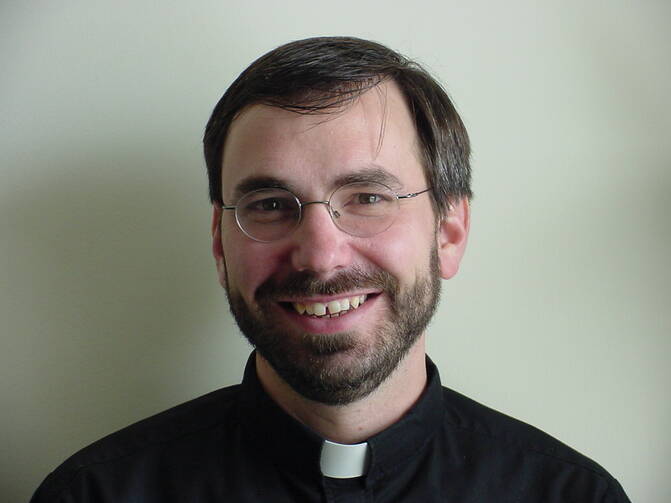 Mark Thibodeaux, S.J., is a Jesuit priest, spiritual writer, spiritual director and master of novices at St. Stanislaus Kostka Jesuit novitiate in Grand Coteau, Louisiana. A Louisiana native, he holds degrees in psychology, philosophy and theology from Loyola University New Orleans and from Weston Jesuit School of Theology in Cambridge, Massachusetts. Prior to joining the novitiate staff in 2007, Father Thibodeaux served as a teacher and campus minister at Strake Jesuit College Preparatory in Houston.

Fr. Thibodeaux writes regularly on topics of Ignatian spirituality. His books include Armchair Mystic: Easing into Contemplative Prayer, Reimagining the Ignatian Examen, God's Voice Within: The Ignatian Way to Discover God's WillandGod I Have Issues: 50 Ways to Pray No Matter How You Feel.

I recently interviewed Fr. Thibodeaux by email about the Ignatian practice of discernment of spirits.

What does “discernment of spirits” mean to you?

All of us make countless decisions all-day, every day. Each of them—even the itty-bitty ones—make an impact on our lives and on the world. Most of the time, we subconsciously make those decisions based on desires and repulsions deep in our gut. We don’t really discern where those movements come from. We just react to them. Discernment of Spirits is all about detecting the sources of our interior movements—whether they come from a good source or a bad source—so that we can better decide how we want to respond.

Where does discernment play a role in Ignatian spirituality?

Ignatian spirituality begins with the premise that God is present in every moment and every bit of matter in the universe. God wants to play a role in our every decision. Humans are called to praise, reverence and serve God through our every decision and action. Discernment of Spirits helps us to determine which actions of ours will bring about God’s greater glory and also will—in the words of St. Ignatius—“help souls.”

What are some distinctive features of the Ignatian approach to discernment of spirits?

Probably the most surprising feature of the Ignatian approach is the premise that God’s will can often be discovered in our “great desires.” Much of Christian spirituality presumes that our desires are bad and will lead us to sinful actions. Ignatius believed that our problem was not desiring too much but rather desiring too little. He believed that we sin not because we’ve followed our desires but because our desires are “disordered.” That is, the whole collection of our desires are placed in the wrong order, leaving us to follow petty, superficial desires rather than the great big desires that God has placed in our hearts. What are these “great desires?” Ultimately, they are variations of actions that will lead to faith, hope and love for God and our fellow neighbor. If we do the work of discernment in our prayer, we will discover these great desires and follow them rather than the petty, superficial ones.

In which areas of your ministry as a Jesuit priest have you found yourself applying Ignatian discernment of spirits?

In all of them! But especially in my work as novice director for the Jesuits. I spend all my days helping men determine if God might be calling them to be a Jesuit priest or brother, and, if so, what changes in their lives are called for in order to be on the right road toward that great calling. When I took the job, my predecessor said to me, “Your profession now is that of Discerner.” I have found that to be very true.

What are the “Rules for Discernment” in the Spiritual Exercises of St. Ignatius?

The Rules for Discernment can be found in the appendices of the book of the Spiritual Exercises, written by St. Ignatius. There are two sets of rules: Rules for the First Week and Rules for the Second Week.

What do these Rules teach us?

They are written by Ignatius to help us determine the sources of our movements towards or away from one action or another. If these movements within us are from a good spirit—that is, a spirit that leads us ever closer to God and God’s Kingdom on earth—then we will choose to follow them. If they are from a bad spirit—that is, from a spirit that leads us away from God and God’s Kingdom—then we will want to ignore or resist them.

The Rules teach us that sometimes we are in a state of spiritual consolation wherein the good spirit is leading us ever closer to God and the Kingdom. Sometimes we are in a state of spiritual desolation wherein we are inclined away from God and the Kingdom. The problem is that if we do not stop and think about it, we might be in a different state than we’re presuming. We might think that we’re in consolation when we are in fact in desolation, or vice versa. The Rules, then, are designed to teach us to determine our present state-of-being so that we can decide what to do about it.

How do you use these rules in your ministry as a Jesuit novice director?

I try to teach the novices how to determine whether or not they are presently being stirred by a spirit of desolation or by a spirit of consolation. Sometimes, it’s a little tricky to determine. I try to teach them the subtleties of the movements of the spirits so that they can better determine God’s will for their lives, both on the mundane, day-to-day level and on the great, big vocational level.

What are some of the graces you’ve experienced from your own process of discernment?

Ultimately, practicing discernment in my own life has led me to grow ever closer to God the Father and to Jesus Christ. They have helped me to notice when I’m being tempted to act based on “lower passions” such as anger, resentment, fear, lust for superficial pleasures, power-grasping and so on. Because I can better detect these movements inside of me, I can name them aloud to God and myself. Then, they don’t have so much power to control me. This leaves me free to follow my “great desires,” for concrete acts of faith, hope and love.

What are some of the challenges you’ve faced in your experience of discernment?

After you’ve grown more mature in the spiritual life, you are not as tempted by grave sins. You truly desire to do good. But, unfortunately, the difficult work of discernment is only just beginning. Now, you are called to discern God’s greater glory. You are called not just to do good things but to do the best things you could possibly do—the things that will lead to the most faithful, hopeful, loving acts. The problem is that inside you is a spirit that will try to move you to lesser goods. If this false spirit can’t succeed in tempting you with bad things, then it will tempt you with less good things. So, the great challenge is to determine what will bring about God’s greater glory.

Another great challenge is detecting when I am in a state of “false consolation.” Ignatius describes this state as a time when I believe that I am in sync with God and by all appearances, I am. But, in fact, the false spirit has led me down a blind alley. I am feeling good and even looking good to others, but I am not actually following what God is really calling me to do. Ignatius says that the false spirit can appear as an “angel of light”—that it can look like a holy movement from God when, in fact, it will lead me away from my true vocations in life. For example, a married man might feel moved to spend more and more time volunteering at his church, while God would have him paying more attention to his wife and children. Volunteering appears to everyone as a good and holy thing, but God might be calling an individual to something else. This discernment of extremely subtle movements is tricky stuff and will require years of practice and training.

What advice would you give someone who wants to use Ignatian spirituality for the first time to discern a minor or major life choice?

Do you have any final thoughts or words of wisdom?

Sometimes, people feel intimidated and overwhelmed by discernment of spirits. It seems a daunting and difficult pursuit. But we should remember that God wills for us to come closer and God wills for us to have a joyful, productive life of love. If we simply make an effort, God will come running to us as the prodigal father ran to his returning son. I might be intimidated by the notion of looking for God if it weren’t for the fact that God desires to be found. God makes it easy by doing all of the heavy lifting for us. We merely need to show up and do our work. God will rush in to lead us to God’s very self.

Sean Salai
Show Comments (
3
)
Comments are automatically closed two weeks after an article's initial publication. See our comments policy for more.
Crystal Watson
5 years 7 months ago
When I was first introduced to Ignatian spirituality and the discernment of spirits, I was so relieved to learn that there was the belief that God works directly with us, that our desires don't have to be crushed and forgotten, that there's a kind of method to help figure stuff out.
Ruben Useche
5 years 7 months ago
I really enjoy reading this approach to a Ignatian Spirituality and discernment of spirits. May God bless all the Jesuits and their work in his world. AMDG
Sean Salai, S.J.
5 years 7 months ago

Thank you all for reading. Let's continue to pray for God's guidance in our discernment.